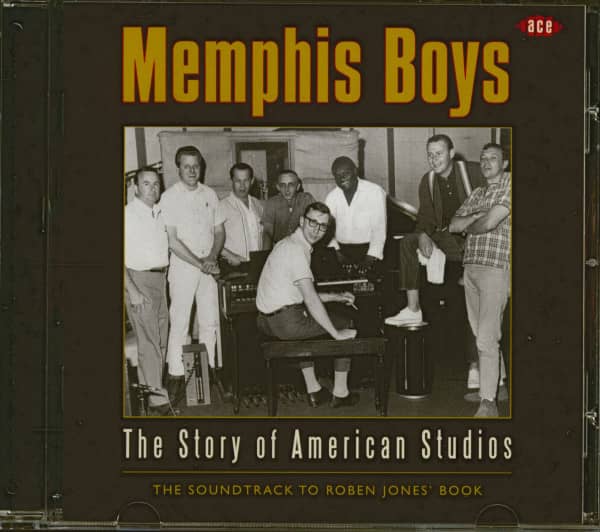 P Secure bonuspoints now
Description
Learn more about Various
Review 0
Description
(Ace Records) 24 tracks - 28 page booklet There can be few with an interest in the music of the... more
Close menu

There can be few with an interest in the music of the American South who didn’t welcome the recent publication of Memphis Boys, Roben Jones’ essential history of American Studios.

Established by songwriter-producer Chips Moman and his business partner Don Crews in 1964, it took a couple of years for American to find its true audio identity, but once the in-house group of key musicians – the Memphis Boys of Roben’s title – were all in place the steady trickle of hits and future classics quickly became a flood. Thanks to those players – Tommy Cogbill, Reggie Young, Bobby Emmons, Gene Chrisman, Dan Penn, Spooner Oldham and others – the American sound became as important a part of recording history as that which emanated from the studios of Motown, Cosimo’s, FAME and Memphis neighbours Sun, Stax and Hi.

The first Hot 100 biggies to be recorded at American – James & Bobby Purify’s ‘Shake A Tail Feather’ and Oscar Toney Jr’s ‘For Your Precious Love’ – were taped at the same session in March 1967, around the same time as Dan Penn was putting the Box Tops through their paces on ‘The Letter’, one of the biggest hits of 1967 and American’s first worldwide chart-topper. Not a bad year by anyone’s standards.

How quickly American’s stock rose in the eyes of others – particularly the companies that used the studio and the Memphis Boys on a regular basis – can be assessed by the fact that, by 1968, American was entertaining a client roster that included Neil Diamond, Petula Clark, B.J. Thomas, Dionne Warwick, Dusty Springfield and a local boy by the name of Elvis Presley who was looking to make his music as relevant as it had been 15 years earlier.

Although this collection doesn’t contain every major hit that came out of the funky little studio on Thomas Street, Memphis (we’re saving some for a possible second volume), as a listening experience it’s hard to beat – particularly when enjoyed in conjunction with Roben’s brilliant book.