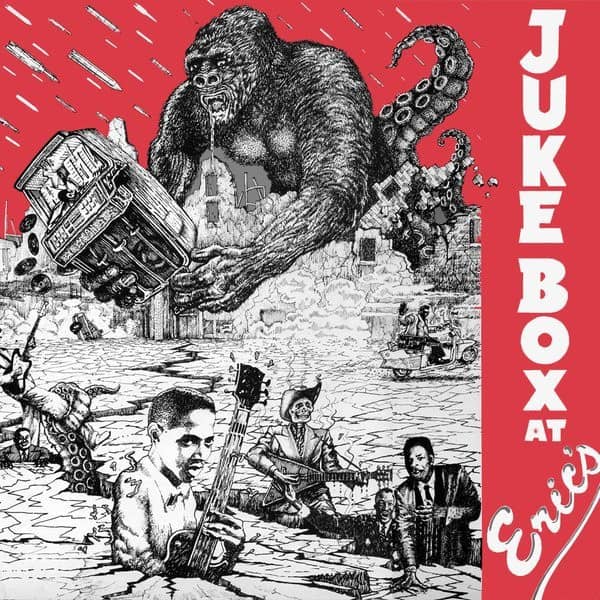 This special red vinyl, limited edition 'Roger Eagle Commemorative Edition' is a long overdue tribute to the legendary music promoter and DJ, Roger Eagle.  This special red vinyl limited edition issue features 9 tracks featured on the original 1980's LP and 9  new tracks specially selected by Steve Hardstaff, renowned pop-artist responsible for the original stunning artwork and for this new version, Norman 'The Cat' Killon (original Eric's DJ) and David Gillespie (Vee-Tone Records).  Some of these new tracks were intended to be included on the volume 2 that never happened, others were favourites of Rogers or specially selected to fit in with the original Eric's concept.

The Juke Box At Eric’s LP was inspired by the jukebox in Liverpool’s premier 1970s Punk venue, Eric’s.  Eric’s was run by Roger Eagle, Ken Testi and Pete Fulwell of Probe Records.  Compiled by record collector, music promoter and DJ Roger Eagle, ‘Juke Box At Eric’s’ provided the perfect platform to introduce record buyers to the ‘greasy’, ‘sleazy’ side of rock n roll!

A true music educator, Roger was just hugely influential across multiple music ‘scenes’ from the 1960’s to 1990’s, from gritty Rhythm & Blues to Blues to Dub Reggae to Punk to Doo Wop and to Rockabilly and on and on…. he loved ‘em all!  Without Roger Eagle we would not be listening to many of the records that we now regard as club classics, he was in every sense a true pioneer of music.