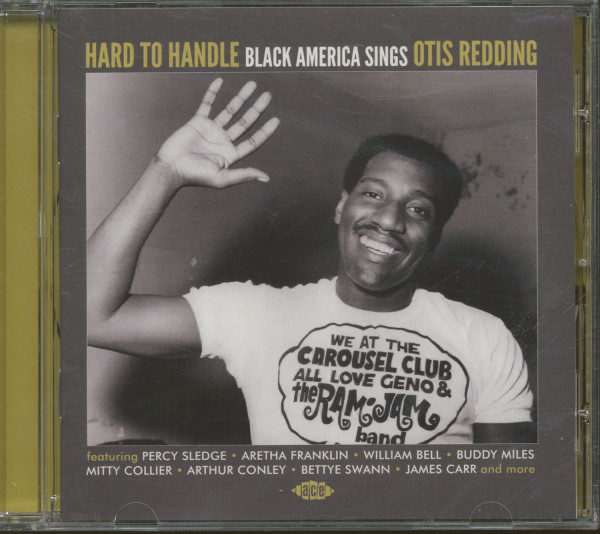 (ACE Records) 25 tracks - Otis Redding was a great songwriter as he was a singer. Here are 25 of his best compositions reinterpreted by some of the biggest names in 60s and 70s soul.

His achievements as a singer may cast a giant shadow over everything else he achieved. Anyone with a passing interest in music should be able to tell you that Otis Redding wrote ‘Respect’ and ‘Dock Of The Bay’ – that’s a given. But the vast majority of his many other singles had an Otis composition or co-write on at least one side, while almost all of the albums released during his lifetime featured additional Otis Redding copyrights. A prolific tunesmith and savvy A&R man, Otis also found time to write songs specifically for Arthur Conley and others whose careers he hoped to boost.
Otis wrote a staggering number of quality songs in a very short period of time. In fact the more Otis wrote, the more he wanted to write: in the few weeks leading up to his death, he went into Stax’s McLemore Avenue studio and cut around 30 new songs, leaving behind enough material for a trio of posthumously released albums which, for many fans, are better than many of those that came out while he was still alive.
There’s no way of telling how Otis would have progressed as a songwriter had his plane not crashed in December 1967, but the unreleased songs he left behind give a pretty good indication that he was moving in interesting and special directions. The quality of many of those posthumously issued compositions was quickly recognised by his peers. Fine versions of several of them, by Buddy Miles, Etta James, Patti Drew, Percy Sledge and others, appear in “Hard To Handle”, the latest volume in Ace’s occasional “Black America Sings” series.
As befits one of the greatest purveyors of a soul ballad, many of the best songs here allow their singers to tug at the heartstrings in the way Otis’ own versions still do. A significant number are performed here by women, who seemed to gravitate to Otis’ catalogue in the wake of Aretha’s blockbuster success with her revival of ‘Respect’.
But as well as the ballads there are numerous great examples of Otis’ up-tempo work, exemplified by his protégé Arthur Conley’s romp through ‘Wholesale Love’ and an alternate take of Otis’ own Northern Soul floor-filler ‘Loving By the Pound’ (written for Bettye Lavette, apparently!). There are more previously unissued treats here from Mitty Collier and Arthur Conley, as well as several sides receiving their CD debut.
Otis’ skills as a songwriter were patently second to none and it’s hoped that “Hard To Handle” will increase perception of just how important an all-rounder he was, and how long his career as a singer-songwriter might have sustained if the Grim Reaper hadn’t had other plans.
By Tony Rounce