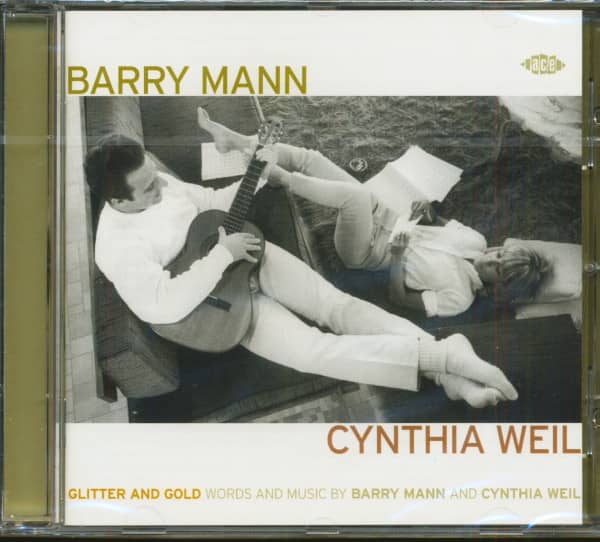 Having recently compiled the work of Goffin & King and Greenwich & Barry, it’s now time to spotlight the third in the trinity of great New York songwriting couples, Barry Mann & Cynthia Weil. As with the previous collections, “Glitter & Gold” – the latest in Ace’s writer series – is another hugely satisfying cornucopia of hits, obscurities and bona fide pop standards.
Barry Mann first met Cynthia Weil back in 1961, while both were serving their apprenticeship at Al Nevins and Don Kirshner’s Aldon Music publishing house. Hitting it off immediately, they penned their first composition together soon after and were wed before the year was over. Remarkably, over 45 years and 100-plus hits later, the couple are still together, both professionally and as husband and wife. Compiling a mere 26 song CD from this substantial portfolio brimming over with pop classics is certainly an unenviable task.
Having said that, is there a more perfect way of kicking off a Mann & Weil compilation – hell, any 60s pop compilation – than with Mama Cass Elliot’s peerless ‘It’s Getting Better’? This joyous celebration of the sweet contentment of love was one of three of the couple’s numbers brilliantly interpreted by Cass. Other gems to be cherry-picked by compilation guru Mick Patrick include Gene Pitney’s hit version of ‘I’m Gonna Be Strong’, B J Thomas’ take of ‘I Just Can’t Help Believing’ (pre-dating Elvis’ reading by a year) and the affecting social commentary of the Vogues’ ‘Magic Town’. Also included is the fabulous (and new-to-CD) ‘I’d Be So Good For You’ by Joanie Sommers, Bruce Johnston & Terry Melcher’s soaring and uplifting ‘Girl, It’s Alright Now’ and Donna Loren’s previously unissued ‘That’s The Boy’.
Cynthia’s intelligent and witty way with a lyric would often provide a social document of the times, while neatly sidestepping any hectoring or finger-pointing. This, together with the duo’s ability to move and adapt with the musical times – switching from brash girl group sounds (the Girls’ ‘Chico’s Girl’) to gritty city soul (‘Arthur Alexander’s ‘Where Have You Been’) to smooth soft pop (Nino Tempo & April Stevens’ ‘The Coldest Night Of The Year’) with consummate ease – always kept Mann & Weil ahead of the game. And though there was a two-year spell of separation in the 80s, they’ve more recently expanded their palette to include Broadway musicals and film soundtracks, while still continuing their run of sophisticated pop nuggets, as well as being honoured in 2000 as the writers of the most performed song of the 20th century for ‘You’ve Lost That Lovin’ Feelin’’. Their songbook is so deep and wide – and the standard of what is included so high – that you barely notice the absence of that song here.
What a legacy. Sample it here.
HARVEY WILLIAMS