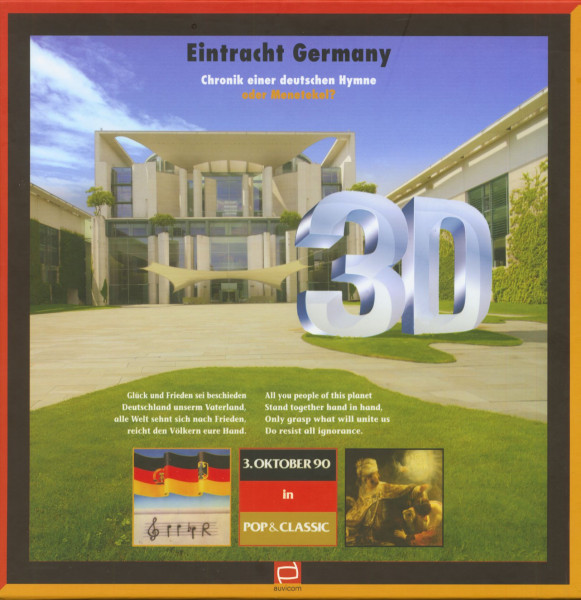 On 10th May 1988 Erich Honecker, Chairman of the State Council of the GDR, received a mailing from West Berlin bearing a 30cm vinyl record. Sender: music and film producer Dietmar Püschel, whose idea was to achieve a ''unification'' of the two national anthems of the two German states. He was not only interested in a combination of the lyrics of both anthems; he also had the melodies combined with the lyrics of the other anthem. Honecker rejected the proposal.
Two years later, Püschel sent copies of a 30cm long-playing record entitled '3. Oktober '90 in Pop & Classic' to important federal and state politicians of the time. The idea was to convince politicians of a new, contemporary national anthem for the reunited Germany with a new recording under the title ''Deutschland einig Vaterland'' (with a large choir and orchestra). This proposal was also widely rejected, but the suggestion of a new common national anthem was at least considered worthy of discussion.

This box contains a large, heavy bound book with more than 100 illustrations, an introductory text in German and English, the documentation 'Deutsche Nationalhymnen' (German National Anthems) by Dr. Heike Amos in an updated and extended German version, the new anthem on a 30cm vinyl record with the original version from 1988 and the remix 'Oktober 1989 Leipzig Version', 2 compact discs with hymn variations and sound documents including the reproduction of the original CD '3. Oktober '90 in Pop & Classic', and finally sheet music with the German and English lyrics.