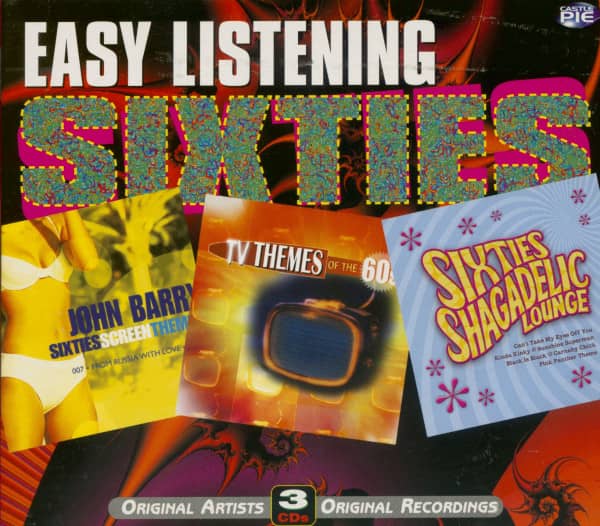 king of screen composers, was born John Barry Prendergast in 1933, grew up in York, and spent his youth watching films in the movie theatres owned by his family. After national service derailed his ambition to be a concert pianist, he formed the John Barry Seven in 1957 and found work backing pop stars like Tommy Steele and Frankie Vaughan. HIS first soundtrack success came in 1959 with Beat Girl, starring Adam Faith, and in 1962 Barry was asked to arrange the title theme for the first James Bond picture, Dr No.

Since then, of course, his name has been inextricably linked with 007's, the winning combination represented here by the title music for the second, probably best ever, Bond film, From Russia With Love. Enjoy, too, the evocative opening sequence from one of his earliest projects, Zulu, plus several notable pieces from the US ABC-TV 1963 documentary special Elizabeth Taylor In London. OUR final track, Christine, released in 1963 by 'Miss X' (actually Joyce Blair) was a topical parody based on the Profumo affair. Later, Barry would pick up Academy Awards for Born Free (1966), The Lion In Winter (1968), Out Of Africa (1985) and Kevin Costner's Dances With Wolves (1991), but our 16-track selection highlights those early-mid Sixties pieces that first propelled Barry's music to a worldwide audience.

Pass the popcorn and enjoy!

What  makes a television series memorable? Characters, actors and catch-phrases all play their part, but when it comes to summoning up the atmosphere of a dimly-recalled drama or classic comedy there's no better memory-jogger than its theme music.
Composing those themes is no easy task. Not only has the music to fit the programme's style and content, but it also has to be memorable in itself. Our selection of 18 top tunes from the 1960s fills that bill, as evidenced by the fact that four have been hit singles in their own right. The Barry Gray Orchestra has had two bites at the cherry with Thunderbirds and Captain Scarlet, both marionette series from the Gerry Anderson stable. The theme from Top Secret, `Sucu Sucu', made it to Number 9 in 1961 in the hands of Laurie Johnson and was the most successful of five competing versions from different artists, while Johnny Keating's Z Cars went one place better the following year. It's still played every other Saturday at Goodison Park when Everton FC take the field, a tribute to its longevity. Adventure series The Avengers and The Saint have both been updated Hollywood-style in recent years, but the one thing no-one could improve on was their theme tunes. Enjoy them, and 16 more 1960s small screen highlights, here.