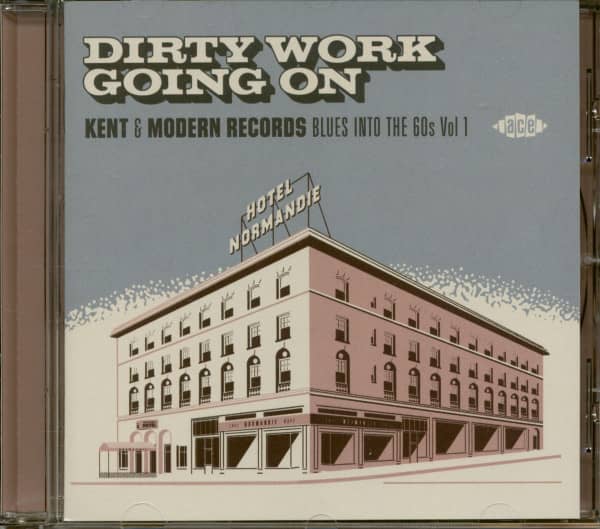 (Ace) 26 tracks
The blues didn’t stop with the end of the 50s – as soul ruled the charts, the grittier end of black music was well represented by the artists on this compilation. Great guitar playing to the fore.

20 years after the release in Japan of P-Vine’s limited-edition “Modern/Kent Blues Treasures” CD series, the anniversary isn’t going to spark a lot of commemorations, but it does make a renewed appreciation for these obscure 1950s and 1960s West Coast blues from the vaults of the Bihari Brothers’ labels a little extra timely. Accordingly, Ace has compiled two CDs from the Bihari archives, based strongly on the four-volume P-Vine series but with a few additions (and obviously a couple of CDs’ worth of omissions).

This first volume, “Dirty Work Going On”, reflects the West Coast band blues of its time. The blues side of the company’s output was largely a blend of the pacesetting B.B. King , rhythm & blues, funk and social consciousness in the lyrics as the civil rights movement brought change and turbulence. Volume 2, “If I Have To Wreck LA”, to follow later this year, will retain the Texas blues base but focus more on gutbucket, downhome blues, which means harmonica will replace horns and the shadows of Lightnin’ Hopkins and John Lee Williamson will loom large.

Together, these two collections evoke a time and place that feel increasingly remote. Most of these sides never made it to vinyl, and stayed largely or completely unheard for over 60 years in some cases, other than the small-run Japanese CD releases. We have included several versions minus their subsequent overdubs, or probably awaiting some that never happened, and alternate takes. When this music was created it was during a time of change, for the blues and for society, and the music and sociopolitical perspectives heard here are well worth a look back.