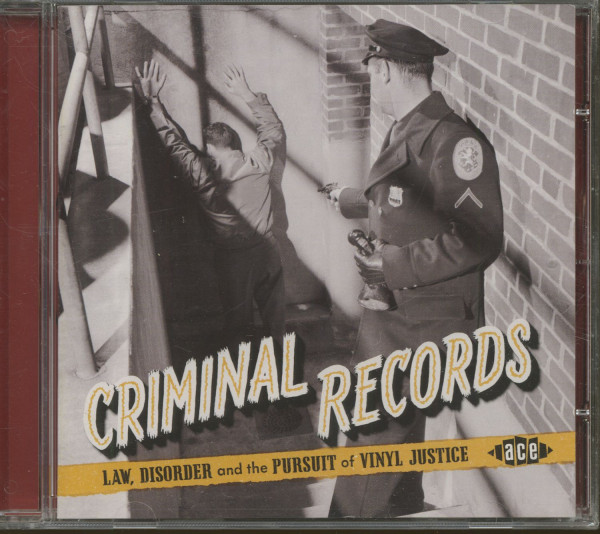 Crime and punishment have always gone hand in hand in the worlds of rock’n’roll, R&B and country and western music. For decades, goodies and baddies have provided us with a life sentence of chronicling of man’s misdemeanours and subsequent incarceration. When top Ace fan Tony Watson suggested that a compilation of songs about obeying and breaking the law would be right up the street of most of those who buy our CDs, we didn’t need to be read our reissue rights to agree. With that in mind, your honours, I hereby present the case for “Criminal Records”

Our line-up of heroes and villains runs the whole gamut of lawbreaking and law enforcement. Within its 60 minute audio sentence (and no time off for good behaviour) we cheer western heroes such as Gunsmoke’s “Mister” Matt Dillon and boo villains such as the fictitious (and let’s be very glad he is) ‘Bad Dan McGoon’. Our helmets are doffed to radio and TV ’tecs of the calibre of Dragnet’s Sgt Joe Friday and the legendary iron-jawed Dick Tracy, as well as some of those smoother newer fellas that came later such as 77 Sunset Strips Stu Bailey and, from the TV show of the same name, Peter Gunn. Bob Luman tells us how much he wishes he was a ‘Private Eye’ which a pre-twistin’ Chubby Checker moans that he can’t get any girl reaction, because his lady love is too busy drooling over the kind of ruggedly handsome television PIs that Luman aspires to be.

Other legendary enforcers of the TV screen from the years between Friday and Bailey are also on your case and on your trail, from Alaska (Sgt Preston Of the Yukon) to Chinatown (Charlie Chan, in the Coasters’ ‘Bad Detective’). If you grew up watching the small screen when it really was a small screen, you’ll remember most of these upstanding lawmen and their relentless pursuit of justice at all costs as they came into your homes on a weekly basis.

Less savoury characters that we hear from include alimony dodgers Richard Berry and Wynonie Harris; hardened lifers Jumpin’ Gene Simmons, George Jones and Hylo Brown; denizens of DWI Benjamin “Scat Man” Crothers and, with some help from Cliff “King” Solomon’s orchestra, Gigi Gryce; chain gang toiler Billy Boy Arnold and the perpetually in-the-wrong-place-at-the-wrong time Bobby Nunn of the Robins. And lest anyone think we’ve gone soft on lady lawbreakers, vivacious Vicki Young puts a Prisoner Of Cell Block H perspective on what it’s like to ‘Riot In Cell Block #9’. Personally I reckon that at least some of these guys and gals ought to have been let off with a caution.

Failure to support this project will result in a visit from the no-fun police and a lifetime of listening to R and B (that’s Rihanna and Bieber) for your sins. It’s a fair cop, guv, but society is to blame.