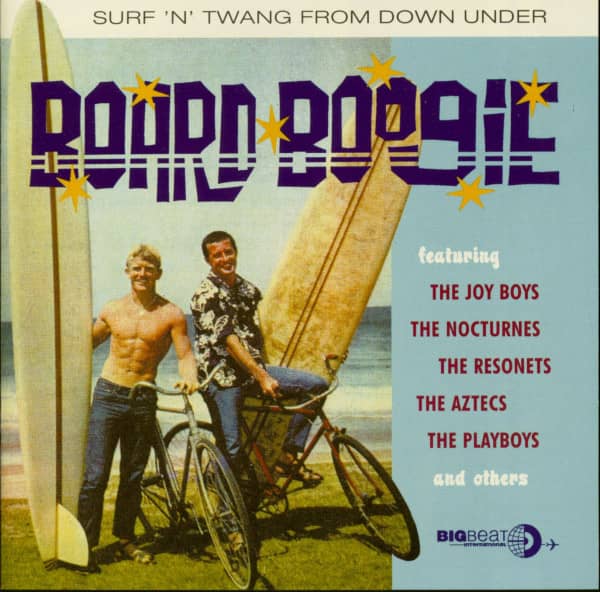 Various: Board Boogie - Surf'n'Twang From Down Under (CD)

(ACE Records) 30 tracks 1963-65 with 12 page booklet.
-
The instrumental boom of the early 1960s gripped Australia as fiercely as any nation. While it was principally allied to the surf culture that is an intrinsic part of coastal life downunder, the Aussie scene was as varied as anywhere else. But rather than meekly imitate the Yanks (and Poms), local musicians took the instrumental form one step further, pushing the boundaries of fretboard excess to a level matched only by the Japanese in those years.

Australian youth surfed and stomped to a soundtrack of frenetically twanged, strummed and reverberating Stratocasters, underpinned by rolling drums and a frequently urgent atmosphere. It is a piercing, diamond-hard sound, personified by local heroes the Atlantics and their 1963 worldwide surf hit Bombora. There are other textures too - a touch of country, a lugubrious, quasi-Polynesian lilt - but the end result has a consistent and uniquely Australian flavour.

Article properties: Various: Board Boogie - Surf'n'Twang From Down Under (CD)