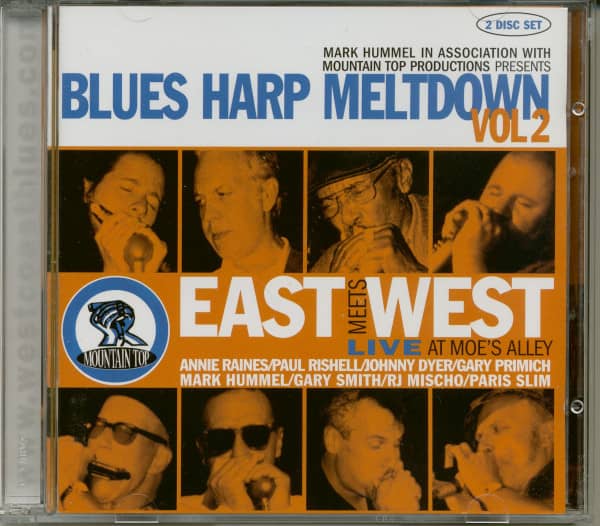 P Secure bonuspoints now
Description
Learn more about Various
Review 0
Description
the first release in this series was received very well by harmonica fans, the world over. So it... more
Close menu

the first release in this series was received very well by harmonica fans, the world over. So it was almost natural to continue the story with this volume. Mark Hummel as the artistic director of the blues harmonica battles once again presents a hand-picked list of great players and blowers. The event was called 'East Meets West'. Mark's band, the Blues Survivors, did a great job backing all these soloists. Johnny Dyer's set pays tribute to the great harpplayers that shaped postwar electric blues. He loves to play Little Walter style. Frank Goldwasser is always good for a surprise. He's not one of the finest but yet underrated guitar players on the west coast. He's also a talented harmonica player. Listen to his version of an old Junior Parker tune. Great to hear Gary Primich 'live'. Man, he sure can play! And not to forget Annie Raines, the world's greatest female harmonica player! Incredible. All in all, this 2-CD set takes you back to Moe's Alley, into a hot summer night. Highly recommended, and not not for harp fans, only!FRANK GOLDWASSER - gtr, PAUL RISHELL - gtr, JUNE CORE - drums & THE BLUES SURVIVORS: CHARLES WHEAL - gtr, STEVE WOLF - bass, MARTY DODOSON - drums.