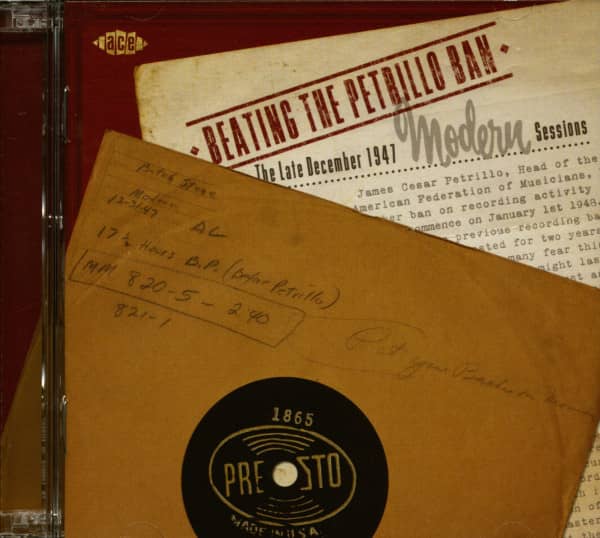 (Ace Records) 49 tracks
While the majority of Americans were decking the halls with holly in December 1947, the recording industry was working flat-out to commit as much music as possible to acetate, before midnight on New Year’s Day 1948 ushered in the second American Federation of Musicians recording ban – like the previous one, instigated by AFM head honcho James Cesar Petrillo in response to the notion that musicians were being put out of work by the popularity of jukeboxes in venues where they had previously plied their trade.

The first recording ban in 1942 had caught everyone by surprise and lasted for 2½ years – during which time no recordings were made utilising union musicians. Nobody wanted to be short on releasable masters if the second ban were to continue as long. Record companyies cut their artists on as many sessions as they could cram in. Modern Records was no exception, as you will discover on this special 2CD collection of recordings made in the two weeks leading up to the start of the ban.

Modern’s Jules Bihari recorded every active artist on the label’s roster during the period this CD covers – sometimes more than once. The artists ranged from the Inkspots-styled Ebonaires to torrid gospel vocalist Sister Ira Mae Littlejohn, via Modern favourites Hadda Brooks and Gene Phillips and newer ones such as Jimmy Witherspoon and Butch Stone.

One version of each song recorded at every session from 19 December to New Years Eve is included in this prestigious collection – all freshly remastered from new transfers of the original Modern acetates. Wherever possible, the songs are featured in unissued different versions from those previously available.

The copious notes are set out in session order, allowing the listener to follow the recording events as they took place. Wherever possible, existing session chat has been retained to put us in the studio with the musicians.

The second ban lasted less than a year. As a result, many of the stockpiled masters did not gain release until long after their recording date – and there are a considerable number of songs here that have never been released at all prior to this CD. This deluxe 2CD set enhances the already high reputation of post-WWII West Coast R&B to a significant degree, with the music sounding as vibrant now as it did almost 65 years ago. More than that, it shows that Ace’s A&R policy is to keep faith with this side of our catalogue whenever the opportunity presents itself.