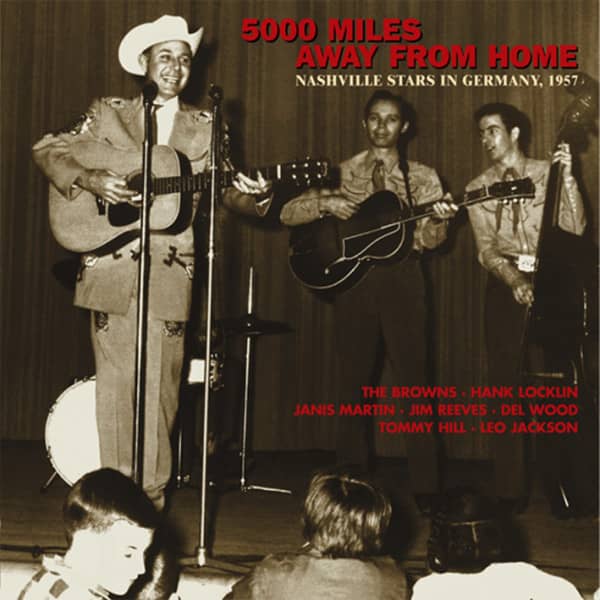 1-CD with 28-page booklet, 9 tracks Playing time 24:19 mns.
At the height of the Cold War, there were hundreds of thousands of American troops stationed overseas, many of them in Germany. The USO arranged tours to boost the morale of troops stationed far from home, and in 1957 it contracted with RCA for almost the entire Nashville roster to go on a tour of Germany. The troupe included the Browns, Hank Locklin, Janis Martin, Jim Reeves, and Del Wood. The AFN taped one of the performances, and the result is a fascinating document. We hear Jim Reeves singing Courtin' In The Rain, a song he was not otherwise known to have recorded, as well as Have I Told You Lately That I Love You.
We also hear the Browns sing It Takes A Long Red Train With A Red Caboose, Hank Locklin reprise It Takes A Good Woman's Love, and Tommy Hill sings (what else?) Fraulein. Janis Martin does a storming version of I'm Walkin'. Add a few instrumentals and it becomes a fascinating little time capsule. Travel was far more difficult in those days, and there was the ever-present threat of War. Against that background, we hear a group of country singers five thousand miles from home entertaining their fellow countrymen, and helping to bring country music to Europe.