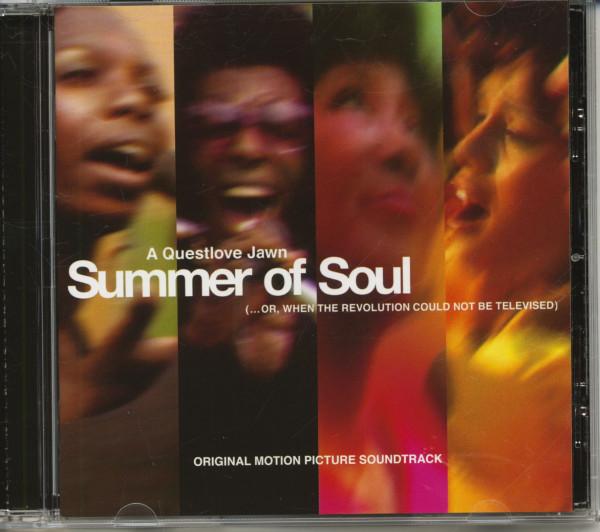 (Sony) 16 tracks, original moviesoundtrack: Summer OF Soul ( (...Or, When The Revolution Could Not Be Televised).

Like the documentary, most of the sound recordings made during the 1969 Harlem Cultural Festival have not been heard in over 50 years, making this incredible event lost in America's history - until now. The Summer of Soul (...Or, When The Revolution Could Not Be Televised) Original Motion Picture Soundtrack is a joyous musical celebration and rediscovery of a nearly erased historical event that celebrated black culture, pride and unity.
For the album, Questlove carefully selected 17 live interpretations of jazz, blues, R&B, Latin and soul classics performed as part of the 1969 Harlem Cultural Festival, as described in the film. Previewing the soundtrack today is Sly & The Family Stone's performance of "Sing A Simple Song."
Beyond that, the soundtrack features everything from B.B. King 's poignant and powerful guitar-driven gem Why I Sing The Blues to the rapturous Precious Lord Take My Hand by The Operation Breadbasket Orchestra & Choir featuring Mahalia Jackson and Mavis Staples. Not to mention Gladys Knight & The Pips, who are at their best with I Heard It Through The Grapevine, while Nina Simone's voice is made to glow on Backlash Blues and Are You Ready.