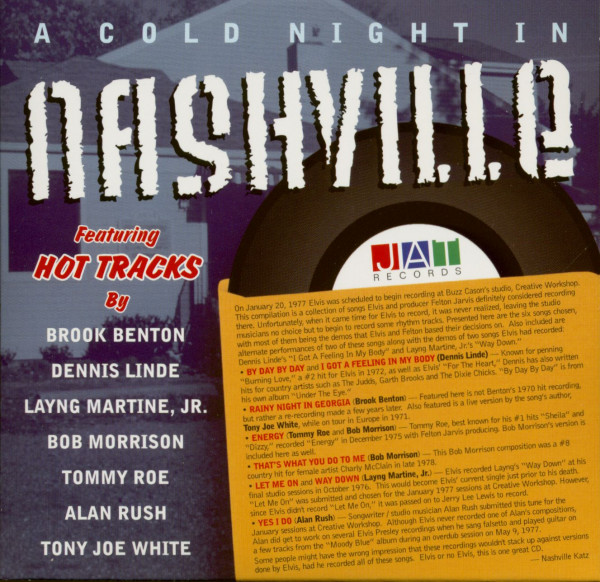 (2004/JAT) 10 tracks (29:51) papersleeve.
-
On January 20, 1977 Elvis was scheduled to begin recording at Buzz Cason's studio, Creative Workshop. This compilation is a collection of songs Elvis and producer Felton Jarvis definitely considered recording there. Unfortunately, when it came time for Elvis to record, it was never realized, leaving the studio musicians no choice but to begin to record some rhythm tracks. Presented here are the six songs chosen, with most of them being the demos that Elvis and Felton based their decisions on. Also included are alternate performances of two of these songs along with the demos of two songs Elvis had recorded: Dennis Linde's "I Got A Feeling In My Body" and Layng Martine, Jr.'s "Way Down."
-
• BY DAY BY DAY and I GOT A FEELING IN MY BODY (Dennis Linde)* Known for penning "Burning Love," a #2 hit for Elvis in 1972, as well as Elvis' "For The Heart," Dennis has also written hits for country artists such as The Judds, Garth Brooks and The Dixie Chicks. "By Day By Day" is from his own album "Under The Eye."
• RAINY NIGHT IN GEORGIA (Brook Benton) - Featured here is not Benton's 1970 hit recording, but rather a re-recording made a few years later. Also featured is a live version by the song's author, Tony Joe White, while on tour in Europe in 1971.
• ENERGY (Tommy Roe and Bob Morrison) -- Tommy Roe, best known for his #1 hits "Sheila" and "Dizzy," recorded "Energy" in December 1975 with Felton Jarvis producing. Bob Morrison's version is included here as well.
• THAT'S WHAT YOU DO TO ME (Bob Morrison) - This Bob Morrison composition was a #8 country hit for female artist Charly McClain in late 1978.
• LET ME ON and WAY DOWN (Layng Martine, Jr.) - Elvis recorded Layng's "Way Down" at his final studio sessions in October 1976. This would become Elvis' current single just prior to his death. "Let Me On" was submitted and chosen for the January 1977 sessions at Creative Workshop. However, since Elvis didn't record "Let Me On," it was passed on to Jerry Lee Lewis to record.
• YES I DO (Alan Rush) - Songwriter / studio musician Alan Rush submitted this tune for the January sessions at Creative Workshop. Although Elvis never recorded one of Alan's compositions, Alan did get to work on several Elvis Presley recordings when he sang falsetto and played guitar on a few tracks from the "Moody Blue" album during an overdub session on May 9, 1977. Some people might have the wrong impression that these recordings wouldn't stack up against versions done by Elvis, had he recorded all of these songs. Elvis or no Elvis, this is one great CD. — Nashville Katz