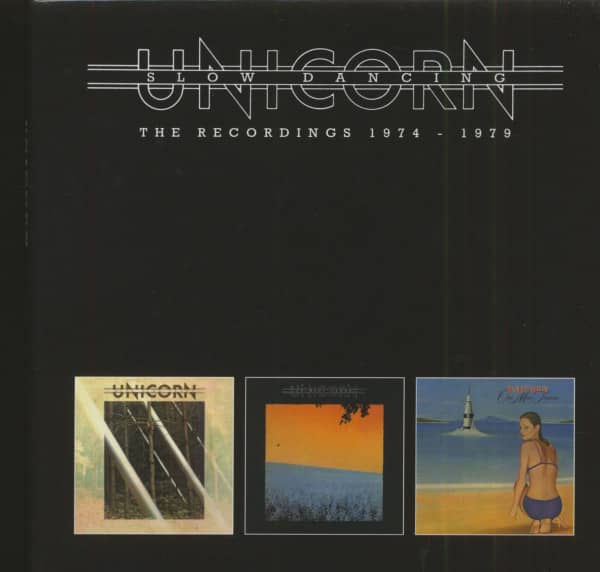 Unicorn recorded their first album in 1971 for the Transatlantic label, but by 1973 they began an association with DAVID GILMOUR of PINK FLOYD who was taken with the band’s musical approach and American West Coast musical influences, vocal harmonies and very English lyrics. Gilmour was to produce their next album, BLUE PINE TREES. Featuring a line-up of Kenny Baker (guitar, keyboards, vocals), Pete Perryer (Drums, lead vocals) Pat Martin (bass, vocals) and Kevin Smith (lead guitar, mandolin) , “Blue Pine Trees” was released on the Charisma label in 1974 and was produced by David Gilmour, who also featured on Pedal Steel Guitar and guitar on several tracks. In 1976 the band signed with EMI’s Harvest label and recorded their next album TOO MANY CROOKS. David Gilmour produced the album once again and also featured as a musician on several tracks. The album included the song NO WAY OUT OF HERE which Gilmour would cover on his first solo album in 1978. ONE MORE TOMORROW, was the band’s final album and was released in 1977.
Although Unicorn would continue until 1979, the band didn’t record another new album.

“SLOW DANCING – THE RECORDINGS 1974 – 1979” gathers together the albums BLUE PINE TREES, TOO MANY CROOKS & ONE MORE TOMORROW, all with additional bonus tracks and features an additional CD with 19 previously unreleased studio and live archive recordings, selected by Unicorn’s Pat Martin. The set also features an illustrated booklet and essay and is a fine tribute to one of Britain’s most unique bands.