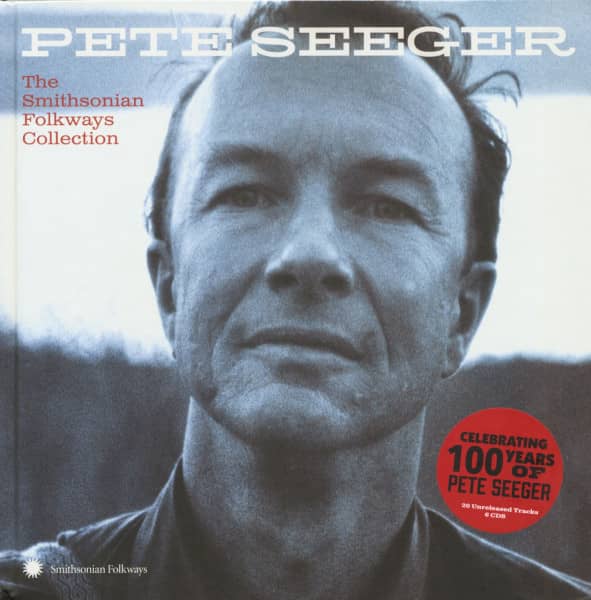 The Smithsonian Folkways Collection is a cross-career anthology of one of America's most famous, influential and exemplary musicians.

This set includes classic recordings, 20 previously unreleased tracks, historical live performances and special collaborations. Pete Seeger's Folkways catalogue covers more than 60 years, which are now summarised in a comprehensive and unique book on the occasion of his 100th birthday.

This collection is in a 200-page, large-format and qualitatively elaborate book with countless essays, commentaries, photographs, history and notes as well as 6 CDs with well-known and unpublished music, which was created during Seeger's entire career.

Pete Seeger never abandoned the original vision of the Almanac Singers. With the war over and now back in civilian life, he dreamed of expanding the Almanacs' ideals into a national movement that would unify singers, performers, choral leaders and labor unions into a force for political and social change. Seeger's model was Great Britain's Workers Music Association, founded in 1939 by members of England's Communist Party.

Within a year's time the People's Songs concept spread to other major North American cities. In October 1947, the organization held its first national convention in Chicago. The organization set up a booking office for its members and encouraged aspiring singer-songwriters and established composers to send sheet music or demos of new topical songs for possible publication in the monthly bulletin.

Although some professional composers were among People's Songs' earliest supporters, the most enduring songs to emerge from the movement were penned by non-professionals like Vern Partlow, a Los Angeles journalist and union activist.

Born May 25, 1910, in Bloomington, Illinois, Verneil Partlow moved to California after working for newspapers and radio stations in Wisconsin and Chicago. Hired by the Los Angeles Daily News, he became an early supporter of the American Newspaper Guild, formed in 1933. In the mid-'40s forties he hosted a program covering labor issues for a Los Angeles station.

When Earl Robinson opened the first People's Songs office on the West Coast, Partlow became one of its earliest members. After interviewing scientists on the consequences of a nuclear war, he wrote Old Man Atom, a talking blues using a musical template Woody Guthrie adapted from the recordings of Chris Bouchillon. Laced with irony, the song circulated among other singer-songwriters after its appearance as Atomic Talking Blues in the January 1947 People's Songs Bulletin. Pete Seeger recorded it in 1948 for Irwin Silber and Brownie McGhee's Encore label.

Outside of activists within People's Songs, few people bought Seeger's record. One who did was Sam Hinton, curator of the Thomas Wayland Vaughan Aquarium Museum at Scripps Institution of Oceanography at the University of California at San Diego.