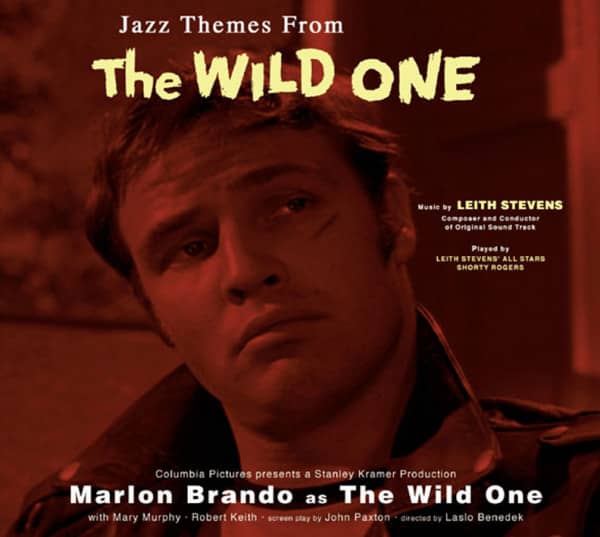 Various - Soundtracks: The Wild One (CD)

It was perhaps the most famous movie of the Fifties. It said so much about the Fifties teenage rebellion...and said it first. The soundtrack predated rock 'n' roll, featuring instead four numbers by noted jazz trumpeter Shorty Rogers and a fabulously atmospheric score by composer Leith Stevens. The four Shorty Rogers numbers were issued on a long-deleted RCA EP, and Leith Stevens recorded 8 songs for a double EP on Decca a few weeks later (all of them featuring Shorty Rogers). In 1956, Leith Stevens recorded another four pieces inspired by the movie to round out a 12" album.
Now the three elements come together for the first time! They work as a souvenir of one of the greatest movies of all time, but, more than that, they work as tight, swinging west coast jazz circa '53. Here is some great scoring, and here are some of the most innovative musicians on the west coast, including Jimmy Giuffre, Bud Shank, Russ Freeman, Bill Holman, and Shelly Manne.

The movie begins with a group of 40 leather-jacketed bikers, calling themselves The Black Rebels, roaring down a lonely country road in Northern California. They first invade a legitimate motorcycle race, where they try to join the competition, but are soon rebuffed and forced to leave. As they are leaving, one of the gang members steals the first prize trophy which he gives to their leader Johnny. With the trophy strapped to his handlebars, Johnny leads the pack of rowdies into the small town of Wrightsville. Within minutes they create a great disturbance, racing up and down the streets, forcing one local driver to crash into a light pole, and making themselves generally obnoxious.
Many of the bikers pile into Bleeker's Café, owned and operated by Harry Bleeker, the sheriff of the town. Bleeker is obviously overwhelmed by the disturbance and the number of rowdies, so does little to calm things down as the bikers drink themselves into oblivion. Johnny placates, intimidates and otherwise bullies Bleeker into doing nothing as his minions amuse themselves terrorizing the town by wrecking cars, insulting the locals, making passes at the girls and invading the shops.
While not participating directly in the vandalism, Johnny is doing little to stop it. He spots a pretty girl on the street and follows her into the café, only to learn to his surprise that she is Bleeker's daughter Kathie. Though intrigued by the strange, somewhat withdrawn, brutish young man, Mary refuses the gift of the trophy he offers her in an attempt to impress her. Disgusted with the lack of action by her father, which she perceives as cowardice, and disdainful of Johnny's bullying manner, Kathie rebukes them both.
Soon real trouble comes thundering into town as a rival gang, led by Chino, a former member of the Black Rebels who left to form his own gang. Chino enjoys goading his former leader, but when he tries to snatch the trophy from Johnny's bike, a savage fight ensues. The townsfolk mingle with the bikers to get a good look at the brawl, but when a man tries to drive his car through the crowd, the bikers turn his car over. Realizing the bikers have now gone too far, Bleeker arrests Chino, who, bemused with the situation, allows himself to be put in jail.
When night falls, Chino's gang erupts in a frenzy of activity, intending to bust Chino out of jail. They cut the telephone lines to prevent the sheriff from calling in outside help and then go on a rampage of destruction. Realizing he has completely lost control of the situation, Johnny takes Kathie to the local park where she will be safely away from the violence. They talk for a while before Kathie, torn between her desire for him and her fear of him, runs away toward the center of town. When he catches up with her, she whirls around and slaps him, breaking free to run off. The incident was witnessed by several townspeople who assume Johnny tried to rape the girl. As Johnny is riding his motorcycle back into town, he is attacked by a vigilante mob and savagely beaten. When Kathie realizes what is happening, she begs her father to stop it. He takes a gun and orders the mob to stop. After Johnny collects himself, he prepares to leave town. As he rides off, one of the mob throws a tire iron, knocking him off the bike which then goes out of control, hitting and killing an old man.
The town's bloodlust in full boil, a lynching seems eminent when the county sheriff arrives and restores order to the town. Kathie comes to the defense of Johnny, declaring that he never attacked her. A member of the vigilante mob admits that he saw someone in the mob throw the tire iron that knocked Johnny off the motorcycle, causing the riderless bike to go out of control and hit the old man. With this information, the sheriff orders Johnny to gather all the bikers and ride out of the town, never to enter the area again. Shocked and confused over Kathie, Bleeker, the sheriff and other members of the community's kindness towards him, Johnny tries but is unable to articulate his thanks, so he simply leads the riders out of town.

for such a seminal film it is good to have this soundtrack as it shows the emerging transition of musical styles in film music to a more flexible jazz score that would appeal to young people at the time.
the score and the variations are well produced pn this record which is a good lsiten even if you do not know the film.i

Write an evaluation
Evaluations will be activated after verification.
Weitere Artikel von Various - Soundtracks
Hint!
NEW
Shorty Rogers: The Wild One - Jazz Themes From The Wild One -... Art-Nr.: LPDOST65P 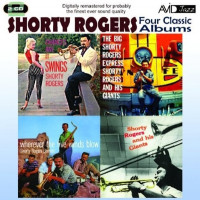