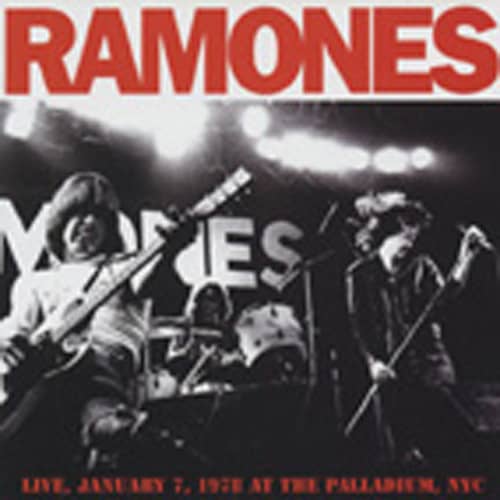 Learn more about RAMONES
The Ramones  `Precious little is known about backgrounds of the various Ramones, save... more
Close menu
"RAMONES"

`Precious little is known about backgrounds of the various Ramones, save the customarily mumbled information that original members Joey, Dee Dee, Johnny and Tommy Ramone all hail from Forest Hills, Queens, New York, and formed their one and only band in 1974 after graduafing from, or "growing out of," high school. They had been together for less than a year when they de-, buted to a virtually empty house at CBGB's, the notori-ously seedy Bowery club where a blank generation of distinctively raw rockers first gained a foothold. Ham-mering out a numbing, 17-minute set consisting of about eight 3-chord, 2-stanza songs, the Ramones were instrumental in spawning an aggressive national groundswell of back-to-basics rock bands whose defiant individualism inspired a horde of disaffected young Eng-lish snots simultaneously rallying together as the Sex Pistols, the Clash, Generation X... moor New York music writers like Danny Fields of the Soho Weekly News began devoting passionate columns to the four Forest Hills rockers. Mop-haired and sickly looking, with faces so acne-caked they resembled pink peanut  e Ramone were as appealing as their hasty repertoire of head splitters: Blitzkrieg Bop, Chain Saw, Loud-mouth, Now I Wanna Sniff Some Glue, etc.

Meanwhile, on the other side of a widening No Band's Land, the trenches were full of contemptuous mainstream rockers and their fans, not to mention radio programmers, concert promoters and even some crit-ics, all of whom denounced the Ramones as no-talent sacks of shit. Incensed that four mysterious creeps with the same last name (the Ramone Brothers?) had come out of nowhere to release one remedial record (Ra-manes, 1976) and subsequently generate as much press as the last Rolling Stones tour, the tradition-bound op-position demanded an explanation: Where do these, punks get off?   Four years and four albums later, Joey Ramone's father is still pondering the same question. "The music used to drive me up a wall," wearily admits a bemused Noel Hyman, chatting in the office of his Manhattan trucking company. "I tried to get him interested in some good t. music — his grandmother, Fanny, used to sing for Macy's; you rented a piano from the store for a party  and she came with it — so I got him an accordion when he was a child. He loved the goddamn thing, but he squeezed it until there was nothing left of it — I think he loved to hear the wheezy noise it made. As a teenager he was fairly good at the drums, playing em in the base-ment with his friends, but it got so I really had a hard time standing the racket.

I gotta be honest with you — I was surprised, very much so, when Jeffrey [a.k.a. Joey] and the band started putting out records and getting a little popular. I was always hearing him say, 'We got something here,' until it rang in my ears. And I didn't believe in it at all. I would have liked him to come into the business, really. The first coupla times I saw the group play, I must say I didn't like em, but I got used to it — although it took some time. But then, I guess the first time some people taste champagne they wanna spit it out, right? Still, I think they oughta put more different things in their music, 'n' complicate it up a bit, if they wanna get high up on the whattayacallit — the lists, the charts? I dunno, I'm an old square. Guess it looks like he may do okay after all, right?"  "I'm sick of not selling records," Joey mutters to himself as he peers into the mirror in his cramped upstairs dressing room at Philadelphia's Walnut Street Theatre. "I want to draw more people to the shows, make some-thing happen. If the new album isn't a hit, I'm gonna kill myself." Recently returned from a well-attended tour of Europe, the Ramones are back on the road to promote their latest LP, Road To Ruin. The album has been almost universally praised as the band's most ambitious and engaging effort to date, demonstrating as it does an im-pressive growth in musicianship and an expanded com-positional flair.

Dee Dee has blossomed into a deft, distinctive bassist; Johnny's brisk, chunky riffing has given way to some canny, if restrained, leads; new drum-mer Marky (a replacement for Tommy, who bowed out last year) provides a solid bottom and a powerful for- ward thrust; and Joey has evolved — with the help of voice lessons — into a rather spry, inventive vocalist. None of these developments has lifted the band anywhere near the Top Fifty or the lofty status of an arena-filling attrac-tion, however, so the Ramones have dragged their equip-ment out to Philly by van to headline a modest program on the site of the historic first presidential debate be-tween Gerald R. Ford and Georgia Governor Jimmy Carter.  Snapped out of his dressing-room doldrums by a pat on the back from baby-faced Johnny Ramone (alias John Cummings), the spindly, knock-kneed Joey is summoned into a back room for an impromptu pre-concert confer-ence. Timing and pacing are discussed, the meeting chaired by the authoritative Johnny, who clearly is the de facto perfectionist of the group. He's also the most business-minded of the four, momentarily putting their huddle on hold at the appearance of sandy-haired man-ager Danny Fields, the Ramone's longtime booster. Johnny registers a stern complaint with the straight-faced Fields about the absence of posters in the the-ater's outside display cases and requests some information on current airplay and record sales in sec-ondary markets, before returning to his cohorts to drill them on the evening's songs.

His presence not required for the run-through, Joey has slipped into the dressing room and is bent over the dirty sink, rinsing his purple eyeglasses under the faucet. He remains locked in this position for an extended period, oblivious to the ebb and flow of awed fans and curious members of the other groups on the bill.  Ten minutes later, diminutive Linda Stein, 32-year-old wife of Seymour Stein (president of the Warner Bros.-distributed Sire label) and the other half of the band's managerial ream, strides in, and Joey lifts his head and whispers to her urgently. She nods and then issues a booming command to all assembled: "Excuse me every- body! Please clear the room! Joey wants to be alone to  wash his face!" As the throng moves toward the door,  Joey's furtive eyes meet mine — a rare moment — and  his face erupts in a crimson blush that temporarily ob- scures the swollen zit nestled against his pug nose. But  the awkward instant is suddenly dispelled by the ap- pearance of a bold devotee who bursts through the  stream of departing fans and starts jabbering into Joey's  ear. "I really loved California Sun, man, I really really  did!" he gushes. "Could you write an autograph for my  friend?" Joey nods shyly and dries his hands on his  grimy, sweat-soaked shirt. "Say, 'To Ian, from Joey Ra- mone', the fan insists as the skinny star begins scrib- bling on a scrap of paper. "And, er, could you please  print it, cause he only understands printing..."  You read it everywhere and hear it at parties whenever  someone dares to play one of their records. Throughout  the recording industry their enemies are legion, many  dismissing the four as hopeless mooks.

Joey Ramone in  particular has frequently been singled out as a Grade A  Fancy ninny whose motor responses supposedly were so  atrophied by adolescent glue sniffing that now he can't  even find his ass with both hands. Those allegations  seem to take on a certain gravity when Joey's viewed in  concert. During the show at the Walnut Street Theatre,  he clutches his ripped mike stand with abject despera- tion, weaving around the unsteady axis like a drunk  looking for the keyhole. As always, his deathly pale vis- age is almost entirely hidden by a curtain of matted hair,  and his bird legs are locked with spastic rigidity as his  jeans droop past his hipless waist.  The set has opened with Dee Dee roaring his ritual "One,  two, three, four!" countdown to kick off the Ramones'  biggest (66 in Billboard) chart single ever, Rockaway  Beach, as their large red, white and blue eagle banner  is lowered behind the drums. Following in quick suc-cession are astringent treatments of Blitzkrieg Bop, I  Don't Want You, Gimme Gimme Shock Treatment, Don't  Come Close and Sheena Is a Punk Rocker. By this time,  the packed house — a surprisingly diverse mix that in- cludes the safety-pin-through-the-nose crowd but also a  host of Ivy Leaguers and even some middle-aged long-hairs in down parkas — is in a flat-out frenzy, thrusting  their fists in the air as Joey leads them in between-songs  chants of "Hey! Ho! Let's go!" Needles & Pins, the lat- est single, lifts the proceedings to a fever pitch, and a  wildly flailing Marky purses his lips as if he's going to  puke from the exertion.

Combining the stunning attack of the early Kinks with  the energy, flamboyance and spectacular pacing of the  Who, the Ramones give of themselves with a kooky to- tality that is strangely moving. Witnessing the event,  even one who is not really an avid fan has to wonder  whether the Ramones' harshest detractors have ever  seen them in live performance. Thematically, songs  about decapitation, teenage lobotomies, headbangers  named Suzy, sniffing Carbona spot remover and wanting  to be sedated may be an acquired taste, but it's difficult  to understand why more hard-rock enthusiasts — espe- cially the heavy-metal helots — cannot find a place in  their hearts for the Ramones' explosive sound. No con- certs so well executed as their own could come off with- out some lucid thought being paid to musical craft and  presentation, and it's a genuinely triumphant moment  when a roadie rushes out at the climax of the Philly date  to hand Joey a black and yellow banner emblazoned with  the exhortation: Gabba Gabba Hey!'  — Rolling Stone, February 8th 1979 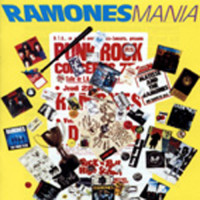 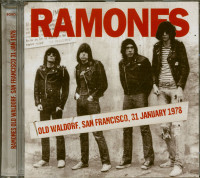