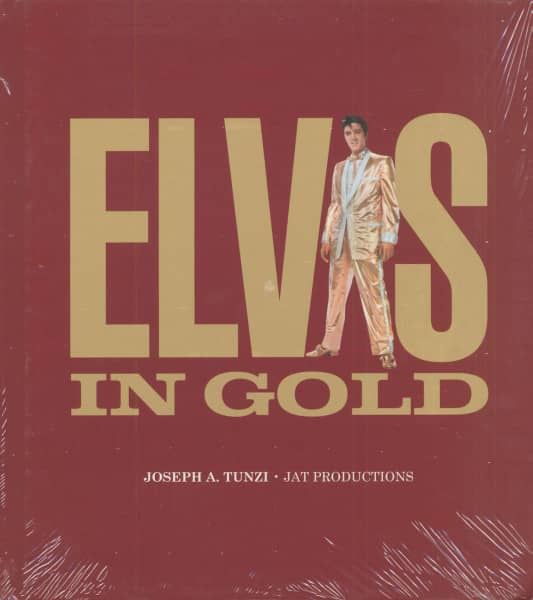 "...In early 1957, Colonel Tom Parker commissioned Hollywood tailor Nudie Cohen to design something flashy for Elvis’ upcoming tours and publicity photos. Nudie Rodeo Tailors specialized in outfitting apparel for country music singers as well as stars of westerns. Parker's previous background in managing country artists may have played a role in his decision to hire Cohen, and indeed they were personal friends. Cohen took Presley’s measurements during the filming of Loving You, finishing his work by the time the shoot was completed in March.

Posing in what was to be his most widely seen photo session, Elvis wore matching gold pants, jacket, belt, and shoes, along with a golden string tie and a ruf?ed white shirt. The 50,000,000 Elvis Fans Can’t Be Wrong - Elvis’ Gold Records Volume 2 LP remains the most celebrated use of these images. Whether
it’s because of the unique layout that uses a single photo sixteen times, or simply the fact that Elvis looked stunning, it was the ultimate rock and roll album jacket.

In light of how famous the LP has become, it’s generally been overlooked that the first record to actually use a gold suit photo was the EP A Touch Of Gold. Part of RCA’s Gold Standard series, it, and the two subsequent volumes to follow, served as a somewhat random counterpart to the Gold (en) Records LPs. The first EP simply used a singular image of the photo that would be employed on Gold Records 2. The third volume had the same photo in triplicate, but it's the second volume that is the most interesting. It uses two more brooding shots from the session against a striking black background. The back cover had a preview for 50,000,000 Elvis Fans also using a black as opposed to a white background. Despite rumors to the contrary, it’s certain that the LP was never going to be pressed with the variation. RCA often used slightly alternate art in their advertising right from his 1956 debut on through to Elvis’ very last LP, Moody Blue.
RCA continued to use the gold suit images well into the sixties, most notably in a 1963 advertisement for the Gold (en) Records series. Incongruously this was featured in a limited edition photo booklet that record stores gave away to the initial purchasers of Elvis’ Golden Records, Volume 3."

(January 8, 1935, Tupelo, MS – August 16, 1977, Memphis, TN)
Elvis Presley (full name Elvis Aaron Presley) is the most outstanding personality in showbiz ever since, and the most popular entertainer the world has ever seen! His musical influence within music history and its following generations of musicians is still unbroken. His huge 'Blast-Off' in the mid-1950s, the rising star from a simply called 'Hillbilly Cat' (at Sun Records) to a lascivious Rock'n'Roll singer with charisma, a male sex symbol (then at RCA Victor) soon popularized him as "The King of Rock'n'Roll" or simply "The King".
His first cut within his tremendous career happened between October 1958 and March 1960 while Elvis was on duty with the U.S. Army and stationed in Germany. It was there in 1959 when he met his later wife Priscilla Beaulieu at age 14. Elvis and Priscilla married on May 1, 1967 in Las Vegas (divorce in 1973). Elvis evolved into an all-around entertainer after his Army service and started starring in Hollywood films. 33 movies in total, including the two concert documentaries 'That's The Way It Is' and 'On Tour'. He again shook the world with his 1968 NBC Comeback TV Special after his movie period without any stage appearances.
This TV special included the first ever unplugged session presented together with musicians from the early days such as Scotty Moore and D.J. Fontana. 1973 saw THE TV mega event at all: Elvis Presley, 'Aloha From Hawaii via Satellite'! Elvis' Honolulu appearance, the first time that a show was broadcasted worldwide via satellite! He was ahead of his time! Elvis Presley had 148 US single chart hits, including some so-called double-sider when A- and B-side both hit the charts like his 1956 smash 'Don't Be Cruel b/w Hound Dog', plus 15 EP hits between 1956 and 1977. Two billion of sold media and sound carriers by Elvis Presley is the estimated number! He received 14 Grammy nominations until 1978 and three Grammy for his Gospel interpretations. Elvis was the youngest artist when honored with the Bing Crosby Award (Lifetime Achivement Award) in 1971.
He is presented in 5 Halls of Fame (Rock'n'Roll, Rockabilly, Country, Blues and Gospel). Six of his song interpretations are collected in the Grammy Hall of Fame. On top of it all Elvis Presley got the most gold and platinum records and a Diamond-Award. He definetly is the 'Best selling solo artist in U.S. History' (RIAA – Record Industry Association of America)! Elvis Presley CD albums, vinyl records as LPs or singles at 45rpm - Bear Family offers a huge number of various Elvis Presley CDs, vinyl-LPs and 45rpm singles, vinyl- and CD box sets, books and mags, DVDs, unique and extraordinairy memorabilia! Let's say it in the words of one of Elvis sixties album title: There is "Something For Everybody"! And hey, you name it! Elvis Presley is the King of Rock'n'Roll, the biggest icon in showbusiness, and a great person who lives on forever!
Bear Family Records treats his legacy with the most respect and an optimum capacity of expert knowledge.
Review 0
Read, write and discuss reviews... more
Close menu
Customer evaluation for "Elvis In Gold - Joseph A.Tunzi"
Write an evaluation
Evaluations will be activated after verification.
Weitere Artikel von Elvis Presley
Elvis Presley: Elvis Ten Years After by Anne E Nixon (Hardback) Art-Nr.: 0016051