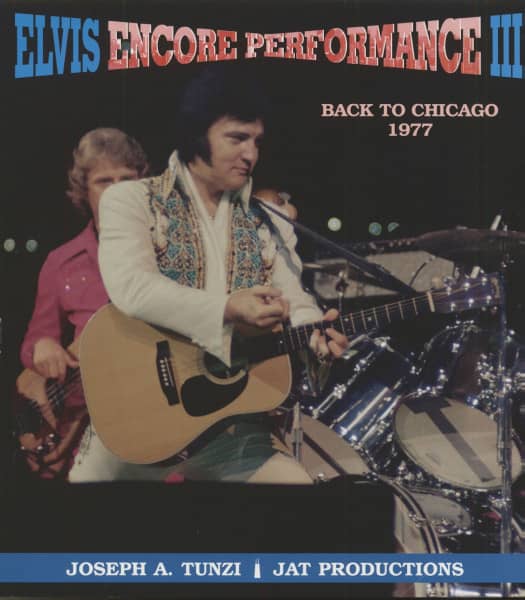 (1999/JAT) Paperback, 26x23x1cm, 112 pages, over 100 previously unpublished photos, Elvis on stage in Chicago on May 1st 1977 plus through the years section with rare backstage and candid shots.

Foreword
JAT Publications has produced many photo journals on Elvis with the introductions being written by either a musician or someone associated with Elvis. I am neither. l have never produced an Elvis record, wrote a song for him, nor have I been the recipient of a Cadillac, but I do represent a part of Elvis legacy that he had a true affection for - the loyal fan. I, like the millions of you who buy books like Joe's, anxiously await the latest CD release, browse through bookstores for any new Elvis book, will tune in to an Elvis movie or concert whenever one is shown on TV, know the lyrics to most of Elvis' songs, listen to the oldies station for Elvis songs we have probably heard a thousand times, can hear the slightest chord changes or inflections in Elvis' voice on an alternate take, can look at a thousand pictures and find the one that has never been seen before, and when at Graceland, will turn off the tape recorder, take the tour at leisure, and wonder what Elvis would be recording in 1999 and who he would be recording with.

For over twenty years, Elvis played many of our hometowns, leaving those who lived there with very special memories. It just so happens that Chicago has been the recipient of some of those memories left by an Elvis concert. What follows are my memories, in a sort of historical way, paralleling the life of Elvis as he recorded, passed through, and found lifelong friends in the city of Chicago.

I would first like to thank Joe for giving me the honor and privilege of writing this foreword and conclusion for a musical legend who not only left an indelible mark in the history of recorded music, but who left his own distinct mark on the Chicago area and on its concert stage.

During the many years of Elvis Presley's illustrious career, he traveled over hundreds of thousands of miles both in the United States and abroad. Cities and countries such as Las Vegas, Germany, Nashville, Memphis, and Hawaii are just some of the places that have become synonymous with the Legend of Elvis Presley. This city of "Big Shoulders," Chicago, is a city that could be added and stand very comfortably in this list, having become synonymous with Elvis not only because of the major events in Elvis' life that have happened in "Chi-Town," but also because of the significant associates in Elvis' life who have called Chicago their hometown.

Chicago's association with the King began when the Colonel hired two Chicagoans, Al Divorin and Tom Diskin, who would later become among the Colonel's most trusted confidants. In 1958, another Chicagoan, Elvis' right-hand man, Joe Esposito, found his way into Elvis' most trusted inner circle of friends, known as the "Memphis Mafia," when they met in the army.

On April 30, 1957, Elvis walked into Radio Recorders studio in Hollywood to record "Jailhouse Rock," a song from the critically acclaimed motion picture. It would be the third song that year to top the Billboard Pop, Country, and Rhythm and Blues charts. "Jailhouse Rock" would also become the staggering fifth and final triple crown recording of Elvis' career...

(January 8, 1935, Tupelo, MS – August 16, 1977, Memphis, TN)
Elvis Presley (full name Elvis Aaron Presley) is the most outstanding personality in showbiz ever since, and the most popular entertainer the world has ever seen! His musical influence within music history and its following generations of musicians is still unbroken. His huge 'Blast-Off' in the mid-1950s, the rising star from a simply called 'Hillbilly Cat' (at Sun Records) to a lascivious Rock'n'Roll singer with charisma, a male sex symbol (then at RCA Victor) soon popularized him as "The King of Rock'n'Roll" or simply "The King".
His first cut within his tremendous career happened between October 1958 and March 1960 while Elvis was on duty with the U.S. Army and stationed in Germany. It was there in 1959 when he met his later wife Priscilla Beaulieu at age 14. Elvis and Priscilla married on May 1, 1967 in Las Vegas (divorce in 1973). Elvis evolved into an all-around entertainer after his Army service and started starring in Hollywood films. 33 movies in total, including the two concert documentaries 'That's The Way It Is' and 'On Tour'. He again shook the world with his 1968 NBC Comeback TV Special after his movie period without any stage appearances.
This TV special included the first ever unplugged session presented together with musicians from the early days such as Scotty Moore and D.J. Fontana. 1973 saw THE TV mega event at all: Elvis Presley, 'Aloha From Hawaii via Satellite'! Elvis' Honolulu appearance, the first time that a show was broadcasted worldwide via satellite! He was ahead of his time! Elvis Presley had 148 US single chart hits, including some so-called double-sider when A- and B-side both hit the charts like his 1956 smash 'Don't Be Cruel b/w Hound Dog', plus 15 EP hits between 1956 and 1977. Two billion of sold media and sound carriers by Elvis Presley is the estimated number! He received 14 Grammy nominations until 1978 and three Grammy for his Gospel interpretations. Elvis was the youngest artist when honored with the Bing Crosby Award (Lifetime Achivement Award) in 1971.
He is presented in 5 Halls of Fame (Rock'n'Roll, Rockabilly, Country, Blues and Gospel). Six of his song interpretations are collected in the Grammy Hall of Fame. On top of it all Elvis Presley got the most gold and platinum records and a Diamond-Award. He definetly is the 'Best selling solo artist in U.S. History' (RIAA – Record Industry Association of America)! Elvis Presley CD albums, vinyl records as LPs or singles at 45rpm - Bear Family offers a huge number of various Elvis Presley CDs, vinyl-LPs and 45rpm singles, vinyl- and CD box sets, books and mags, DVDs, unique and extraordinairy memorabilia! Let's say it in the words of one of Elvis sixties album title: There is "Something For Everybody"! And hey, you name it! Elvis Presley is the King of Rock'n'Roll, the biggest icon in showbusiness, and a great person who lives on forever!
Bear Family Records treats his legacy with the most respect and an optimum capacity of expert knowledge.
Review 0
Read, write and discuss reviews... more
Close menu
Customer evaluation for "Encore Performance III - Back To Chicago 1977"
Write an evaluation
Evaluations will be activated after verification.
Weitere Artikel von Elvis Presley
Hint!
Elvis Presley: The Elvis Is Back Sessions (4-CD) Art-Nr.: CD975139