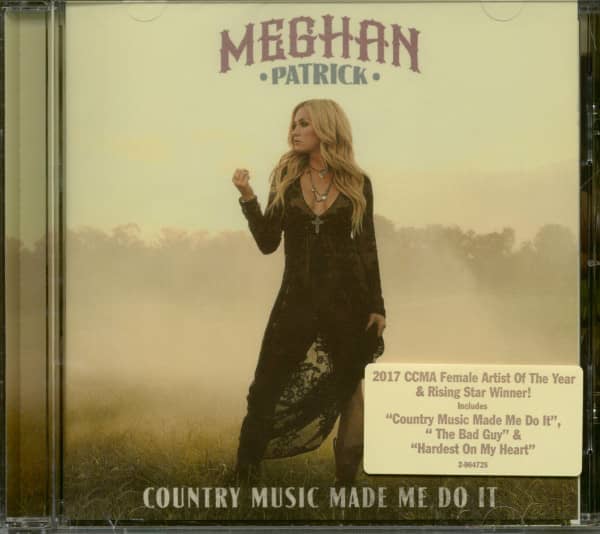 Meghan Patrick: Country Music Made Me Do It (CD)

(Warner Music Canada) 12 tracks
-
'There’s always a high and lonesome song that keeps on pushing me along.'
This line from the title track and lead single of Meghan Patrick’s latest album Country Made Me Do It is classic country and serves notice that she is determined to revive and carry the traditional torch. Meghan lives hard and loves hard, and her songs reflect this passion. She loves trucks, fishing and hunting, riding horses and a good stiff glass of whiskey, and all of these elements fuel her countrified lyrics. Think the free spirit of Emmylou Harris from those magical days when she performed with Gram Parsons, combined with the spark and sensuality of Tanya Tucker, the only female to crack the Outlaw genre, and you begin to have some idea of what Meghan Patrick is all about.

It’s been a banner year-and-a-half for the Bowmanville native in terms of radio play, live shows and awards ceremonies. Her debut album Grace and Grit, sprouted four Top 20 singles including her stirring duet with Joe Nichols on the Top 10 hit Still Loving You. In concert, she’s performed with superstars like Lady Antebellum, Dwight Yoakam, Kip Moore and Martina McBride, peaking with a show-stopping duet with Keith Urban at the Timmins Stars & Thunder Festival. She topped things off by winning Female Artist of the Year and Sirius XM Rising Star awards at the 2017 Canadian Country Music Awards. “I did not expect those awards and I was certainly overwhelmed at the time. Now I just feel really appreciative and grateful that my fans and peers felt that I deserved those honours. In one sense you can say that my career has been kind of short in terms of being in the mainstream and having a record deal, but within the last year the trajectory has been huge.

' Country Music Made Me Do It was produced by veteran Nashville song writer and producer Jeremy Stover, and mixed by studio heavyweight Chris Lord-Alge who has won Record of the Year Grammys for his work with everyone from Alison Kraus to U2. Meghan’s debut record had a potpourri of producers including Nickelback’s Chad Kroeger and Vince Gill but this time out she was looking for a more homogenous sound and she feels that she struck gold with Stover.“ When we started the project we wrote together, coming up with several songs for the album. Jeremy and I really clicked well and we had great chemistry in terms of writing. We eventually got a large chunk of the songs together through him and some of the other writers in his publishing company. When he said he’d love to produce the album I said, ‘Well yeah, I thought you’d never ask’.' Meghan, who now lives in Nashville, co-wrote all but one of the 12 tracks on the album.

Some of her other co-writers include Kelly Archer (Brett Young, Dustin Moore) and Justin Weaver (Kip Moore, Jason Aldean), who helped pen Walls Come Down, an ominous number about family strife. Case Of Beer And A Bed, written with Derick Ruttan and J.T. Harding (Dierks Bentley, Kenny Chesney), is a sentimental song about going back to the basics. Meghan co-wrote the title track with Stover and roots singer/songwriter Dan Isbell. The singer has recently experienced a lot of highs with the CCMA Awards and chart successes that she has earned, but there have also been a few lows such as the end of a long term relationship. Country Music Made Me Do It captures some of the peaks and valleys with heartfelt emotion in a traditional country setting.

'It’s just kind of a thing where music in general has been the driving force behind almost every decision I’ve made in my life. To facilitate my career it’s always been my priority and my number one objective, so you could say that country music made me do a lot of things. I love traditional country music. It’s my passion and my goal has been to bring a little more of that traditional sound into the mainstream country market. A lot of what’s out there right now is more on the pop side of country and there’s nothing wrong with that, but it’s just not what I want to do.'

Video von Meghan Patrick - Country Music Made Me Do It (CD)

Article properties: Meghan Patrick: Country Music Made Me Do It (CD)