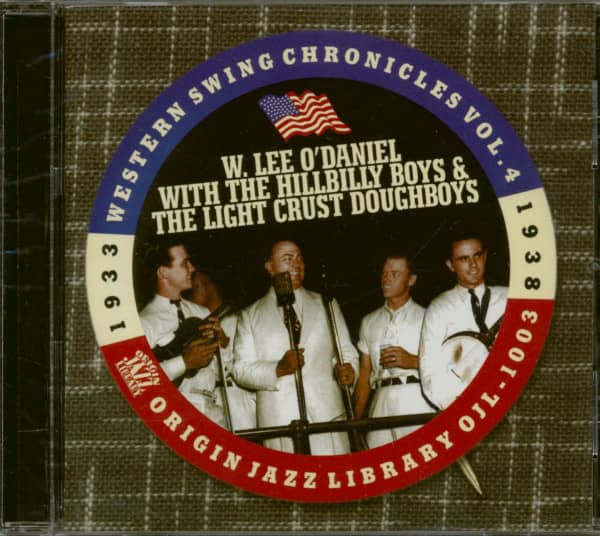 (2005/ORIGIN JAZZ LIBRARY) 29 tracks with 28 page booklet. Although W. Lee O'Daniel (1890-1969) Never Sang Or Played An Instrumen He Was One Of The Most Important Figures In Early Western Swing. In 1930, The Erstwhile Flour Salesman Was The Light Crust Doughboys' First Radio Spokesman. Fronting Another Group, The Hillbilly Boys, O'Daniel Successfulla Ran For Texas Governor With A Combination Of Speeches, Poetry, And Hot String Band Music. This CD Highlights Recordings Made By Both Of These Groups Between 1933 and 1938.

The Rodgers influence, insofar as western swing groups was concerned, generally came from a handful of singers. The main ambassadors in these groups were Tommy Duncan and Leon Huff. Huff (1912-1952) joined the Light Crust Doughboys in Fort Worth in 1933, hired by W. Lee O'Daniel to replace Milton Brown when Brown quit to form his band, the Musical Brownies. Huff brought a love for Jimmie Rodgers songs to the Doughboys; he would perform and record several of these during his time with O'Daniel, both with the Doughboys and later with O'Daniel's second group, the Hillbilly Boys, the band that campaigned with O'Daniel in his gubernatorial run in 1938. Huff recorded his sprightly version of Yodeling Ranger with this group in June 1937. The song had been written by Raymond Hall in 1931 on the occasion of Rodgers' honorary induction into the Texas Rangers. Rodgers didn't record the song until his last session, in New York in May 1933, when he was more dead than alive.