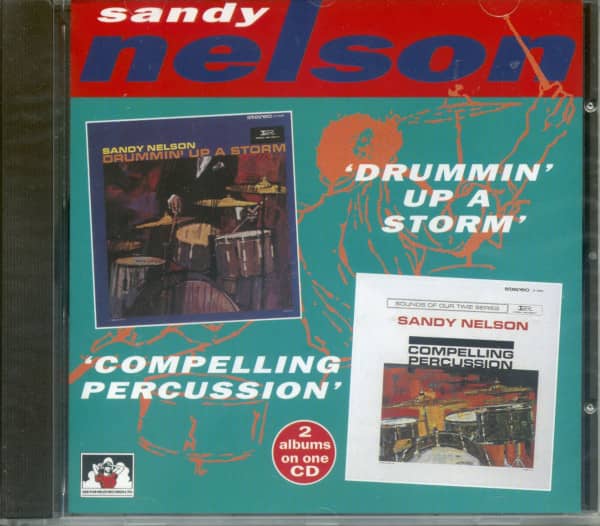 (See For Miles) 16 tracks Imperial 1962
-
Drummin' Up A Storm became Sandy Nelson's fourth hit single and though it was a powerful sound indeed, it only rose to No.67 in the U.S. To be fair, the flip had also attracted attention and that too charted at No.86 probably stopping the 'A' side rising any higher. The single also did quite well in the U.K. reaching No.39 in our top fifty.

The Drummin' Up A Storm album made its debut on 14th July 1962, and promptly rose to No.55 in an eleven week stay. Virtually all the first side is that delicious big rocking band sound that Sandy favoured so much and Castle Rock, Sandy, I'm In Love Again together with the No.75 hit single All Night Long illustrate this particular Nelson style. Brilliant party music and driving R&R at its best.
Sandy commented: 'People bought my records because like The Ventures, they have a good party sound. Lots of people used to come up to me and say they bought all the records with a drum solo in them. They did a lot of 'modern' dancing - you know, the artistic type - dancing to Birth Of The Beat or Teen Beat and so on. I've never seen it done but I'd like to -it'd be interesting. Let There Be Drums was big in French discos even in the early '70s.'

Those waiting impatiently to hear Sandy's soloing were not to be disappointed. The enormous All Around The World With Drums stands up equally well today as it did thirty years ago. Very African in arrangement, it was not the kind of track you put on loud - it would scare listeners to death! Carefully and cleverly put together, it is a collection of unique sound effects even today's recording engineers would admire and those magic drums are astonishing. It is a recording that was light years ahead of its time and showed even more of the imagination and creativity of a then still young Nelson. Someone should rediscover it as a possible sci-fi movie soundtrack and perhaps with this See For Miles reissue they will. The drum laden title track and the Diddley-like Tub Thumpin' didn't do his reputation any harm either.

And Then There Were Drums was Nelson's next and last single hit for a while. It was much faster than any of his previous sides and had an absolutely vicious guitar line competing with the hammering tom toms behind it. It deserved better but there were no complaints when it scored at No.64 in the US charts. It wasn't an international smash like others although it was well received this side of the Atlantic and probably didn't make it because of lack of radio plays compared to his previous hits.

The album had an early title change in the planning stages to Compelling Percussion. It entered the top 200 in America on 3rd November 1962, at No.141, but failed to ignite and slipped out three weeks later. Which was a shame because Compelling Percussion was the most adventurous Nelson set so far and certainly the one that drum fans had waited for.
Almost abstract in nature, it begins with a really strange and gigantic opus called Civilisation where microphones were laid on the floor and the sound of crickets was piped in. There was an 'Inca' feel to the track to begin with, until the reverbed guitar gave way to the dramatic snare drumming. It was hurtful for Sandy to have an early UK press mention describe the album as 'uninspired hide walloping' Uninspired? You have to be kidding! The only problem with it, was that it was three miles left of any mainstream pop music happening in 1962 and much like the earlier All Around The World With Drums is totally relevant today and ripe for rediscovery.

Richie Podolar, Sandy's mate, was apparent again as player and co-writer of the boppy Alexes and Chicka Boom. Jump Time is another meaty twelve bar guitar and drums jogger. enhanced by a stirring sax solo in the centre and a pleasing piano bringing up the rear. Civilisation on side one, is a long track but nothing could prepare us for the only two tracks on the second side of the album! They are further drum concepts or 'symphonies' as one Nelson supporter called them recently, entitled Drums For Drummers Only and Drums For Strippers Only, taking up as we said the entire side! Layer upon layer of big chunky tom tom rhythms just rock and it is easy to see how dancers could relate to the earthy beat. The snare drum was snappier and crisper than ever and how the man uses it in twenty minutes of percussion bliss! On his incredible and real drum sound. we asked Sandy how he tuned his drums.

He had no hesitation in explaining: 'The bass drum I've found to be almost to the point of being unmuffled. I realise you can't really get away with that in the studio but it really fills up a room and when you get about 25 feet away. you don't quite hear the boom part - it comes out like a big bomp. The floor tom tom is very important to me -I like it just to the point of not being too loose and having a ring to it. The snare drum I like tight. I notice when I've been practising a lot, doing stick control exercises and my technique improves, I seem to want to tune it up tighter-there's more snap and pop to it.'

When describing the early '60s recordings like those on these albums, Sandy said, 'The material I call the home spun stuff, done at home on my own machine, or at Richie's studios I really liked to do because it was always very creative and often I'd do all the overdubs myself.' There was still much more to come ----- from the now established drum king and Drummin' Up A Storm and Compelling Percussion were both class acts which-probably closed the first phase of Sandy Nelson's illustrious career. If the actual chart positions had slipped a little.

Sandy had little to worry about in 1962. Eight single sides had made the best sellers and five Imperial albums charted in that year - three of them being on chart at once! (Davy Pecket) 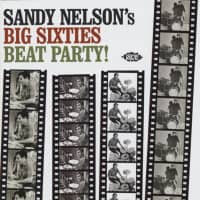 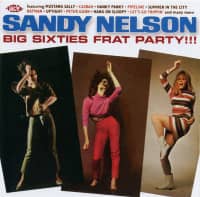