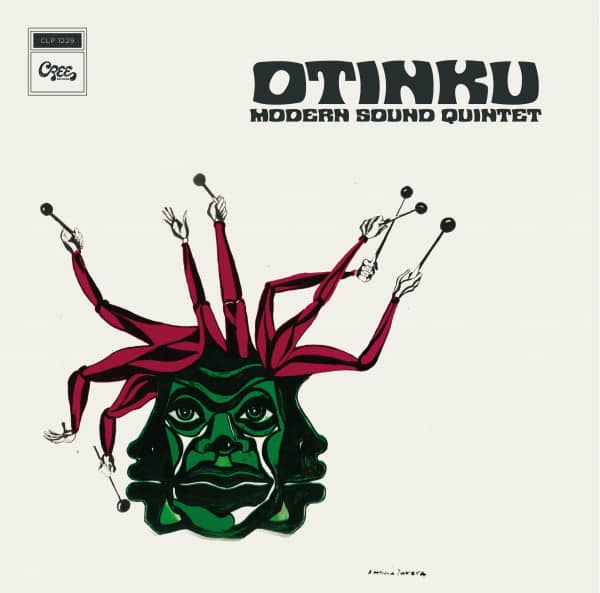 1 Vinyl LP (180 gram) in gatefold sleeve. 11 tracks. Playing time approx. 39:07 mns.
Perhaps the first time that steelpan is featured on an album as a jazz instrument in Europe, ‘Otinku’ is an important, groundbreaking jazz album that offers a mix of Caribbean and African roots with jazz and pan. The Modern Sound Quintet’s leader Rudy ‘Two Left’ Smith grew up in Port of Spain, Trinidad in the Caribbean and has had an illustrious career as a pannist - having traveled with one of the first steelbands to perform all over Europe which then morphs into a jazz ensemble. He has continued to be a leading jazz pannist performing all over the world and recorded extensively.
The Modern Sound Quintet recorded ‘Otinku’ for EMI Finland. The album mixed originals and covers of both long time jazz standards and recent jazz hits. The title track offers the strongest African element Kofi Ayivor chanting and Rudy Smith trying to give the pans a balafon quality to its sound in that piece. They choose two jazz standards to work through. Bye Bye Blackbird is a song from 1926 sung by crooners like Gene Austin. Didn’t take off as a jazz standard until it was recorded in 1956 by Miles Davis. The other song from the 1920s, Softly As In A Morning Sunrise written for an operetta at the time had been picked up by jazz artists from Artie Shaw to Miles Davis, Milt Jackson to John Coltrane and many others.

The following three numbers were very popular at the time. Mercy, Mercy, Mercy had been written by keyboardist Joe Zawinal while a member of Cannonball Adderley’s group in 1966 and was title track off their album that went to be a top ten hit. Bag’s Groove was composed by vibes player Milt Jackson and first recorded by his quartet but then made famous when recorded by Miles Davis in a group with Jackson. Herbie Mann’s Memphis Underground was the title track to an album that mixed soul and r&b featuring Roy Ayers on vibes and went on to be a huge crossover hit. With a driving bass and both congas and trap drums pace Modern Sounds version is at a faster pace than Mann’s original. Smith added originals in various styles. The longest jam on the album was Flamenco Groove, based on his fascination with the flamenco music Rudy Smith heard while based in Spain and wanted to experiment with improvising on its sound.

The Modern Sounds quartet’s George ‘Shockness’ Allyn s learned to play trap drums and Rudy Smith focused his tenor pan playing on jazz improvisation. Initially, Modern Sounds were based in southern Spain but toured widely going to Gibraltar, Tangiers and Mallorca. They took the name Modern Sounds in tribute to the Modern Jazz Quartet which featured Milt Jackson and because they wanted to push pan as the most modern sound in jazz.

In 1968, Rudy Smith started up a new version of the Modern Sounds Quartet in Stockholm, Sweden using Caribbean musicians he met there as well as locals like Swedish trumpeter Lars Samuelson who played with them at times.
A friend introduced him to pianist John Roachford from Barbados who had gone to London before making his way to Stockholm. He introduced Rudy to a bass player he had worked with Sigfried McIntosh from Surinam who had been based in Holland before also moving to Stockholm whose brother Leo Gilles had played with Rudy in the Modern Sounds in Gibralter a few years earlier. Then they got as their drummer George ‘Shockness’ Allyn who had joined a rock group and was headed to Finland when he decided to bail on that plan and moved to Stockholm to hook up with his old friend Rudy Smith again.

This new Modern Sounds Quartet started getting regular gigs all over Sweden and went from a quartet to a quintet after congo player Kofi Ayivor sat in with them at a Stockholm club called ‘The Drugstore’.  Aloyer was from Ghana and had grown up playing in highlife bands in Ghana before coming to Europe as a musician where he had been touring with the Silvio Cambert Cabaret Group that played Cuban and Latin music.

They were sought out to record an album by EMI and set out to do an album that mixed originals and covers of both long time jazz standards and recent jazz hits.

As a quintet the band was successful and traveled all over Scandinavia. Ayivor continued with Modern Sounds until in 1973 he got the call to come join the very successful band Osibisa based in London which was also a melding on Africa and the Caribbean players though less jazz oriented. After Kofi Ayivor’s departure, Modern Sounds went through further changes adding horns and several new members. They changed their name to Modern Sound Corporation, moving their sound to more jazz rock with a reggae and funk influences with singers and playing in disco clubs. They released an album Dancin' Feetin 1978 on K-tel Records. They continued until the end of 1980.

Sadly, most members of the Modern Sounds Quintet have passed on. John Roachford died in 2010 having moved back to Barbados. Shackness stayed on in Sweden and died a few years ago.Sigfried McIntosh passed away in 2017.