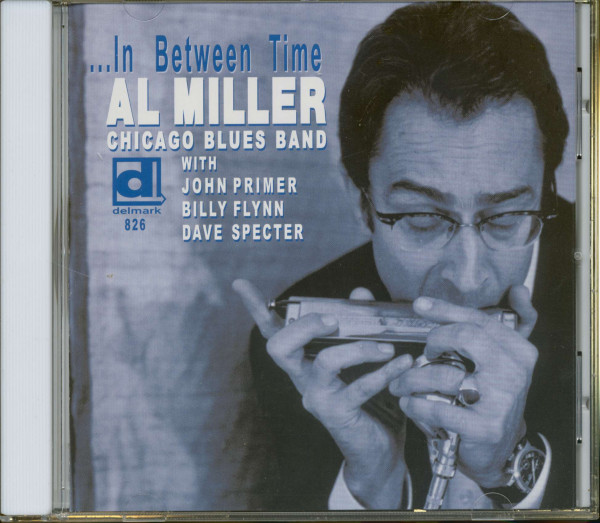 Al Miller: In Between Time

Harmonica player Al Miller brings in three guitar aces to help him create this unique blues album: John Primer, Dave Specter & Billy Flynn. But Al doesn't just play harp. Whether he iswailing away on harmonica, singing, writing songs, or providing guitar accompaniment, Al imbues every aspect of his involvement in the music with feeling, which, as every blues fan knows, is what the blues is all about.

Al Miller
In 1964 harmonica player, guitarist and singer Al Miller was spending his nights on the south side with Chicago Slim and Johnny Young. By '66 Miller was a member of The Wurds (a/k/a The Dirty Wurds), the first white blues band signed by the prestigious Chess label. Miller moved to the Bay Area where he reconnected with his friend, former Paul Butterfield guitarist Michael Bloomfield. Miller and Bloomfield played together around San Francisco in 1969 and '70. Miller made his way back to Chicago, began a career outside of music and settled down to raise a family but Blues was never far away. In '95 Miller returned with WILD CARDS (Delmark 675) which was followed by ...IN BETWEEN TIME. Originally released in 2000 these recordings features some seldom-covered classics and Miller's own deeply personal originals.

has been out there in the trenches of the Chicago blues scene since the first blues revival of the 1960s. Following closely in the footsteps of Paul Butterfield. Charlie Musselwhite. and others in that first generation of young white blues enthusiasts in the city who decided to take matters into their own hands, by 1964 he was spending his nights on the south side with Chicago Slim and Johnny Young, playing for a discerning audience who had brought their love of the blues up from the south with them. By 1966 Miller was a member of The Wurds (a/k/a The Dirty Wurds). likely the first white blues band signed by the prestigious Chess label in the wake of the success of the Butterfield band.

To the chagrin of Chess, the band didn't become the next Butterfield Blues Band, but they recorded a now-highly prized single: later in the decade they would record a single that has become legendary among the proto-punk / garage rock crowd. the snarling Why? But by this time Miller had moved on, following his blues muse out to the Bay Area of California, where he reconnected with his friend from Chicago. former Butterfield guitarist Michael Bloomfield. Miller and Bloomfield played together around San Francisco in 1969 and '70. With the afterglow of the San Francisco 'Summer of Love' and hippie era fading. Miller made his way back to Chicago to begin a career outside of music and raise a family. Blues was never far away though: the club scene still occasionally lured him out, and in the late '70s he recorded as a member of The Bionic Blues Band.

By the early 1990s Miller was ready to hit the studio again. and this time gathered a gang of blues friends to record his debut CD WILD CARDS (Delmark 675). which featured Willie Kent. Dave Specter. Tad Robinson and Steve Freund among others. for a spirited session that included a well-chosen line up of blues obscurities and Miller originals. The CD was well-received. but health issues sidelined Al for a while and he didn't get back into the studio for a follow up for several years. When he finally did. he picked up right where he's left off. gathered some of Chicago's best blues talent to help out. and the results are ...IN BETWEEN TIME. Once again.

Al mines the blues catalog for some seldom-covered classics. and mixes in his own deeply personal originals. including the title track In Between Time. Al Miller isn't out to reinvent the wheel. or shoehorn disparate genres into an ill-fitting blues hybrid and call it "original" - he's just playing the style that moved him to start playing blues as a kid almost a half century ago. the sounds that are closest to his heart. and the music that he does best: the blues. —Scott Dirks 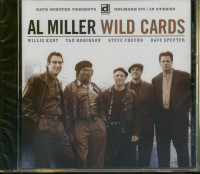