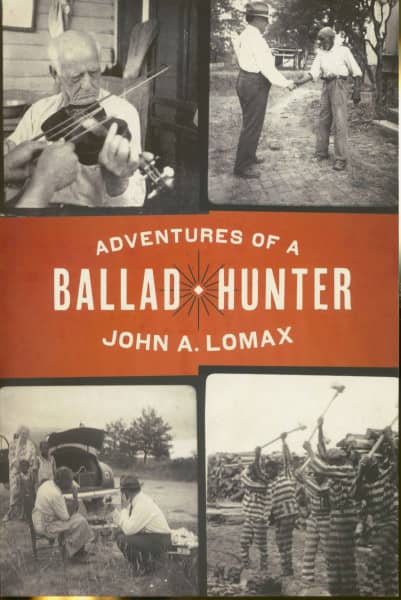 John A. Lomax: Adventures of a Ballad Hunter

'At long last, John Lomax's account of his efforts to elevate folk songs to the realm of high literature is back in print. It's a story of one man's struggle to get singers to sing for him, scholars to pay attention, and for all Americans to hear their own history unfold before them in song. A true American odyssey.'
JOHN SZWED, author of Alan Lomax: The Man Who Recorded the World

Adventures of a Ballad Hunter is a memoir of Lomax's eventful life. It recalls his early years and the fruitful decades he spent on the road collecting folk songs, on his own and later with son Alan and second. wife Ruby Terrill Lomax. Vibrant, amus-ing, often haunting stories of the people he met and recorded are the gems of this book, which also gives lyrics for dozens of songs. Adventures of a Ballad Hunter illuminates vital traditions in American popular cul-ture and the labor that has gone into their preservation.

JOHN A. LOMAX (1867-1948) recorded classics such as 'Home on the Range' and 'Goodnight Irene' and with son Alan helped launch the musical careers of Lead Belly and Pete Seeger. His extensive record-ings and papers are housed in the Library of Congress and the Dolph Briscoe Center for American History at the University of Texas at Austin.

Article properties: John A. Lomax: Adventures of a Ballad Hunter