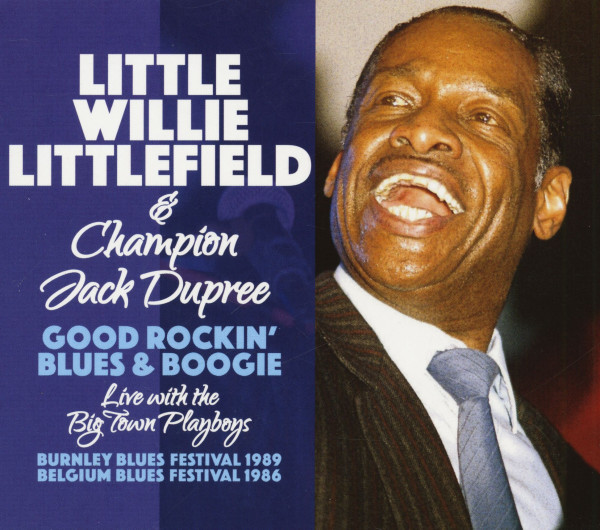 (JSP Records) 33 tracks, 2CD BOX SET PLUS 12-PAGE BOOKLET - BURNLEY BLUES FESTIVAL 1989.
Blues and R&B legends Little Willie Littlefield and champion Jack Dupree had a lot in common. Both had long recording careers stretching back to the 1940s, recording for independent record labels; both chose to live in Europe; both recorded albums in Europe; and both headlined the first-ever Burnley Blues Festival in the United Kingdom in 1989.

Blues fans were treated to a weekend of blues, R&B and boogie, with Willie leading the program on March 23 and Jack accompanied the following night by the Big Town Playboys, who perfectly recreated the rhythm and blues that Willie and Jack recorded in the late 1940s and 1950s.

The tracks collected here are from their Burnley performances, with the exception of three tracks Willie recorded with the Playboys at the Belgium Blues Festival in 1986, which were later broadcast on national BBC radio on the Paul Jones Show.

"Little Willie Littlefield was in the best form I've ever seen him in. He gave us a selection of straight blues and boogie." Tony Collins, Juke Blues magazine

"Jack Dupree and the Big Town Playboys took the room apart with '50s classics, and the audience cheered him on after every number." Tony Burke, Blues & Rhythm magazine

The proverbial child prodigy, Little Willie Littlefield so thoroughly absorbed the thundering piano prowess of his hero Albert Ammons that he was rocking houses on Houston's Dowling Street in his mid-teens. His penchant for romping boogies made him a natural answer to fellow Houstonian Amos Milburn, then a red-hot hitmaking commodity, so Modern Records swept him up in 1949 and brought him to L.A. His habit of setting piano triplets against a blues backbeat was soaked up down in New Orleans by Fats Domino, who made it a primary facet of his sound

The native of El Campo, Texas (where he was born September 16, 1931) made his first 78s for Eddie Henry, the owner of Eddie's Record Shop on Dowling, who was so taken by Willie's sound that he launched his self-named Eddie's label to introduced Littlefield to the public, starting with Little Willie's Boogie in '48. Then Jules Bihari came to Houston and heard Little Willie at the El Dorado Ballroom. His first Modern hit in '49, It's Midnight, was done in Houston with future Ray Charles saxman Donald Wilkerson in the band, but subsequent Littlefield releases were cut on the coast. That includes Hit The Road, a self-penned jump (Jules Bihari appended his writing sobriquet to this one too) cut December 11, 1949 in L.A., that features some trebly in-your-face guitar, maybe by Chuck Norris.

Willie managed two more R&B chart entries, Farewell and I've Been Lost, before exiting Modern in 1952 and moving over to Federal Records. There he waxed the original version of Kansas City as K.C. Loving (somehow it avoided the charts altogether), as well as such memorable titles as The Midnight Hour Was Shining and Sitting On The Curbstone. While living in the Bay Area, Willie turned up on Don Barksdale's Rhythm logo with Ruby Ruby in 1957, then spent much of the next two decades entertaining San José supper club patrons. Littlefield moved to the Netherlands in the '80s and has undergone quite a career revival since then, playing prestigious festivals worldwide (including the Ponderosa Stomp and the Chicago Blues Festival in 2009).