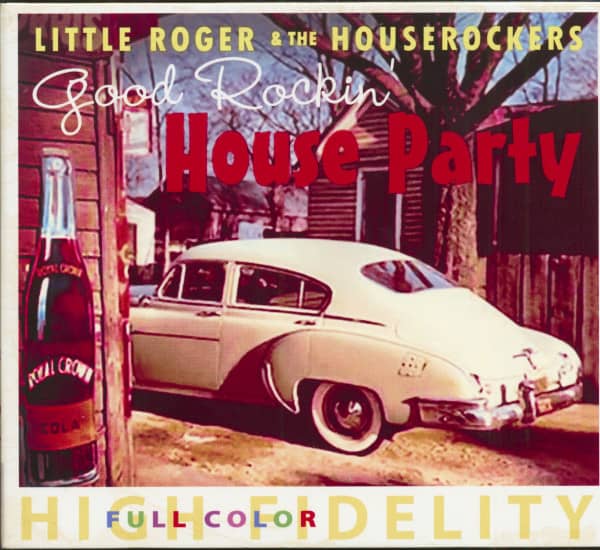 (2017/9a Music) 13 Tracks - Digipack - Authentic 50s Blues and Jump Blues by one of Germany's finest bands! Led by the British harp player and singer Roger Wade and driven by the energetic performance of guitarist T-Man Michalka, whom I regard one of the finest in Europe, the combo's delivering a set of SIX originals, and some fine covers of songs originally by Roy Milton, Willie Nix, Jimmy Reed and others! Brilliant!

First-class 50s Chicago blues, boogie and swinging jump blues – that’s what you can expect from Little Roger & The Houserockers. The explosive stage show, the musical teamwork and their deep love of the blues have made Little Roger & The Houserockers one of the top attractions at many a gig in clubs and at festivals alike. This reputation has made the band one of the most popular acts at festivals in Germany, The Netherlands and further afield.

The band (England/Germany) is based in Germany and was founded in 1994. Their debut CD "Jumpin' The Blues" appeared in 1997 on Magic Angel Records and received high acclaim from both critics and audiences. The second CD by the band, "No Kiddin'!", was released on "Out Of Space", one of the leading blues labels in Germany. "Cut It While It's Hot!",  was recorded together with the great Tee (Electric Kings) as producer and special guest, as well as Thomas Feldmann on baritone and tenor sax. Their most recent CD "Jumpin' at Jack's Joint" featured not only Thomas and Tee again, but also the sax lines of Sax Gordon.

The international line-up is fronted by the English bandleader Roger C. Wade (harp/vocals), known for his stage presence and powerful harmonica, ensuring a great atmosphere in both smaller and larger venues. Marion Wade (piano) plays blues und boogie in the style of the greats from Chicago, feeling as much at home in rolling shuffles and pounding boogies as in slow blues à la Otis Spann.Tilmann Michalke (guitar) is firmly rooted in the traditions of the 50s, swinging in both his solos and consummate accompaniment.Freddie Werth (bass) and Chris Seidel provide the band with the unmistakable beat. All in all, a dynamic live blues show not to be missed.