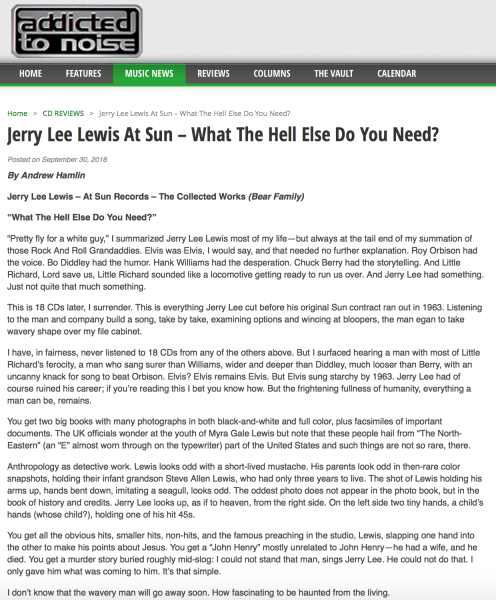 Jerry Lee Lewis At Sun – What The Hell Else Do You Need?

“What The Hell Else Do You Need?”

“Pretty fly for a white guy,” I summarized Jerry Lee Lewis most of my life—but always at the tail end of my summation of those Rock And Roll Grandaddies. Elvis was Elvis, I would say, and that needed no further explanation. Roy Orbison had the voice. Bo Diddley had the humor. Hank Williams had the desperation. Chuck Berry had the storytelling. And Little Richard, Lord save us, Little Richard sounded like a locomotive getting ready to run us over. And Jerry Lee had something. Just not quite that much something.

This is 18 CDs later, I surrender. This is everything Jerry Lee cut before his original Sun contract ran out in 1963. Listening to the man and company build a song, take by take, examining options and wincing at bloopers, the man egan to take wavery shape over my file cabinet.

I have, in fairness, never listened to 18 CDs from any of the others above. But I surfaced hearing a man with most of Little Richard’s ferocity, a man who sang surer than Williams, wider and deeper than Diddley, much looser than Berry, with an uncanny knack for song to beat Orbison. Elvis? Elvis remains Elvis. But Elvis sung starchy by 1963. Jerry Lee had of course ruined his career; if you’re reading this I bet you know how. But the frightening fullness of humanity, everything a man can be, remains.

You get two big books with many photographs in both black-and-white and full color, plus facsimiles of important documents. The UK officials wonder at the youth of Myra Gale Lewis but note that these people hail from “The North-Eastern” (an “E” almost worn through on the typewriter) part of the United States and such things are not so rare, there.

Anthropology as detective work. Lewis looks odd with a short-lived mustache. His parents look odd in then-rare color snapshots, holding their infant grandson Steve Allen Lewis, who had only three years to live. The shot of Lewis holding his arms up, hands bent down, imitating a seagull, looks odd. The oddest photo does not appear in the photo book, but in the book of history and credits. Jerry Lee looks up, as if to heaven, from the right side. On the left side two tiny hands, a child’s hands (whose child?), holding one of his hit 45s.

You get all the obvious hits, smaller hits, non-hits, and the famous preaching in the studio, Lewis, slapping one hand into the other to make his points about Jesus. You get a “John Henry” mostly unrelated to John Henry—he had a wife, and he died. You get a murder story buried roughly mid-slog: I could not stand that man, sings Jerry Lee. He could not do that. I only gave him what was coming to him. It’s that simple.

I don’t know that the wavery man will go away soon. How fascinating to be haunted from the living.