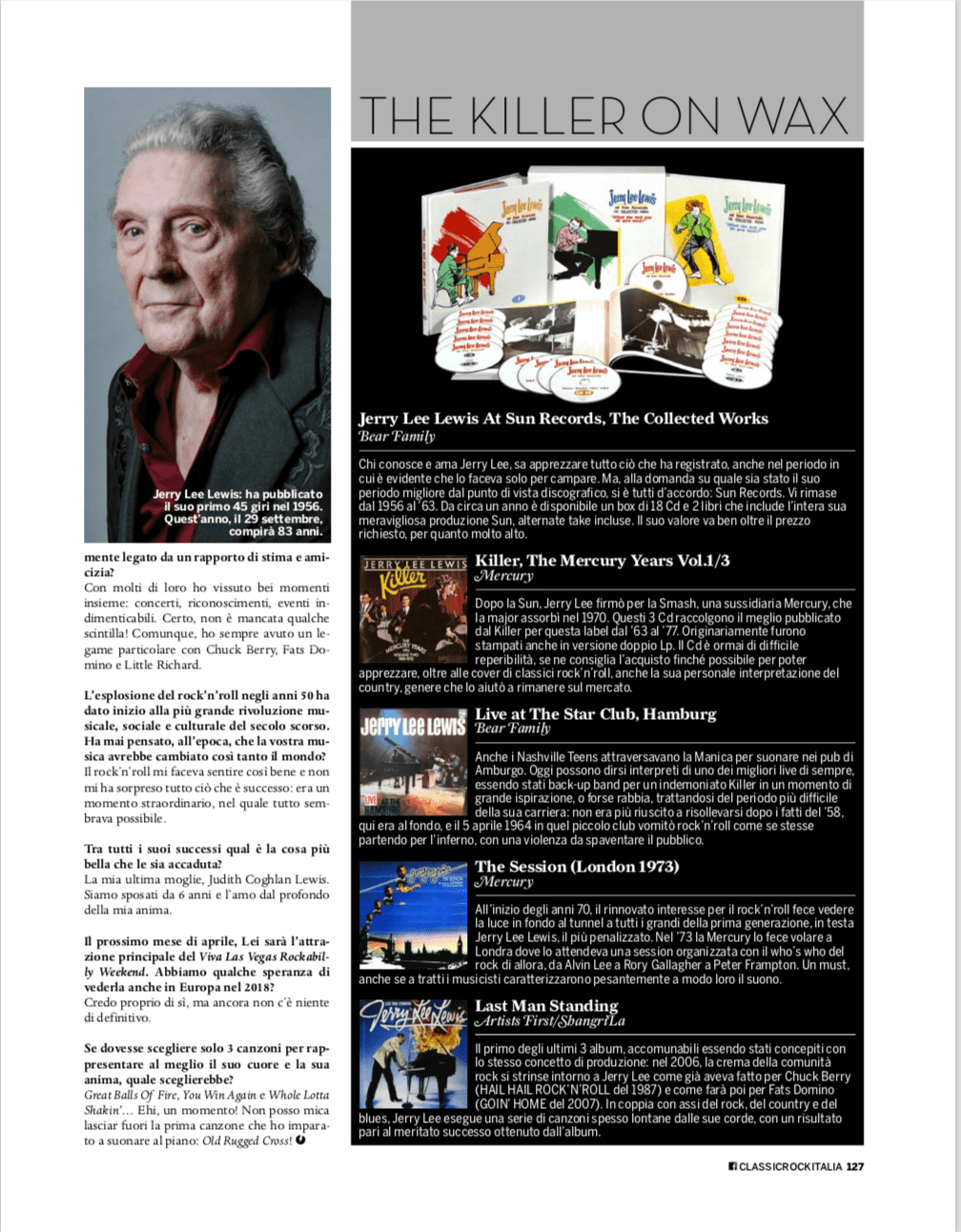 LAST MAN STANDING: This was the title of one of the most significant records by Ferriday's artist, Louisiana, released about ten years ago. He proclaimed in a brazen way like the Killer, this is the name that already, as a rage, they drowned him because of his reckless and overpowering character, he was the only survivor of that generation of pioneers who, in the 50s, changed the history of modern pop music, also starting an unprecedented cultural revival. In fact, in 2007 there were still Chuck Berry and Fats Domino around, who unfortunately left us last year, and also Little Richard, now in such a precarious state of health that any public appearance is now impossible.

So, this time, the definition in Last Man Standing is dramatically unquestionable: Jerry Lee Lewis is really the last living testimony of an America
of other times, of authentic and original rock'n'roll. The last one still capable of climbing on stage, at 82 years old really played, to celebrate the ancient ritual. As he did in Memphis the last of the year, in his Jerry Lee Lewis' Cafe & Honky Tonk Club of Beale Street, to greet the arrival of 2018, lighting up his fans with the last precious gleams of his inimitable talent. That is why we like to celebrate it. Because one like him does not let himself be set aside so easily. He went through triumphs, arrests, alcoholism, family trage- d, falls and ascents, and it is always there: the worst "son of a bitch" of rock'n'roll, the figure who best represented the fire that burned strong and uncontainable in the bodies of young teenagers of the 50's.

No one else has been as bully, scapegoated, impertinent as "the real wild child". He is the incarnation of transgression, he is the bastard that generates - fans and rock artists would have liked to have been there without having the courage. Other than punk,

Johnny Rotten and little brothers in life, in front, have collected daisies. The American company of 1957 was not the English one of 20 years later. To break the ice as he and his fellow adventurers did, the first Elvis, that other hot head of Gene Vincent, or Little Richard - egocentric, black and gay -, you needed to have so much courage, or so much unconsciousness and uncontrollable madness. Jerry Lee Lewis was not only shouting and wagering. He played his stubborn riffs mistreating the keyboard even with his heels and then, squeezing, he gave a violent kick to the stool to get rid ideally of all the bigots con- ventions of American society. As he did at the 1957 Steve Allen Show singing Whole Lotta Shakin' Goin' On, causing scandal and excitement. An exhibition that anyone who wants to know how the sacred fire of rock'n'roll is should look for on YouTube. That sacred fire once, Jerry Lee Lewis even came to put it on the piano, evoking Great Balls Of Fire, one of its most celestial battle horses that also gave the name to a film about his life. When asked if he liked the film, he replied: "Yes, but there's something I don't like... After my story, The End was written. And the end, for the Killer, has not yet arrived...".

Talkin' with the Killer
"Long distance information, give me Mem- phis Tennessee..." in line with the legend!
Happy evening Mr Lewis, a concert on New Year's Eve evening in its local splendor of Beale Street: what better way to welcome the New Year?!
Yeah! Playing is always a magical moment for me. I like to be in my club and close to my people. It makes me feel good! And then, do you know that I love my fans more and more?
Little Richard and she are the last gigan-you're among the pioneers of rock'n'roll. Is there anyone with whom he has been most closely connected by a relationship of esteem and love?
With many of them I have lived good times together: concerts, awards, events that I can't forget. Of course, there was no shortage of sparks! However, I've always had a particular le-game with Chuck Berry, Fats Domino and Little Richard.

The explosion of rock'n'roll in the 1950s initiated the biggest revolution in the last century in the social, cultural and economic spheres. Did you ever think, at the time, that your change would change the world so much? Rock'n'roll made me feel so good and it didn't surprise me what happened: it was an extraordinary moment, in which everything was semiably good possible.
What is the best thing of all your successes that happened to you?
My last wife, Judith Coghlan Lewis. We've been married for 6 years and I love her from the depths of my soul.
Next April, you will be the main attraction of the Las Vegas Rockabil- ly Weekend. Do we have any hope of seeing it in Europe in 2018?
I think so, but there is still nothing definitive.
If you only choose 3 songs for rap- present your heart and the