Continuation of episode 1:
'Oskar Joost and his orchestra' (1930 to 1934) Order No .: 15009
In 1934, Oskar Joost receives an exclusive contract with the Deutsche Grammophon Gesellschaft. For the company, this may have been the most lucrative contract for a long time, because the orchestra from the EdenHotel has become nationwide known and popular thanks to numerous radio and film engagements. For the orchestra conductor, the contract with the most traditional German record company signifies another major prestige gain. For two years, Oskar Joost plates are still offered under the low-priced brown label at 1.50 Reichsmark, then, around the middle of 1936, they receive only the fifty pennies more expensive red label

Despite the price increase, sell the fragile shellac plates in enormous quantities. Between four and six new titles are launched monthly. In addition, the orchestra also provides the Austrian and Scandinavian market with recordings. Especially in Denmark the orchestra Oskar Joost is very popular thanks to regular guest appearances in the Copenhagen 'Cabaret National Scala'. In Berlin the 'FeminaBar' becomes more and more a musical hub for the orchestra. The Femina is a state-of-the-art dance hall with four dance floors, which are simultaneously played by at least four prominent orchestras. 225 table telephones and a specially installed Saal-Rohrpost make it easier to bond between the sexes.

Regularly big stage shows take place. There is also a self-service restaurant, a grill restaurant and a Schoppenstube all with regularly changing musical attractions. Oskar Joost and his fifteen musicians are the attraction in the Grand Ballroom. An advance notice of the coming appearance is sufficient to provide for a sold-out house at Weinzwang and costs of at least five Reichsmark per bottle a not-so-cheap pleasure (see also: Knud Wolfram: dance floors and entertainment palaces, published in Edition Hentrich). In 1938, the Oskar JoostOrchester recorded a veritable star appearance in the Luis Trenker film 'Liebesbriefe aus dem Engadin', and the orchestra Oskar Joost also plays regularly on board the great luxury liners that connect Europe and the USA. The chapel is in demand like never before, but at the peak of your career, it's all over. On September 1, 1939, the Second World War breaks out. Oskar Joost, originally nationally recruited, volunteers and goes to the rank of first lieutenant to the military.

The orchestra continues to exist and under the direction of saxophonist Rudi Juckelandt even makes a number of other recordings. At the beginning of June 1941, the press reports the death of Oskar Joost. In large mourning announcements, the Deutsche Grammophon Gesellschaft announces that Oskar Joost has fallen in the war for 'Führer und Vaterland', but this is a hoax. Lung cancer has become a disaster for the bandleader. Joost, a heavy smoker, had been admitted to the Berlin Charite with respiratory problems, but even such a recognized medical capacity as the well-known Professor Sauerbruch could not help him anymore.

On May 29, 1941, Oskar Joost dies in the Charita and with him one of the most glamorous chapters in the history of German dance orchestras.
Jens Uwe Völmecke
google translation 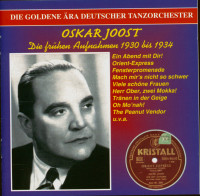