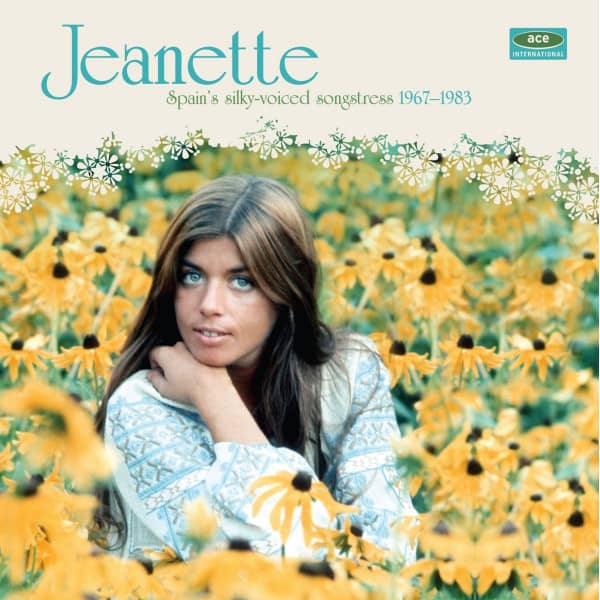 (Ace Records) 23 tracks
Softness was not a common feature of mid-century Spanish pop. Even in their ballads, Spain’s top singers such as Rocio Durcal, Massiel, Encarnita Polo, Marisol and Karina favoured a fiery vocal style that fluctuated between deep and shrill. Jeanette wasn’t Spanish by birth; she was born in London in 1951 and spent her early years in Chicago and Los Angeles. But it was only a few years after moving to Barcelona that she scored a #1 record with her band Pic-Nic, establishing a firm footing in the Spanish music world that would span three decades.

Jeanette’s hushed, languid voice seemed almost revolutionary in 60s Spain. In the quiet of her voice was real strength and sincerity. It was free of affectation and completely at ease. In Japan, Jeanette’s voice earned her the nickname “whispering Lolita” and she shares a vocal style with French stars Jane Birkin and France Gall, who built careers around the delicacy of their voices. But unlike her French contemporaries, Jeanette eschewed the gender-conforming expectations placed upon female pop singers in the 1960s. She embraced a far more DIY ethos, teaching herself the guitar, writing songs and leading her band Pic-Nic to the top of the charts with her self-penned ‘Callate Niña’ in 1967.

Soon after the demise of Pic-Nic, Jeanette re-emerged as a solo artist, replacing her quiet folk-pop with grand, heart-melting ballads, exquisitely produced, arranged and written by some of the most skilled music-makers from Spain, Argentina and France, with the soft, cushiony melodies set to the dreamiest and most soothing of backdrops. Given the exceptionally high quality of her songs and productions, it’s surprising that she continues to remain mostly under the radar outside of Spain.

A quick internet search will result in plenty of Spanish compilations dedicated to Jeanette’s most well-known material, but the packaging has always been lacking, with no accompanying biographical info or photos. To bring Jeanette’s music to a wider audience via a proper compilation is an idea that has been 20 years in the making. To do so with the blessing and assistance of Jeanette herself, and with liner notes by writer, radio presenter and Jeanette expert Gaylord Fields, means that this remarkable artist is finally given the praise, respect and recognition she deserves.