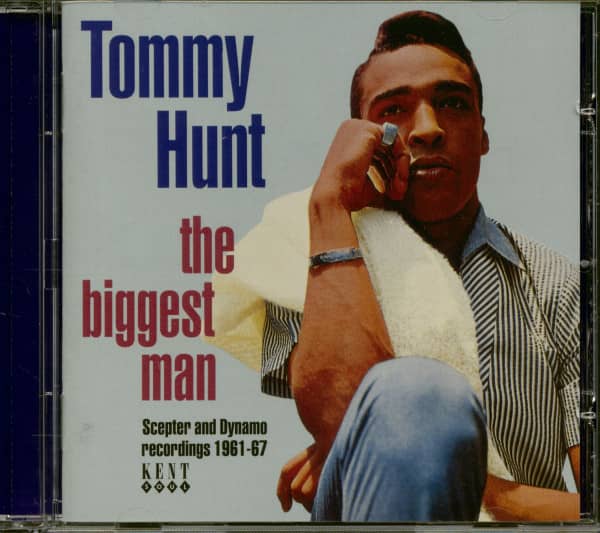 Tommy Hunt has one hell of a reputation: renowned for his deeply rich and powerful voice-.-his sharp, hip and downright impossible dance routines-.-his spellbinding charisma-.-and his smooth way with the women. Throughout his long and fruitful career, he's worked in the US, Europe and the Middle East, recording an incredible repertoire throughout his travels from one continent to another. And though he never seduced the masses, he's beloved by the UK's Northern Soul fraternity, and is a much-cherished name on any soul weekender line-up.

Hunts resum?©has grown at a steady rate throughout the years, having recorded for such labels as Chance, Sabre, Chess, Dynamo, Scepter, Atlantic, Capitol, Polydor, Pye and Spark. He worked with top New York producers and writers Leiber & Stoller, Luther Dixon, Teacho Wiltshire, Bacharach & David, Jerry Williams, Bert Keyes and Stan Green. And, in 1996 he was awarded a presitigious Rhythm and Blues society award in Los Angeles for his solo career and his early work with the Flamingos.

Now that you've got the low down on this soul star, take a look at the track listing on THE BIGGEST MAN. This solid 29-tracker packs most of Hunt's US solo recordings for Scepter/Wand, including the previously unissued dance track False Alarm , as well as a stock of rare sides. But before you skip to the newly issued and scarce tracks, stop at I Just Don't Know What To Do With Myself . As sleevenote writer Steve Armitage rightly says: "It is a MAGNIFICENT tour-de-force". This number shows off Hunter, producers Leiber & Stoller and writer Bacharach at the collective height of their powers.

But there are still more tracks not included in this macro look at Hunt's 60s releases, the heyday of this soulster's career. Compiler Ady Croasdell has served up a hearty 79 minutes and 30 seconds, but leaves you thirsty for more...and believe me there is more. Keep your eyes peeled for more information on Tommy's appearances on Kent.