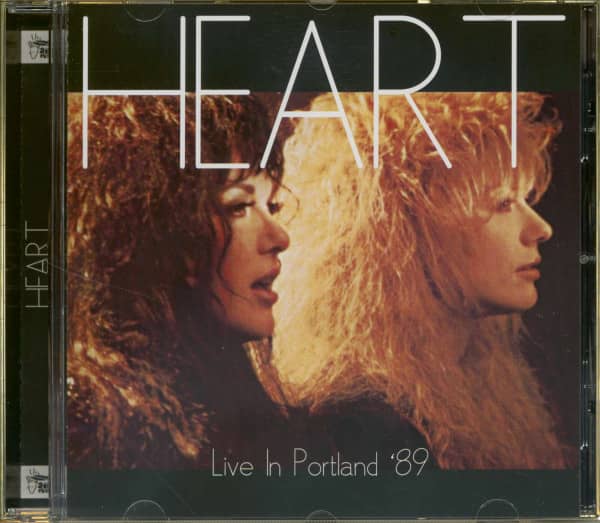 At the time of this May 12, 1989 performance, recorded for broadcast on syndicated radio, Heart were at their commercial peak, following their 1985 #1 self-titled comeback album and 1987's #2 charter Bad Animals. This 75-minute disc features performances of the #1 hits "Alone" and "These Dreams," as well as '70s favorites like "Barracuda" and "Dreamboat Annie," along with a cover of Led Zeppelin's "Rock and Roll" as the finale.

Learn more about HEARTS
Heart After they established themselves as one of the top American hard rock bands of the late... more
Close menu
"HEARTS"

After they established themselves as one of the top American hard rock bands of the late 1970s, the first half of the following decade was a tough time for Heart. Their albums in 1982 (Private Audition) and 1983 (Passionworks) failed to reach the Top Twenty, and they failed to score a big hit single between 1981 and 1984. After moving to Capitol Records, however, they came roaring back with a #1 album in 1985 with the simply titled Heart. At the time the Portland, Oregon performances on this CD were recorded at the Portland Coliseum for FM broadcast (airing on syndicated radio on May 12, 1989), they were as popular as they'd ever be, especially after their 1987 follow-up Bad Animals reached #2. As the spoken intro "Never" acknowledges, "Sometimes when we play in either Portland or in Seattle, we tend to feel a little bit like the house band, you know. It's true. Anyway, it feels great, it really does.

It's very nice to get back to the 'Left Coast': God's country"—Seattle being the base of the Wilson sisters, and Portland being just a few hours drive south down the US west coast. The seventeen songs on this disc feature many of the most popular songs from throughout the first fifteen years or so of Heart's recording career. The material stretches back to their first Top Forty hit, 1976's "Crazy on You," as well as their '70s hits "Barracuda," "Straight On," and "Dreamboat Annie." More emphasis was placed on their recent comeback smashes, however, including the #1 hits "Alone" and "These Dreams," as well as the Top Ten singles "Who Will You Run To" and "Nothin' At All." The band had changed since the 1970s; Howard Leese was still on guitar and keyboards, but Mark Andes, once of Spirit and Firefall, was handling bass.

But Heart stalwarts Ann and Nancy Wilson remained the focus as singers and multi-instrumentalists who wrote much of the band's repertoire. Reflecting on their comeback to Sylvie Simmons in Creem magazine in 1987, Ann Wilson remarked, "It got to a point where we could just tour and tour and tour our heads off, and break our backs, and still not get anywhere. We were spinning our wheels and it was really frustrating. So we just thought, well, let's rethink this and do whatever it takes to get ourselves back in motion again! It was no longer worthwhile to be just stuck in the mud. I don't know, it's hard to describe what actually turned the key to make us do what was necessary to get going again—I think it was just frustration and boredom.

And fear." Added Leese, "We made wholesale changes in our business setup; and just got our noses down to the grindstone and made better music." Among those changes was a willingness to use songwriters outside of the band for material, such as Diane Warren, who wrote "Who Will I Run To," and Elton John lyricist Bernie Taupin, who co-wrote "These Dreams" with Martin Page. In collaboration with bandmates and other writers, however, the Wilson sisters continued to write some of the late-'80s songs heard on this broadcast, such as the title track from "Bad Animals." In concert, though, old favorites like "Barracuda" were retained to great enthusiasm, despite Ann Wilson's admission in a 1982 Sounds article that "I just can't stand that song! It's weird to say, because I wrote it all by myself, but I really don't like it. It's too late to go to everyone's house and go 'don't listen to this again' though. It's weird.

The elusive butterfly of art..." There was also room for just a few items that weren't either big hits or especially recent. "How Can I Refuse" just missed the Top Forty in 1983; Led Zeppelin's "Rock and Roll," the last number on this broadcast (actually opening with a snippet of Little Richard's "Keep a Knockin'"), had been covered by Heart in concert for years. "Bebe Le Strange" was the title track of their 1980 album, which Ann Wilson cited as her favorite Heart LP in her 1982 Sounds interview, "just because we had the biggest hand in it and because I think the songs were the best." Heart kept their winning streak going on 1990's Top Three album Brigade, with the following year's Rock The House Live! concentrating on concert versions of Brigade songs. In contrast, this broadcast offered a wide sampling of favorites going back to the mid-1970s, documenting Heart as they sounded onstage during what was arguably their commercial peak.