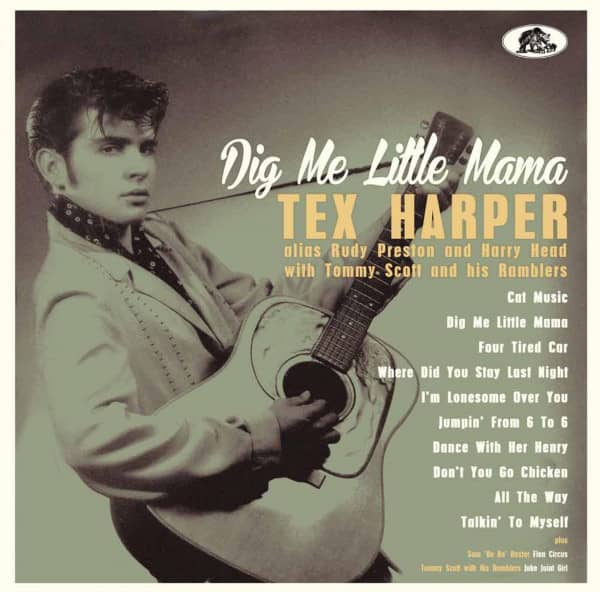 1-LP (10”), total number of tracks: 12. Total playing time 26:35 minutes.
‘’The ‘Cat Music’ within this album is the nucleus of rockabilly and features: Tex Harper aka Rudy Preston and Harry Head with Tommy Scott and his Ramblers. Musically it is an amazing fusion of Hillbilly, Western Swing, a touch of Rhythm ‘n’ Blues bonded together with strong influences from Bill Haley’’.
• Recorded between 1954 and 1961.
• Tex Harper performed Rockabilly fusioned with Hillybilly, Western Swing, and a shot of Rhythm ‘n’ Blues.
• A fancy musical genre known as ‘Cat Music’, basically an amalgamation of Country music and the beat of Rock ‘n’ Roll.
• Music that cannot fail to move you. Get on the dancefloor!
• Gatefold sleeve. 10” LP comes with liner notes by Martin Hawkins and a discography by Richard Weize.
Our musical journey commences in 1954 and the musical world for songs with a rock beat was in its infancy, and Elvis Presley was still a regional artist and Bill Haley in prominence ruled supreme! The recordings on this album are an amalgamation of country and the big beat of rock ‘n’ roll, and this new hybrid of music would become known as ‘Cat Music’.
The main point is to clear up the distinction of the artists featured on this 12 track album. Musically the band was under the direction of Tommy Scott and His Ramblers, and Freddie Jean Harper to give him his full name was employed as the vocalist. Harper recorded under several alter-egos: Tex Harper, Rudy Preston and Harry Head and he is the main featured singer on ten of the songs and is the rhythm guitarist, pianist, or drummer on eight tracks. The two side closing bonus songs feature vocals by Sam ‘Bo Bo’ Baxter and Tommy Scott.
Harper musically is something exceptional and each and every performance has ‘hit’ written all over them! Perhaps due to him being one of the ground breaking artists with the new ‘Cat Music’, being signed to the notorious Four Star label or the use of other performing names, something prevented his musical accreditation.
This 10 inch album although hillbilly rooted transcends hillbilly music, engulfs rockabilly and moves into the rock ‘n’ roll genre, and as Rudy Preston you hear the Presley influence albeit from the next decade. The title track of this album Dig Me Pretty Mama and Cat Music (1954) are something special and cannot fail to move you. The up-tempo dance rhythm blends hillbilly and rock ‘n’ roll tempos together, and both songs are propelled along by an incendiary band and embellished with Harper’s powerful larynx. Staying with 4 Star recordings Jumpin' From 6 To 6’and Dance With Her Henry (1955), bring to your ears musical versatility. Jumpin’ is exactly that, hot up-tempo hillbilly, while the latter reworks the Rhythm ‘n’ Blues’ hit southern style. The 4 Star’recordings feature guitar, steel guitar, fiddle, piano and drums and Dance With Her Henry includes coloured backing vocalists and musicians.
Scott owned the Katona label and the recordings for the label cover the years 1957 to 1961 and offer a variety of style. In 1957 Harper became Rudy Preston and was frantically singing about his personal qualities, his tired none loving girl and his clapped out automobile Four Tired Car, a western-swing meets rockabilly combination ditty punctuated with a short but rocking guitar solo. Don’t You Go Chicken is rural in feel, a mid-tempo jive number with unusual guitar riffs, and is perhaps known to many through Ray Campi’s version? We return to the Katona recordings on the flip-side. To close side one is the first of two bonus recordings, and Sam ‘Bo Bo’ Baxter is the featured vocalist on the guitar lead strolling, Flea Circus.
Moving into the new decade, Harper was renamed for the final time and became Harry Head. The new persona in 1961 again recorded for Scott’s Katona label, All The Way and Talkin' To Myself are directly aimed at the pop market, both sides have a fuller sound, due to the inclusion of session backing vocalists, are gentle on the ear and the sort of song you could sing easily to yourself. Somewhere along the way during that year they signed a deal with King Records resulting in two strong sides, Where Did You Stay Last Night, which is a pop rocker with a Bob Luman feel to it. The flip side, I’m Lonesome Over You, its sweet due to the use of backing vocalist but has a bluesy melancholy vocal and elicits an eerie sound.
The album closes with a bonus Katona recording, Juke Joint Girl issued under the name Tommy Scott with His Ramblers, although recorded in 1957, the song has an earlier feel, a rolling honky tonk piano, and instrumental break coming from the fiddle, Scott is the featured vocalist and he sings in  a lackadaisical style.
Bear Family as always have on this 100 gram album a strong and vibrant sound, and the album sleeve contains a discography from Richard Weize and an in-depth story and interview held by Martin Hawkins.
Mark Armstrong Bühl, Germany

The hero of this album of rocking music is a young man named Freddie Harper who, quite literally, ran away with the circus. Actually, with Tommy Scott's Medicine Show, the last of the original tent shows, groups of performers who criss-crossed rural America performing under canvas, or in school houses, or anyplace they could display their array of talents and tum a dollar in exchange for entertainment and patent medicines. The key was variety and novelty — music, comedy, circus acts, current fads. So when rock 'n' roll first emerged, country singer Freddie Harper became 'Tex' Harper singing the latest 'cat music' as a kind of bearded lady sideshow for the younger crowd. Than he was re-named Rudy Preston, imitating Elvis Presley in name as well as style. Finally he performed as Harry Head. For a dozen years, he was the lead singer and multi-instrumentalist with Scott's show.

Our man's birth was registered on 17 August 1936 as Freddie Jean Harper, in Jacksonville, Cherokee County, Texas. His father was 31 year old Charlie Childress Harper from Angelina, Texas and his mother was Nancy Lorene Repp, usually known as 'Flossie,' born in Oklahoma. She was 21 when Freddie arrived to join his four year old brother Oscar and his two year old sister Opal. Freddie attended Jacksonville High School where he was pictured in the school's Yearbook, 'The Indian,' during eighth grade, looking just that little bit different, more knowing, rebellious maybe, than the other kids. Freddie's early interest in music was fuelled when his sister Opal met and married an older local man, James Byron Paris.

He was a songwriting associate of the pioneering honky tank singer Al Dexter, also from Jacksonville, who had recently had a big hit with Pistol Packin' Mama which Paris may or may not have written. Paris wrote many other honky tank and popular songs and Freddie later said, "back when 1 was a kid my musical influences had nothing to do with other singers, but with my brother-in-law, J. B. Paris, who was a big influence on me learning to play and write music. East Texas was always a hot bed of entertainment. All of the 'Louisiana Hayride' shows that would come through town would come to the Tomato Bowl, our football stadium. 1 would always get out there and sell cold drinks. One of my best customers was singer T. Texas Tyler. All the other kids knew I sang, and they would say, 'Hey Freddie, get up and sing one'. Finally, when I was sixteen or seventeen, Tyler asked me if I would come on his show. 1 did a take-off on him doing Remember Me. He nicknamed me 'Tex' that night." Freddie also listened to the Grand Ole Opry radio show and kept up with the exploits of musicians like Stringbean, remembering, "when the Tommy Scott Show came through they had Stringbean [with them]."

Freddie went to see the Tommy Scott show one day in 1954. By now he was 18 and out of school, looking for something to do with his life. His parents had divorced, and his mother married Curtis Austin from Fort Worth, now in Jacksonville. Freddie didn't see a lot to keep him home, and said he asked Scott, "what does it take to get in this business? Tommy found out I was a singer and he got to talking with me. He started telling me it takes a lot of work, Got to listen to whoever is telling you what to do. So, Tommy Scott talked to my mother and my stepdad.

I wound up on the Scott travelling show, and 1 jumped on the train the first part of the year and stayed for twelve years." The music paper 'Billboard' confirmed in April 1955: "Tommy Scott, currently touring Arizona with his road show, is featuring a new singer in the person of Freddy[sic] Harper, of Jacksonville, Texas."

... are there any sounfiles of that guy?