Lester Flatt's RCA recordings are among the finest and most underrated recordings in Bluegrass music. For many years, Lester had been unhappy with Flatt & Scruggs' direction, so after the act dissolved in 1968, he reverted to his first love, traditional music. He recruited a top notch band that included among others Roland White, Marty Stuart, Bobby Osborne, and Josh Graves, and went back to playing the small auditoriums and venues that he and Earl had played at the start of their career. It was a sweet return to basics in every sense. This 6-CD boxed set contains all of Lester's recordings for Columbia and RCA between 1969 and 1974, including his duets with Mac Wiseman, as well as 18 Flatt & Scruggs recordings that could not be located earlier. Here is the complete Vanderbilt Concert from March 19, 1974, with Bill Monroe. The box contains a total of 148 songs.

Learn more about Lester Flatt
LESTER FLATT FLATT ON VICTOR, PLUS ... It was the late '60s and Lester Flatt, like many... more
Close menu
"Lester Flatt" 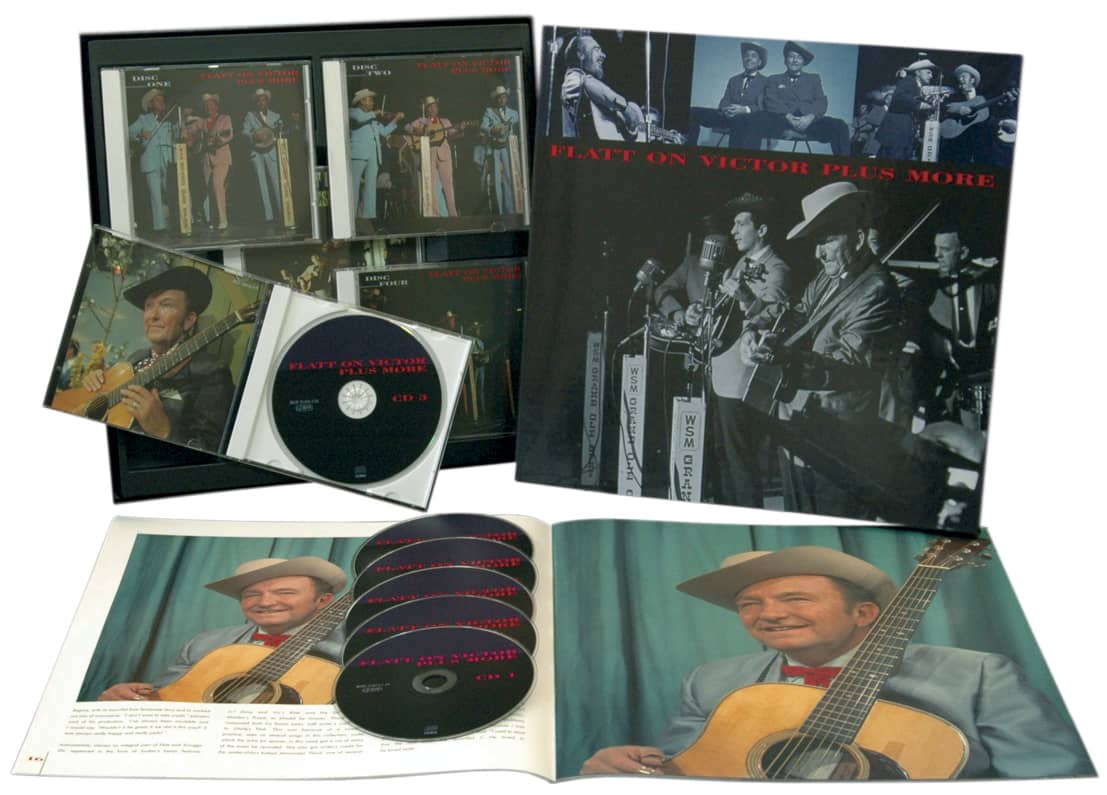 It was the late '60s and Lester Flatt, like many Americans, had come to a crossroad. His more than 20-year partnership with Earl Scruggs had been crumbling for many months. It was clear that they had drifted apart, musically and personally. Flatt had earned stardom as a great vocalist, unmatched stage personality and bluegrass-country loyalist. He was at odds with Scruggs, the banjo master who had leap-frogged the competition to bring the old minstrel-show instrument into post-war prominence. Their musical and personal division had deeper roots, it seems now. That is, their differences reflected the country's Vietnam-era generational split. Both men came from the country, but Scruggs, who had teen-age sons, was leaning toward the music and style of sixties counterculture. Meanwhile, Flatt, at 55 almost 10 years older, clung to the traditional sounds and country ways that had worked well for the duo for so long.

The upheaval and the split that finally occurred in February 1969  carried huge significance for music fans. The very names Lester Flatt and Earl Scruggs embodied authentic country twang and had for a generation. And their image was among the most familiar of any tradition-based act in American music history: when the Country Music Foundation issued the landmark 1985 volume 'Country: The Music And The Musicians,' the cover shot of Lester and Earl and their Foggy Mountain Boys band served as shorthand for the music's long history. In retrospect, theirs was an unusual duo. It's rare that a lead singer and a lead instrumentalist, instead of two singers, make up a popular act. But their years of success paid clear tribute to the specific alchemy formed by Scruggs' instrumental prowess and Flatt's warm vocal presence, songwriting and MC work. Thirty years later, friends and associates of Flatt remember that his down-home ways of singing and entertaining never slipped because they so purely represented the man himself. "It's trite to put it this way, but they broke the mold when they made Lester," his old friend Mac Wiseman told me in 1999. "He was a mountain man and he had mountain ways." Flatt's singing echoed his country background. His voice, deeper than most bluegrass singers', conveyed the heart of songs with a gently insinuating quality, carried by little gliding runs and downward turns. A slight sibilance and his habit of sometimes sliding up to pitch just added to the distinctiveness of his style. Flatt also used the ghost of a yodel at the ends of phrases and a deeply country way of saying his words. "He had the best phrasing," said Bob Johnston, who produced Flatt and Scruggs' last sessions as well as a Flatt solo LP. "And he never thought about it. He would hold that guitar up and he had a big smile on his face and he had the love of the life." Flatt's steady rhythm guitar playing featured one of the few country instrumental licks named after one person, the 'Lester Flatt G-run.' The quick, thumb-driven bass figure he developed to keep up with Bill Monroe's flying mandolin became one of the signature sounds of bluegrass. And his strong, heart-direct songs fill many pages in the bluegrass-standard songbook. But it is on Flatt's personality that his legend may rest most firmly. "In addition to his singing, one of his greatest attributes was his MC work," Wiseman said. "He didn't talk down to people and he didn't talk up to people; he was just himself. He didn't have to work at it." Recalled Vic Jordan, who took over banjo duties with Flatt after the breakup: "When he talked and when he sang and the way he acted, that's who he was."

So it was that in the '60s, when everything was changing, Flatt did not. To judge by photographs and recordings through the years, Flatt seemed to have come on the national scene in 1944, when he joined Bill Monroe, fully formed as a musician and human being. Even his looks — somehow both homely and handsome, with a twist of a mouth and the eyes of a timeless mountain spirit — stayed much the same through the years. Scruggs, on the other hand, took a different road to remaining true to himself in changing times. His sons were deeply immersed in rock-era sounds, particularly those of Bob Dylan. Scruggs enjoyed picking around the house with his boys and the music they played together began to affect the duo's sound. Flatt and Scruggs albums such as 'Folk Songs Of Our Land' and 'Hard Traveling' had already started reflecting the music of the early '60s folk boom. As the decade moved on and producer Johnston took over supervision of the duo's albums, they came to contain songs by counterculture types such as Donovan, Pete Seeger and Buffy Ste. Marie, as well as a heaping helping of Dylan tunes. By almost all accounts, Flatt disliked the new direction. "I feel he didn't like the Dylan stuff," said Josh Graves, who played with the duo for 14 years and then worked with both men in their solo careers. "Some of it he liked and some of it he didn't like. But he did it anyway."

Flatt put it more bluntly to journalist Don Rhodes, whose extensive, revelatory 'Pickin'' magazine interview with Flatt came just months before the singer died on May 11, 1979. "Recording those Bob Dylan songs has as much to do with me wanting to quit doing records with Scruggs as anything," Flatt told Rhodes. (Personal and business differences also played a role in the breakup, as court filings showed through much of 1969. A settlement reached late that year ended the suits, but meant that neither could use the Foggy Mountain Boys name for his band.) Even though late-period Flatt and Scruggs albums such as 'Changing Times' and 'Nashville Airplane' consistently sold well, Flatt reportedly viewed the music as betrayal of their long-time fans. Scruggs has consistently declined chances to talk about past differences. But he agreed to talk about his longtime partner's contributions to music and entertainment. "We had the greatest association with each other and I thought he was one of the best showmen of all," Scruggs told me in September 1999, protesting that his words couldn't do justice to his feelings for Flatt. "He was a good singer and a good MC and he came off well on stage." The music included here shows a clear progression: from the last days  of Flatt and Scruggs, through an experimental last fling with Columbia with Flatt as a soloist, through a return to a  mainstream bluegrass sound on RCA and heralded collaborations with 1940s singing partners Mac Wiseman and Bill Monroe. (Flatt went on to record for a variety of labels, including Canaan, CMH and Flying Fish after leaving RCA in the mid-'70s.)

For the most part, the lamp of history has focused on the duo. That's understandable. The names Flatt and Scruggs still go together: like Abbott and Costello, like Lennon and McCartney, as basic a combo as bacon and eggs. "No one ever mentioned the word 'Lester;' no one ever mentioned Earl: It was always just Flatt and Scruggs," recalled Johnston, the producer who played such a controversial role in their careers. If one partner has been singled out, it has usually been Scruggs. (The esteemed 'Encyclopedia Of Southern Culture' has a separate entry for Scruggs, in which Flatt is mentioned.) That's understandable too. Scruggs has outlived his former partner by many years. And his contributions as an instrumentalist are more easily defined and traced than are Flatt's as a singer. The music on this set offers the first opportunity in many years for a full-fledged, separate look at Flatt as a person and a corresponding listen to him as a musician whose influence has been understated.

As a principal of the Nashville Bluegrass Band, Alan O'Bryant has been a key player in the revival of the kind of traditional bluegrass pioneered by Bill Monroe and Flatt and Scruggs. "I was a big fan of Lester's and always considered his singing to be the definitive version of a lot of the stuff that I heard: a lot of the bluegrass songs, a lot of the standards, even songs that I later found out that were covers," said O'Bryant, who first heard Flatt perform when O'Bryant was a North Carolina teenager in the early '70s. "And starting out, that was some of my first impression of how people were supposed to act when they were on stage. Lester was real comfortable and had a way of winning people over that wasn't too formal. I think that general attitude pervades our presentation until today."

As the millennium closed, there were plenty of people around who played roles in Flatt's life in the years 1966 until 1974, when he sang and played on the recordings in this set. In separate interviews with Flatt's friends and associates, a picture emerged of the singer in the late '60s and early '70s as genial, often full of fun, devoted to music and confident in his professionalism. After his decades of stardom, Flatt never got "above his raisin'," even in the jobs he agreed to play. "We did some drive-in theaters when I was with Lester," Vic Jordan said. "You'd play on top of the concessions stand. You'd have a couple of microphones and they'd pipe the sound right into the speakers in people's cars. Instead of applauding, the people'd blow their horns. That was an experience I never had with anyone else."