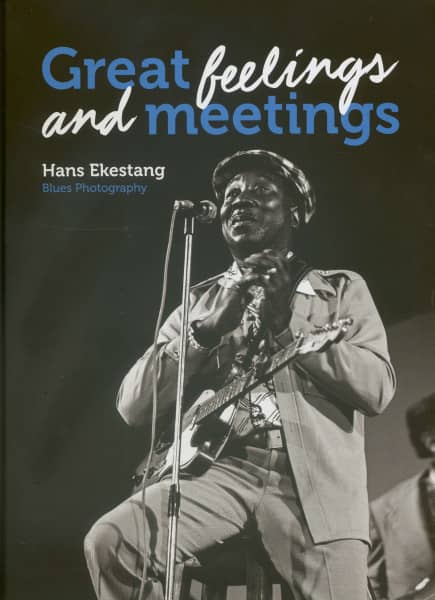 English, Hardcover, 192 pages
HIS LIFE'S MISSION IS TO CAPTURE THOSE MAGIC MOMENTS OF EXPRESSION by the world's most respected blues and soul performers. Swedish blues lover Hans Ekestang spent some fifty years of his life as a professional photographer hunting for those magic Blues Shots... During the years, he met most of the famous blues and R&B artists from the last century. By always treating them with respect, Ekestang made the blues & soul legends feel relaxed, meanwhile he achieved just the right atmosphere he was looking for...
Ekestang had his first photo published in 1971 in Swedish blues magazine Jefferson, today the longest running blues magazine in the world. Soon after, in 1973, he was published in Melody Maker and there-after in many magazines around the world. Still, today Ekestang contributes regularly to Jefferson and other magazines and music books. He is still active and holds regular exhibitions with his blues photos.
Many of them today considered art in their own right.

4 FOREWORD
Hans Ekestang
IT'S WITH GREAT PLEASURE I write these lines about world class photograher Hans Ekestang, whose contributions to the blues, and to the Swedish blues magazine Jefferson in particular, have been tremendous. A documentary blues photo-book by Hans has now — long awaited by us blues lovers! — come true, containing some of his legendary blues pictures. Enjoy! Born in 1952, Hans grew up in Solberga in Hagersten, on the south side of Stockholm, Sweden. Music caught his interest at an early age. As a little boy he heard rhythm'n'blues, and was hooked up with artists like Chuck Berry, Little Richard and Fats Domino. A bit later, in the beginning of the 6o's, several English bands appeared on the music scene, playing rock music with a blues feeling; bands such as The Rolling Stones and The Yardbirds. They made a strong impression on young Hans, as did English "blues father" John Mayall. Hans also began to discover the original, "black" blues, and found an early favourite in Muddy Waters.

In the municipal music school he learned how to play the guitar. Already at the age of II he performed solo on stage in his ordinary school, "Kampetorpsskolan", and he also performed with the municipal music school's guitar orchestra. Hans didn't become a professional guitarist, but has continued to play. His focus was growing in another direction: photography. This development was parallel to his rapidly evolving interest in the blues music. After attending a couple of photo courses in the 6o's, Hans went to the hairdres-ser, letting his long, trendy mods-hair be cut off. He had decided to become a photo-grapher, and therefore needed to look presentable. What he had in mind was an employment with highly acknowleded photographer K.W. Gullers, who had his well-known Gullers Studio in Norra Kungstornet in the Norrmalm area of Stockholm.

The proper short-cut 19 year old youngster made a good impression and was hired. To begin with, as an errand-boy and copyist. Soon enough, however, he was trusted by Gullers to do more challenging things: or how about, for instance, to take photos of Formula 1 races with world famous Swedish driver Ronnie Peterson in Anderstorp in 1973! Things like that suited Hans very well, and he stayed with Gullers for eight years, until 1979. He learned a lot of things, and became a highly skilled press photo-grapher, with a specialty in "catching the moment".

Gullers fully recognized his talent and has described him to have "the unique competence to capture the moment in the flight" and that Hans knew the art of "getting to the frontline and even in the most difficult situations be able to take first class press photos ... a capacity which is extremely rare".