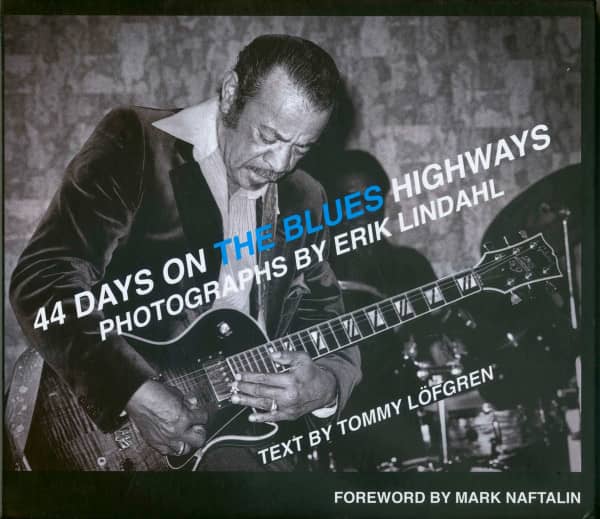 Please inform me as soon as the product is available again.
$47.45 *

November 1980 four bluesfans from Sweden set out for a journey that turned out to be an adventure if something. The first stop was San Francisco. From there they should continue and visit blues clubs in a large part of USA. The final stop was Chicago, where they arrived the last days of 1980. By that time they had been on the road 38 days.

All four was in one way or the other engaged in Swedish Blues Association and Jefferson magazine, established 1968 and still published by SBA. It is the world´s oldest still active blues journal. The aim was to take pictures and do interviews for the magazine. It was hectic days and nights most of the time.

40 years have passed since this fantastic journey. Now Erik Lindahl has run through his collection of photos and present some of them in this book, titled 44 DAYS ON THE BLUES HIGHWAYS. Tommy Löfgren has, from notes made during the trip and artifacts collected, written texts that accompanies the photos.

I LOVE THIS BOOK

In the last week of November, 1980, the eminent Swedish photographer Erik Lindahl visited the San Francisco Bay Area with his traveling companions Tommy Lofgren, Jorgen Sandin and Lasse Linder. Seeking blues, they found their way to the "Blue Monday Party" at the Sleeping Lady Cafe in Fairfax, and to the "Blue Tuesday Party" at Mooney's Irish Pub in San Francisco's North Beach. As the host of the shows, and the bandleader, I was pleased to greet these likeable blues fans from abroad, and we chatted a bit between sets. Their mission at the time was to interview and photograph blues artists for the Swedish blues journal Jefferson, where Tommy was the editor and Erik a frequent contributor of photos.

To that end, they were on the first leg of a momentous journey from the Bay Area on to Los Angeles, then across the Southwest to various towns in Texas, Louisiana and Mississippi, and up through Memphis and St. Louis to Chicago, the home of the blues. While they were with us, Erik took some pictures, and I gave him my Post Office Box address on a bar napkin. Years went by. Then, on a summer day in 2019, a scan of "the napkin" arrived, attached to an email from Tommy concerning a book he was working on with Erik. With text by Tommy Lofgren, and dedicated to the memory of Jorgen Sandin and Lasse Linder (and also to that of Paul "Lil' Buck" Senegal), 44 Days On The _Blues Highways is Erik Lindahl's second book of photographs.

A pictorial chronicle of that 1980 trip, it follows these intrepid travelers down uncounted miles of highways--and byways, as well, to be sure: city streets and avenues, county roads and country lanes and who knows where-all else? (After "asking locals"--for example--they found the legendary Creole accordion player Alphonse "Boi Sec" Ardoin's farm at the dead end of a gravel road, off Evangeline Parish Road 104 near Lafayette, Louisiana.) The next email brought a PDF of the work-in-progress. And so I started to click, and this amazing book unfolded before me. First, we see a map of the entire Grand Tour in a dotted-line schematic reminiscent of a heavenly constellation as shown in the astronomy guides that transfixed us in our younger years--which is appropriate, in a way, for the odyssey it depicts was without question a sojourn among the stars. As we continue, we are drawn inexorably, magnetically into a pageant of 44 days, a glimmer, a glimpse into the lives of certain people at a certain time, blues and zydeco and Tex-Mex people with their families and friends, their homes and yards and cars, their trophies and awards, their squeeze-boxes, saxes and countless guitars, their street clothes and their stage clothes, their nightspots inside and out, their world ... This is a personal story. And one can see that the subjects of the book welcomed their inquisitive visitors from across the sea with an abiding warmth. It is in the smiles.

The photographer and his team visited 22 municipalities, including the second and third largest cities in the nation, Los Angeles and Chicago (combined population 5,971,922). On the other end of the population spectrum, they got together with Jessie Mae Hemphill at her home in Senatobia, Mississippi (pop. 5,010), near where she was born in the North Mississippi hill country; heard the Mamou Cajun Band during a Saturday-morning radio broadcast from Fred's Lounge in Mamou, Louisiana, "The Cajun Music Capitol of the World" (pop. 3,194); and, on Christmas Day, attended Big Jack Johnson's performance at Miss Applewhite's Place in Glendora, Mississippi (pop. 220). (Figures from 1980 census.) In addition to Miss Applewhite's, the troupe hung out at Miss King's (in Baton Rouge), Peggy's Patio (in Memphis), Miss B's (in St. Louis), Ruby's Lounge (in East St. Louis, Illinois), Mary's Lounge (on Chicago's West Side), and (on the South Side) Florence's Lounge and Theresa's Lounge--to name a few of the 45 venues they visited at 18 points on the map.

And everywhere, Erik's wit and sense of humor shine through in his pictures, as do Tommy's in his text, which is so in the tone of what one imagines the experience of their relentless quest to have been as they encountered Ironing Board Sam and Good Rockin' Sam, Smilin' Bobby and High-way Man, Driftin' Charles Tyler and Whispering Smith, Dr. Wild Willie Moore--and so many more. (Over 100 musical artists are pictured in the book, including not only Big Jack Johnson, but also Big Joe Turner, Big Joe Williams, Big Jay McNeely, Big Mojo Elem, Big Daddy Hood, Big Smitty in San Antonio, and, in St. Louis, BigBadSmitty.) The themes of 44 Days On The Blues Highways are the narrative of the road, of course--the rhythm and pulse of the towns as they come--and the communal love and affection seen through Erik Lindahl's sensitive lens: for the friendly visitors bearing camera and notebook, and between and among the musical stars themselves (and those closest to them).

The predominant motif is the smile. This inspired work (it was Tommy Lofgren's idea) scintillates with good humor and bonhomie. It is an absolutely delightful presentation. One could not say enough good things about it. So personal and friendly, so downhome and homey, so inviting and welcoming, so warm and heartwarming and soulful and soul-satisfying. Hove it. I love this book. And I surely hope that you will enjoy it, too.