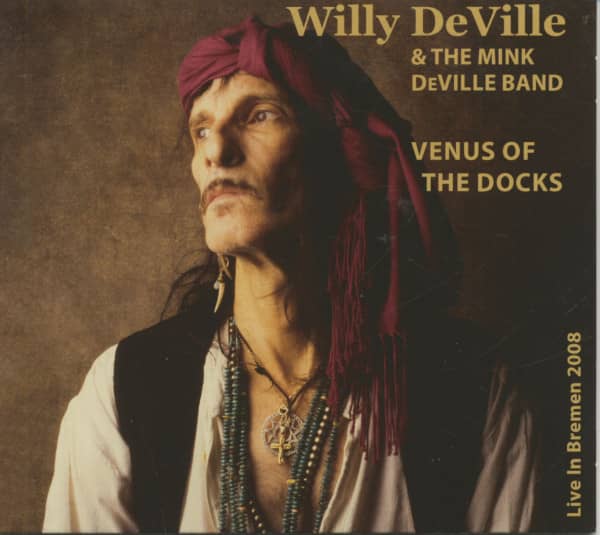 Willy DeVille, actually William Paul Borsey junior, was born on August 25, 1950 in Stamford, Connecticut. He had already married for the first time at the age of 17, and at 21 he went to London to find suitable musicians for a band. The search was unsuccessful, completely broke he returned to the USA. In 1974 he founded Mink DeVille in San Francisco. The band moved to New York and became the house band of the legendary CBGB's. Through the performances at CBGB, Mink DeVille began working with Jack Nitzsche in 1975, a producer who had already worked with Phil Spector , Neil Young and the Rolling Stones. With the hit Spanish Stroll, the band achieved its international breakthrough in 1977. Several albums followed, the critics cheered, but the broad success unfortunately failed to materialize.

The band Mink DeVille broke up, Willy DeVille moved to New Orleans and started his solo career. In 1987, his song Storybook Love, produced by Mark Knopfler, was nominated for an Academy Award for Best Film Score. Willy's records, however, always sold better in Europe than in his native America. There were times when Willy DeVille didn't even have a record deal in the U.S., while at the same time in Europe his Mariachi version of Hey! Joe was conquering the single charts. Irony of fate, especially for him, who embodied almost all American musical traditions in one person. His music was a mixture of rock, blues, doo-wop, Latin, Cajun, Creole, Tex-Mex and country. In 2007/2008 Willy DeVille recorded his last studio album with Pistola.

Willy went on tour once again with the Mink DeVille Band to promote the album live. On February 27, 2008 the tour stopped at Pier 2 in Bremen, Radio Bremen was there and recorded the concert. It was to be Willy's last tour, because just under a year later he went to the hospital in New York to be treated for hepatitis C. The doctors discovered that Willy had been infected. During an examination, doctors discovered a tumor in his pancreas. Willy DeVille died on August 6, 2009, a few days before his 59th birthday. In one of his last interviews he said: "I have a theory. I know that I'll sell much more records when I'm dead. It isn't very pleasant, but I have to get used to this idea death's there. I can feel it at the door. I'm not saying I'm going anywhere right away but I know it's coming." With this concert recording Willy DeVille's music lives on, his magic, his unique aura and his charisma can be felt again.