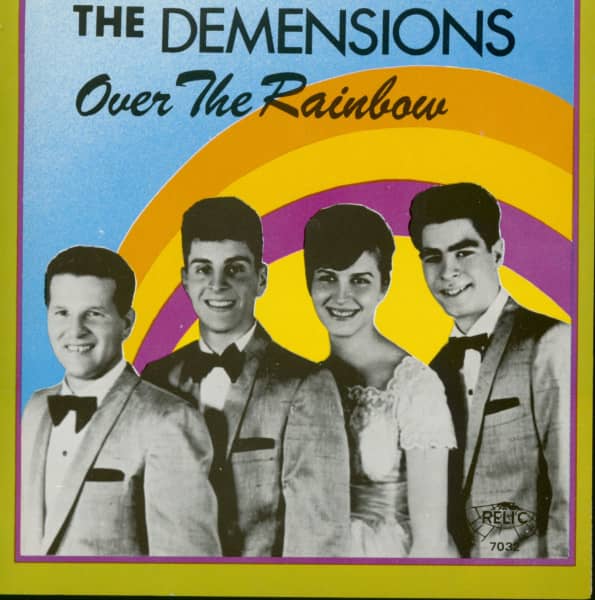 This article is deleted and can no longer be ordered!
Please inform me as soon as the product is available again.
P Secure bonuspoints now
Description
Learn more about The Demensions
Review 1
Description
(Relic) 16 tracks & ,- It was 1957-58 at Christopher Columbus High School in the Bronx where... more
Close menu

The Demensions: Over The Rainbow (CD)

(Relic) 16 tracks
& ,-
It was 1957-58 at Christopher Columbus High School in the Bronx where Lenny Del Giudice and Howie Margolin formed the nucleus of what was eventually to become the "Demensions." Under the guidance of one of their teachers, Jack Finestone, Lenny Dell (as he was soon called) sang lead and 2nd tenor, while Howie Margolin was the baritone and bass. The Bronx teens were members of the Melody Singers, the school choral group.

They soon began to sing with two other school choral group members, Charlie Peterson (1st tenor) and Marisa Martell', soprano (how many doo-wop groups contain sopranos?) The quartet practiced at many school affairs and, by the time they graduated in 1960, Lenny's dad, Lou, became their manager. (Mr. Del Giudice was a professional musician and was in the movie, "The Eddie Duchin Story.")

Howie Margolin coined the name "Demensions" because he thought his group was multi-dimensional or, as he said back then, "We had a lot of scope." The group spelled their name with an "e" rather than the customary"i" to catch the public's attention. In any case, they couldn't be confused with any other group as the "Demensions."
Len's dad, Lou, had played the famed Copacabana Nightclub in Manhattan with bandleader and Mohawk label topper, Irving Spice. He invited Spice to his home to hear the young group.
Spice, (who had issued the very first recordings by Dion on Mohawk), was immediately impressed and he signed the Demensions to a recording contract.

Lenny had his original arrangement of the standard, "Over the Rainbow," and a new song he and Howie wrote called "Nursery Rhyme Rock." They were putting the finishing touches on the songs to be recorded when Charlie announced he was leaving the group to go to college. Lenny, dumfounded, told his parents over dinner. "How about your Uncle Phil?," Mom chimed in, and the rest is history. Although Phil Del Giudice was twice the age of the other group members, he brought leadership and maturity to the Demensions.

Video von The Demensions - Over The Rainbow (CD)

Article properties: The Demensions: Over The Rainbow (CD)

Lenny Del Giudice came by his affection for vintage pop standards naturally. Dad Lou Del Giudice was a professional musician, his experience coming in handy when he assumed the managerial reins for his son's vocal group.

Lead singer Lenny and his pal, baritone/bass Howie Margolin, teamed up in 1957 at Columbus High in the Bronx. First tenor Charlie Peterson and soprano Marisa Martelli were fellow choral group members. The quartet went pro after graduation in 1960, calling themselves The Demensions (Margolin's idea). Lenny changed his surname to a compact Dell for show biz. Papa Lou had played at the Copa with Mohawk Records owner Irving Spice, greasing the wheels for a Mohawk contract.

Just before The Demensions' first Mohawk session, Peterson quit to attend college. Lenny's mom suggested replacing him with Phil Del Giudice - Lenny's uncle! Despite the sizable age gap, it worked out fine. The Demensions updated the immortal Over The Rainbow, written by Harold Arlen and lyricist Yip Harburg for Judy Garland to croon in the 1939 film classic 'The Wizard Of Oz' (the song won an Oscar). The Demensions and arranger Seymour Barab didn't do anything crazy with the beloved standard, giving it a smooth ballad interpretation with Spice leading the orchestra and leaving any up-tempo aspirations for the B-side, Lenny and Howie's Nursery Rhime Rock (as Laurie-distributed Mohawk misspelled it).

Released in May of 1960, Over The Rainbow gave The Demensions a hit their first time out, sailing to #16 pop that summer. The quartet stuck with a diet of MOR chestnuts on their next two Mohawk releases, Zing Went The Strings Of My Heart (rendered perkily up-tempo) and Ave Maria. Marisa wrote and fronted their last Mohawk outing, A Tear Fell. Spice sold their contract to Coral before 1961 was done. Over the next five years, Coral issued 11 singles and an LP, but only a remake of My Foolish Heart impacted the pop charts at #95 in March of '63. Martelli left to get married and The Demensions were no more.

Review 1
Read, write and discuss reviews... more
Close menu
Customer evaluation for "Over The Rainbow (CD)"
From: Rocco On: 21 Nov 2017

can you get other cd also