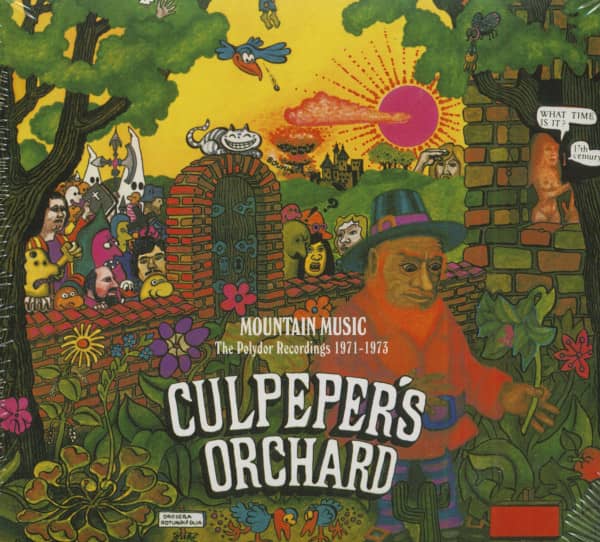 The band was founded in Copenhagen in 1970 with an original line-up of CY NICKLIN (vocals, guitar), NEILS HENRIKSEN (lead guitar, piano), MICHAEL FRIIS (bass, organ, flute) and RODGER BARKER (drums, percussion).
The Englishman Nicklin lived in Denmark since 1963 and had also recorded with Sandy Denny and the Strawbs while this band was based in Copenhagen.
In 1968 he had been a founding member of another legendary Danish band, DAY OF PHOENIX, but had stopped forming his own band with the Danes Henriksen and Friis and the English drummer Rodger Barker.
Culpeper's Orchard signed with Polydor Records in Denmark and released their self-titled debut album in March 1971. The album was a fine example of psychedelic, progressive rock, drawing from a myriad of different influences from rock, folk and the then West Coast bands of the USA.
The album was released in many parts of Europe and subsequently earned its place as a legendary psychedelic progressive album, where original vinyl copies changed hands for triple-digit sums.

Following this successful debut, the band recorded the album "SECOND SIGHT" in 1972, with drummer KEN GUDMAN (formerly with The Savage Rose) replacing Rodger Barker. The album was an equally fine piece of work, taking in more acoustic influences from the US West Coast while retaining a rocking touch.
Culpeper's Orchard performed regularly in Scandinavia at concerts with many major artists, but the band's line-up changed again at the time of their third and final album for Polydor, "GOING FOR A SONG", which was recorded in the fall of 1972.
Neils Henricksen left the band and was replaced by Neils Vangkilde on guitar.
Nils Tuxen was also recruited for the pedal steel guitar, and British drummer Tom McEwan replaced Ken Gudman.

The album absorbed more influences from artists like Crosby, Stills and Nash and received critical praise, but was not the major breakthrough the band had hoped for.
It was to be the band's last album for Polydor Records. A break followed live performances the following year (which included a performance at the Ragnarock festival in Norway alongside acts such as the Pretty Things and Mungo Jerry).

Three years later, the band recorded a final album in a different style, but their albums for Polydor, and especially their debut, are the ones for which Culpeper's Orchard is best remembered.