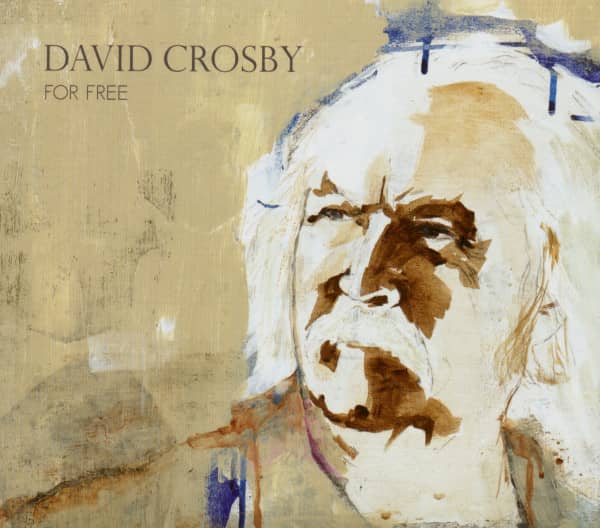 (BMG) 10 tracks, digipack
More than 50 years have passed since Joni Mitchell released the song "For Free" on her famous "Ladies Of The Canyon" album. Around this time David Crosby also celebrated his first successes as a musician.
In 2021, the singer-songwriter chose this song as a template for his own version, moreover for the name of his new album. Here is "For Free."

David Crosby is back: the US guitarist, singer and songwriter continues to work relentlessly on his impressive catalog in 2021.

"For Free" is the name of his new album, the follow-up to 2018's "Here If You Listen," a collaboration with Michael League, Becca Stevens and Michelle Willis.

Ten songs were recorded by Crosby for "For Free," with his son, multi-instrumentalist James Raymond, as well as a number of musicians who had already supported him on his 2017 album "Sky Trails," including saxophonist Steve Tavaglione and drummer Steve DiStanislao. Also featured as guests on the album are American singer, keyboardist and songwriter Michael McDonald (The Doobie Brothers), singer and keyboardist Donald Fagen of Steely Dan and Americana artist Sarah Jarosz. James Raymond also handled the production.

Although much of the album embraces the intricate textures and complex grooves characteristic of the "Sky Trails" band's sound, the title of his new album comes from Crosby's beautifully sparse cover of the Joni Mitchell classic "For Free," in which he is joined by Sarah Jarosz.

"Joni is the greatest living singer-songwriter, and 'For Free' is one of her simplest songs. It's one of my favorite songs because I love what it says about the spirit of music and what compels you to play," said Crosby, who proves once again on the record that his life is dedicated to the pure and powerful alchemy of music. "For Free" is a blend of poetry, prayer and fierce rock and roll that reveals his talent for conveying essential truths with warmth and a sense of wonder.

Whether with the Byrds, as Crosby, Stills and Nash (and Young) or Crosby, Pevar, Raymond (CPR), David Crosby has been making music history regularly since the late 1960s. The singer and musician released his first solo album in 1971, followed by nine more to date, four of them since 2014. The now 80-year-old folk-rock legend will show that his creativity knows no end in 2021 with his new, eleventh solo album "For Free".