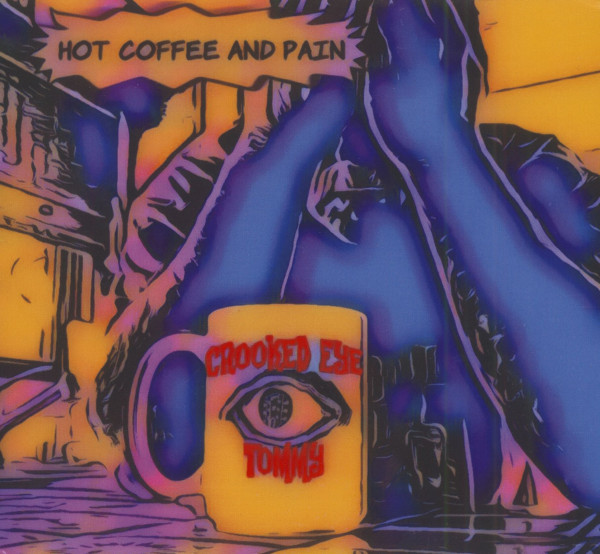 Brother guitar duos are a rare and special commodity in the music world, with such a bond resulting in historic acts like AC/DC, The Kinks, CCR, The Everly Brothers and Stevie Ray and Jimmie Vaughan. Ventura County brothers Tommy and Paddy Marsh formed Crooked Eye Tommy in 2010, becoming six-time Ventura County Music Award winners and two-time International Blues Challenge semi-finalists (2014 and 2019) and in 2020 reached the IBC finals as a duo act.

The set kicks off with a Bay area psychedelia inspired ‘Death Letter Blues;’ the energized track letting us know Crooked Eye Tommy is not an old timey skiffle group but an electric band with dual lead guitars from the Marsh brothers, swirling Hammond B3 from Jimmy Calire, and a heavy groove from the rhythm section of Samuel Corea on bass and drummer Charlie McClure.

Paddy takes over lead vocal on the down and dirty slow blues ‘Sitting In The Driveway,’ wearing his heart on his sleeve as a man struggling with his sobriety due to hard times. The band sound is augmented by a horn arrangement written and played by Calire and saxophonist Craig Williams for the sentimental title track ‘Hot Coffee And Pain,’ with Tommy lamenting his lost love and Williams delivering a sweet solo on the smooth track of pure Memphis soul. A gritty riff pulls us into the mind-bending rocker ‘Twist The Sky’ that features Paddy on scorching leads.

Having old friends sit in is always a special moment during recording sessions and the Crooked Eye boys make the most of having Teresa James lend her immeasurable talents on both piano and vocals for the soaring duet ‘Baby Where You Been?’ trading verses with Tommy while the horns ramp up the drama of the dynamic show stopper. The fellas then give us a glimpse of their live show on the mash up track, ‘Angel Of Mercy,’ that weaves together the Grateful Dead classic, ‘Mr. Charlie,’ and a Johnny Lang tune in between twisty guitar jams.

The brothers mesh both their vocal and guitar skills on the introspective slow burning ‘The Time It Takes To Live,’ before paying loving tribute to Gregg and Duane on the stylish instrumental ‘The Big House,’ which gets its name from the estate that was home to the Allman Brothers Band’s original members, their families, and various friends from 1970 to 73 and is now the band’s official museum. The album concludes with the Sonny Landreth touchstone ‘Congo Square,’ another tribute to sacred ground delivered with a fiery arrangement of driving horns and rhythm.

This fine collection of tunes brewed up for “Hot Coffee And Pain,” will maintain the brothers, Crooked Eye Tommy, on an upward trajectory.