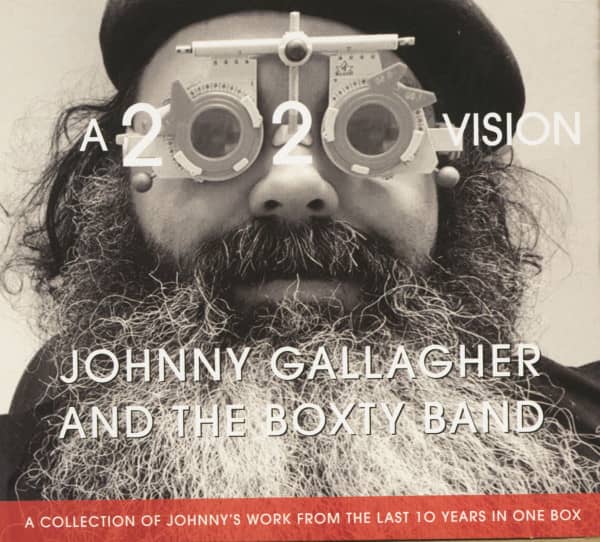 Johnny Gallagher And The Boxty Band: A 2020 Vision (CD)

Irish guitarist and singer Johnny Gallagher enjoys the honour of being counted among the best of European blues musicians, blues rockers and rock 'n rollers. Since the beginning of his career, the artist has played together with his twin brothers in the Boxtie Band.

Now, the blouser, who is always recognisable by his bouffant beard, is releasing a showcase of songs that he has recorded and released over the past ten years. On "A 2020 Vision", the musician shows himself to be versatile, open-minded, entertaining and always at an absolutely high level of quality. Johnny Gallagher and the Boxtie Band release their vision for the current year on Dixiefrog Records, the specialists for roots music and blues.

In the past years, Gallagher released the albums "Whatever is good" (1997), "Johnny Live at Fin McCools" (2002), "Piece of Mind" (2007), "The Studio Sessions" (2014) and "The Pump House Suite" (2018). "A 2020 Vision" now brings together the most important, meaningful and popular songs from these: The Track-List includes 14 selected songs that comprehensively represent Gallagher's oeuvre.

In the Boxtie Band, Johnny plays together with his twin brothers Pauric and James Gallagher. While Johnny's repertoire on guitar and microphone runs the gamut from full, aggressive rock to quieter moments of more tender, introspective music, James always plays his bass powerfully, solidly and punchily. Pauric adds a special touch to the sound with his unorthodox organ and boogie piano style. Drummer Sean dresses the sounds in a remarkable beat corset. Johnny is master of the electric as well as the acoustic guitar. His skills cover a unique range of rock styles and country expressions, masterfully proving himself a true bluesman. Artist and band enjoy an excellent reputation in the scene. Gallagher has already jammed with Buddy Guy. Together with his band, he has opened for Deep Purple, Brian May, Mark Knopfler, Uli von Roth, Tommy Emanuel, Robin Ford, Robert Cray, Chris Spedding, Steve Morse, Marcus Miller and Pat McManus.

Widely Acknowledged as one of the finest guitar players touring the European circuit, Working his way through Festivals, Clubs & Venues all over the Continent. His show with the Boxtie Band is a powerful "Over-driven" Rock'n Roll show, featuring his own original material with stunning personal versions of selected classics.

Johnny's charisma creates excitement on stage with his much sought after "larger than life" presence. He can change from full on aggressive rock to quieter moments of more tender introsprective-music, and through his set he shows his wizardry on both electric and acoustic guitars. His guitar playing covers a unique range of Rock styles and Country pickin, with which he can naturally and masterfully turn himself into a true Blues man. To top it all, Johnny possesses a truly unique and expressive voice which show cases his songs with the dynamics to swoop from a scream to a whisper.

Pauric & James Gallagher are of course the twin brothers of Johnny Gallagher, they have been in the band from day one. Having toured all over Europe for years with Johnny. They are essentially the backbone of the Boxtie Band as they instinctively understand Johnny's music and always know exactly what and where to play in complementing Johnny's lead playing. James plays a solid consistent punchy Bass, always powerful and never too busy. Pauric switches between his unorthidox organ and boogie piano style. And Sean lays down beats with groovy rhythm's and tie's it all together.

Pauric James Johnny and Sean have a force that doesn't appear out of nowhere, Its like an ageing process that takes time to mature, They also visit the unknown on stage, ad-libbing, jamming, improvising. and that's the magic at all their live shows, With James's punchy bottom lines and Sean's groovy swing, Pauric has the freedom to Boogie woogie and lay down his melodies, giving Johnny the scope for improvisation, To jam it out...and it also gives the audience the power to express themselves. That's the ultimate connection, that's what its all about. Its plain and simple Rock and Roll...