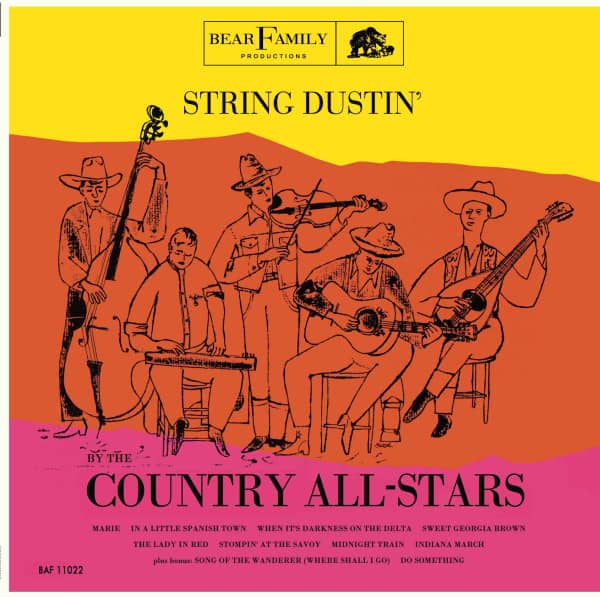 BEAR FAMILY Vinyl Club Exclusive - Limited collector's edition, available exclusively  from Bear Family's Online Shop and Mailorder
• 10inch LP (limited edition - colored vinyl)
• 10 tracks. Unique 10inch LP in our 11000 collectors series
• Producer / guitarist Chet Atkins’ first studio super group!
• Contains two bonus tracks not on original 10“ LP.
• Reproduction of the rare original US album cover art, RCA LPM 3167.
• Painstakingly remastered for highest fidelity and pressed on high quality vinyl!
• Limited to colored 500 copies!complete Country All-Star Sessi
Chet Atkins, Nashville’s legendary producer and country guitar stylist assembled his first of several instrumental recording groups in 1952 with the Country All-Stars, featuring Henry ’Homer’ Haynes on guitar, Kenneth ’Jethro’ Burns on mandolin, Jerry Byrd on steel guitar, Dale Potter on fiddle, and Ernie Newton or Charles R. Grean on bass. Despite the band’s name, pop and jazz, not country material dominates the group’s repertoire including an outstanding version of Stomping At The Savoy which became a jazz standrad through Benny Goodman’s 1936 version.
Stereotyped by the outside world as three-chord wonders, country musicians are actually some of the most imaginative and technically adroit musicians in all American music. The blend of country instrumentation, jazz improvisation, and pop repertoire was never better illustrated than on the 1953 RCA 10-inch album ’String Dustin’ – now back in print again!
The recordings on ’String Dustin’’ were made in 1952 and early 1953. The original 10inch LP record was released in 1953. Not well promoted at the time, these recordings became known primarily to fans of country-jazz instrumentals and collectors of both Chet Atkins and Homer and Jethro.
The original 10“LP release has long been considered a collectors’ item. In 1993 Bear Family released the complete Country All-Stars sessions on CD as BCD 15728. Now, in 2019, we have reproduced the original RCA album with two bonus cuts in our special ‚Vinyl Club Exclusive’-series of high-quality re-issues, strictly limited to 500 colored copies, worldwide!

the bonus tracks are SONG OF THE WANDERER and DO SOMETHING! You forgot to mention in the promo text. Cann't wait to get a sample, my original has some serious cracks ;-)

Write an evaluation
Evaluations will be activated after verification.
Press Archive - COUNTRY ALL-STARS String Dustin' (LP, 10inch, Ltd.) - oltimereview
Press Archive - COUNTRY ALL-STARS String Dustin' (LP, 10inch, Ltd.) - oltimereview 5th October 2019 Jane Grandle 0 Comments Bear Family Records, Chet Atkins, Country All-Stars, Homer & Jethro, Homer Haynes, Jerry Byrd, Jethro Burns From the moment the first number kicks in, Chet Atkins’ involvement is immediately obvious. But as Marie progresses it is plain to see that String Dustin’ is going to be a team effort. The Country All-Stars were something of a super-group before super-groups. Chet Atkins, Homer Haynes, Jethro Burns, Charles Grean, Jerry Byrd, Dale Potter and Ernie Newton are names which will no doubt be familiar to many. Chet Atkins and Homer & Jethro are both big names as artists in the country world, while Byrd, Potter, Newton and others can be heard on hundreds of recordings made in the era. This album could easily be dismissed as a novelty: merely a bunch of well known Nashville names put together to sell a record. But it is much more than that. Every artist brings something unique and wonderful. The contribution from all is required here to make the album what it is. A fine collection of instrumental renditions of some well known and some original songs, played by a team of brilliant musicians. Although Country in flavour, it is also a firm contemporary of the warmest jazz of the era, even veering slightly towards rockabilly and rock and roll in places. The skill and versatility of the musicians are incredibly impressive, yet it all sounds so effortless. Originally released on RCA Victor in 1953, there were only 8 tracks. Following the previous re-issue of these songs as part of a more extensive CD release consisting of 21 tracks, this limited edition vinyl includes two bonus songs, which feel like a perfect match to the original selection.
08.10.2019
Press Archive - COUNTRY ALL-STARS String Dustin' (LP, 10inch, Ltd.) -now dig this
Press Archive - COUNTRY ALL-STARS String Dustin' (LP, 10inch, Ltd.) -now dig this It's pop and jazz with covers from Irving Berlin to Benny Goodman, and it was no doubt because of this that RCA did little to promote the album on its release, which has therefore resulted in its rarity. No one will be surprised by Chet's ability to play in this swinging jazz style, but fans of the cornball duo Homer & Jethro might find it harder to comprehend. Interviewed in later life, Chet himself was critical of his own playing, but he sounds pretty good to me. I can't honestly sit here and say that I'm a big fan of the album and it won't get much in the way of repeat plays, but you can only admire the intricate musicianship on offer. The more broadminded amongst you and, no doubt, musicians, will find lots to enjoy here. Laid back and almost like front-porch picking if the house was the Prague Opera House, the playing is delicate, crisp and at times inspiring. If this ten-track reissue is your bag, Bear Family brought out a CD in the early '90s with additional tracks, appropriately called 'Jazz From The Hills'. EMMA & THE RAGMEN Headin' Out Country / Mr. Jones / I'm Ready Rampage RR-19-20 The back catalogue of Rampage Records includes releases by Mons Wheeler and Keith Turner plus an album by Emma & The Ragmen back in 2017. This new release features two originals and a cover and all three tracks are hard-hitting numbers. The top side is a growling rocker with great stinging guitar, excellent vocals from Emma and a catchy chorus. 'Mr Jones' is a meaty instrumental with strong guitar and drums. The storming cover of Fats' I'm Ready' has the addition of a sax, presumably Kenny Tomlinson, but the basic packaging has no session details. The vocals are solid and with two hot sax and guitar solos it's another winner. This is a cracking single that is easy to recommend.
05.11.2019
Press Archive - COUNTRY ALL-STARS String Dustin' (LP, 10inch, Ltd.) - musicstreetjournal
Press Archive - COUNTRY ALL-STARS String Dustin' (LP, 10inch, Ltd.) - musicstreetjournal Country All-Stars String Dustin' (vinyl EP) Review by Gary Hill Chet Atkins is a legend within and without country music. In 1952 he put together the Country All-Stars and recorded this set of instrumentals (one song has vocals). The music here is all intriguing. While it's billed as country, and there is country at the core of a lot of it, it really transcends that label, wandering into jazz and more. This is quite an intriguing set of music. This new edition is a 10-inch record on orange vinyl. It's also all class.
03.12.2019
Similar products Customers also bought Customers also viewed
Similar products
Jersey, Jack: Pappa Was A Poor Man - No Regrets (7inch,... Art-Nr.: 45JJ625019