The story of Ray Campi commenced in a most unlikely place for a proud rockabilly warrior: Yonkers, New York, a suburb of New York City. That’s where Campi was born on April 20, 1934, and he lived there until his family relocated to Austin, Texas in 1943. Once he got down there, Campi was sufficiently seduced by country music to make performing his life’s calling.

Campi, who died March 11, 2021 at age 86, caught the music bug early from his cousin, Harold Layman. “Harold was playing accordion and the guitar, and I got a guitar,” said Campi. “He was six years older than me, and we were growing up together. The music started to come out because we met other guys that played. We started those Sunday afternoon sessions at Harold’s house, in Harold’s room. And we’d listen to records.

“I started to hear songs like Arthur ‘Guitar Boogie’ Smith on M-G-M and Hank Williams and Jimmie Rodgers. He had Jimmie Rodgers records he’d collected. He liked bluegrass too. Of course, Hank Snow was our favorite, so he had many of Hank Snow’s records. He brought some of them from Newfoundland, where he was from. So I first heard Hank Snow with Harold, and he became my favorite artist of all time.”

By 1949, Campi and his young pals were experimenting with home recording, using a disc cutter to lay down his earliest country performances (Richard Weize Archives collected them on a 10” LP, ‘Austin, Texas 1949-1950,’ in 2017). Ramblin’ Ray and The Ramblers held down a couple of radio programs on Austin’s KNOW and KTAE in Taylor, Texas, but they broke up in 1952 when he graduated from high school.

Campi had become a dedicated rockabilly disciple when he cut his first single in 1956 for Bob Tanner’s San Antonio-based TNT label. Catapillar and Play It Cool were truly wild rockers, Campi backed by dazzling lead guitarist Johnny Maddox and bassist Henry Hill. “I just tried to think of funny things that would be a cute title that somebody could remember,” he said of Catapillar. And Play It Cool? “It was just an expression that young people used a lot. I just came up with the idea about situations where you had to play it cool.” Drummers were in short supply in Austin, but Doc Shyrock made them superfluous by contributing unique percussion. “He did finger snapping,” said Ray. “He used to do it for fun. I was always looking for different sounds.” Campi would seal off some rockers by replicating the crash of a snare drum with his mouth for a unique ending. 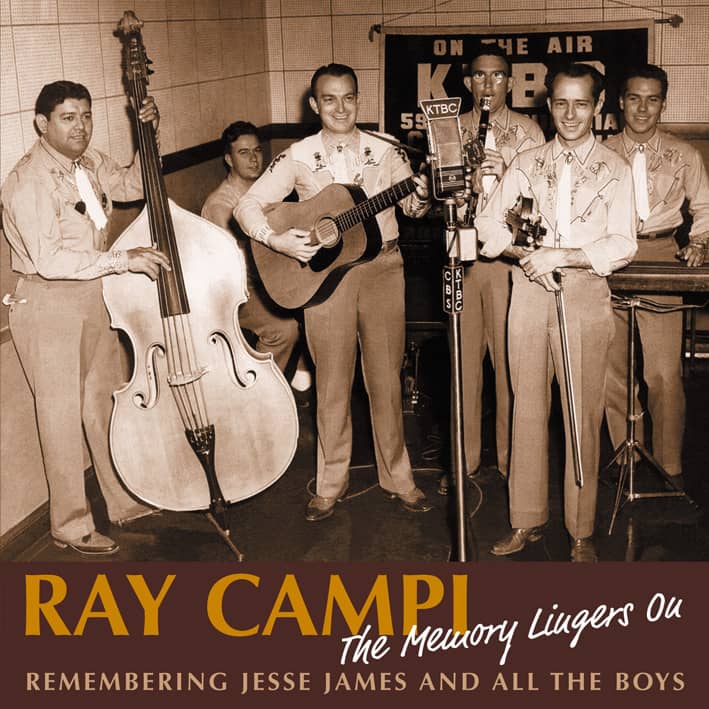 Doc’s percussive proclivities explained the name of Campi’s combo on his ‘57 single for Dot, pairing the self-penned rockers Give That Love To Me and It Ain’t Me. “I didn’t have a name for the band,” said Campi. “Dot Records, somebody down there figured out, ‘Hey, they’re snapping! Just call ‘em the Snappers!’” 1957 also brought a trip back Ea

st, where Ray spent some time at music publisher Hal Fein’s Roosevelt Music. “I stayed there a few weeks in New York, and I went to Roosevelt every day,” said Ray. “I wasn’t able to stay in New York. I had no money, and I didn’t have a job. He wasn’t paying me anything. But Jesse Stone was sort of my mentor.”

My Screamin’ Screamin’ Mimi, Campi’s next blistering rocker in 1958, was issued on the Austin-based Domino logo. “I wrote that thinking of Little Richard, who I met a couple of times,” said Campi. “A really nice fellow. I saw him play at The Brooklyn Paramount, a big Alan Freed show, and Richard was the headliner.” In the wake of the tragic plane crash that ended the lives of Buddy Holly, Ritchie Valens, and the Big Bopper in February of ’59, Austin deejay Jerry Green recruited Campi to cut a quick two-sided tribute to the fallen stars on ‘Pappy’ Daily’s D label, with Ballad Of Donna And Peggy Sue (A Tribute To Ritchie Valens And Buddy Holly) on one side and The Man I Met (A Tribute To The Big Bopper) on the other.

‘The Man I Met,’ I wrote that with Jerry, and the whole idea was to do something that sounded like the Big Bopper, like if a fellow met the Big Bopper and saw his show and was impressed and liked it,” said Campi. ‘The Ballad Of Donna And Peggy Sue,’ two girls lost their loves. See, I told Jerry, ‘I don’t want to write songs with angels flying around in heaven. It’s too corny.’ So it was about the two girls, Donna and Peggy Sue. They’re reflecting on their relationships with these two boys that aren’t there.”

Campi relocated to Los Angeles in September of 1959. He joined Perry Botkin, Jr. and Gil Garfield as The McCoy Boys on the 1960 Verve single Our Man In Havana and sang the flip, another novelty about habitual criminal Caryl Chessman called Reprieve Of Love, on his own. “As soon as the record came out, they executed Chessman,” said Campi. “The reprieve only lasted about two weeks.” His next single under his own name later that year for Colpix, pairing Hear What I Wanna Hear and French Fries, ostensibly had a slightly longer shelf life (Botkin arranged both).

Apart from an early ‘60s stint in New York, Campi planted deep roots in L.A., working a series of day jobs prior to embarking on a half century of teaching school and rocking up a storm on the side. He got in on the ground floor of the ‘70s rockabilly revival, recording prolifically for Ronny Weiser’s Rollin’ Rock label (Bear Family reissued two of his best albums for the label on its 1990 CD ‘The Eager Beaver Boy/Rockabilly Lives’) and perfecting the art of slapping some of the meanest upright bass in the genre.

Campi was a particularly potent draw in Europe over the decades, regularly touring Great Britain from 1977 on. Bear Family released several CDs of his contemporary work, notably tributes to too-often overlooked Texas country music pioneers Jimmy Heap (‘Taylor, Texas 1988’) and Jesse James and All The Boys (‘The Memory Lingers On’). A music historian when he wasn’t busy making music himself, Campi maintained a vast archive dedicated to his own recording legacy—a real rarity among musicians.

His was a dedicated rockabilly legacy well worth celebrating.
--Bill Dahl