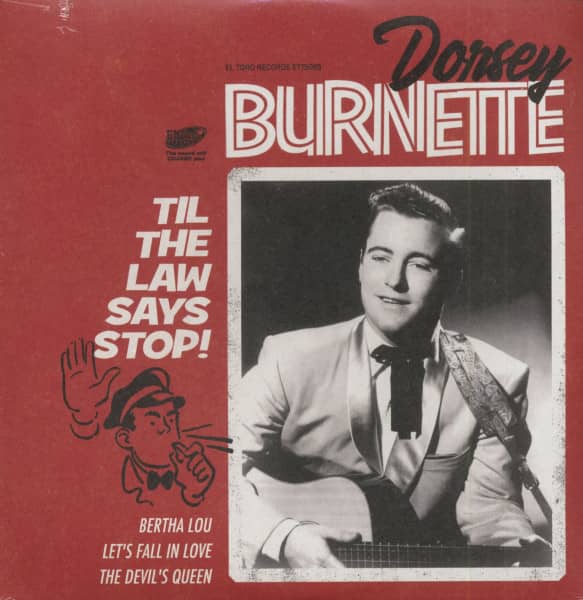 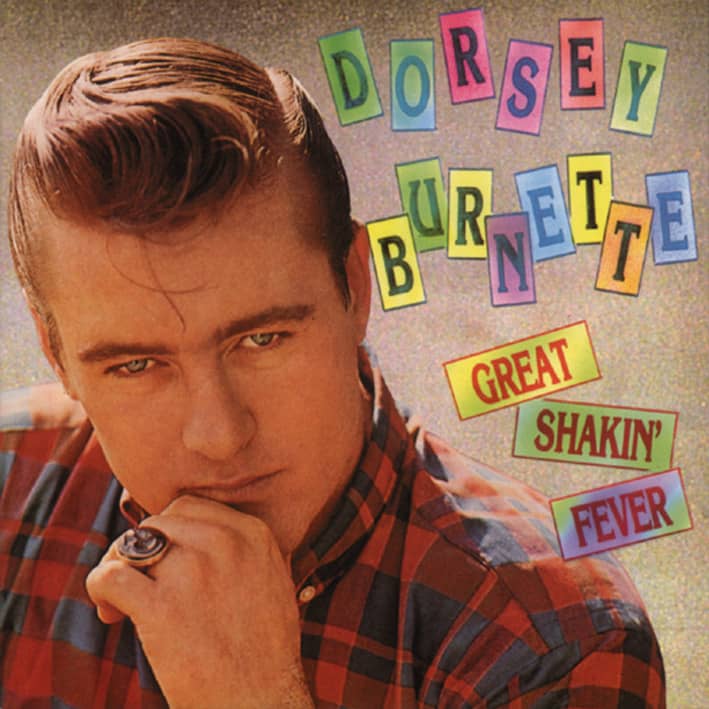 Johnny and older brother Dorsey Burnette were from Memphis, the cradle of rockabilly, where they had worked at Crown Electric shortly after the departure from that company of truck driver Elvis Presley. Together with guitarist Paul Burlison, the brothers had formed the Johnny Burnette Trio, a group that would become more influential than famous. The group eventually split, with Dorsey, then Johnny, and their families moving to Hollywood. "They waited in front of Ozzie and Harriet's place," says Dorsey Burnette's son, Billy, "and when the family came home, they said 'We've got songs for Ricky.' Ozzie told them to come to the office the next day." The rest, beginning with Nelson's recording of Waitin' In School, is several pages of history that includes numerous hits for Nelson, and successful solo careers for both Dorsey and Johnny Burnette. Before that, notes Billy, "They were starvin'; working at gigs like the Long Beach Pike [an amusement park] until they got the gig

After leaving the epochal Rock 'n' Roll Trio, Dorsey went to California, and that's where he made these sides. Recorded in 1961 for Era and Dot, these 25 sides capture Dorsey mellowing a little, but still able to shake it up--as the title track shows. Principally known as Ricky Nelson's songwriter at the time, Dorsey had just broken through with Tall Oak Tree when these sides were made. Titles include Raining In My Heart, Don't Let Go, Buckeye Road, The Rains Came Down and his Elvis tribute A Country Boy In The Army.

The Burnettes were well placed to be in the vanguard of the rock 'n' roll explosion. Johnny and his older brother Dorsey were two of the very few Memphis rockabillies actually from Memphis. Dorsey was born on December 28, 1932 and Johnny (or John Joseph to give him his full name) on March 28, 1934 (although when Johnny filled out his application for a Social Security card in 1951, he gave his birthdate as March 25, 1934…and when he became successful on Liberty, he gave his birthdate as 1938). Their parents were Willie May and Dorsey Burnett, Sr. (the 'e' was added later). Dorsey was a distant relative of frontiersman Andy Burnette, who never achieved the legendary status of Daniel Boone or Davy Crockett, but was nevertheless the subject of a Disney TV movie in the 1950s. Dorsey, Sr. and Willie May were from Birmingham, Alabama. Both were stories in themselves. Willie was born on August 11, 1898, but her parents died before she was two years old, and she was fostered out to an aunt who married her off to a traveling evangelist named Sparks when she was thirteen. They had four children, but Johnny and Dorsey barely knew their half-siblings. Sparks took them to California, and they remained estranged from Willie. Apparently, Sparks died insane. When Willie was thirty years old, she met Dorsey Sr., then recuperating from a mining accident. He had been trying to push a fellow worker from the path of an oncoming coal car and had lost part of one hand, leaving just his thumb and index finger, like a lobster claw. Willie nursed him back to health and they married. During the late years of the Depression, they hitchhiked across the country, and, at one point, were picked up by the gangster Pretty Boy Floyd. They spent several days with Floyd in a motel court in Oklahoma or Arkansas. When he left, he gave them fifty dollars, which they had to explain away to the police when they arrived. At some point, Dorsey and Willie moved to Memphis and started a little business selling sandwiches. When Johnny first remembered, they lived in the north end of Memphis. The house was small. "Dad built it hisself," said Johnny. "It looked like a matchbox. You could throw a cat through it." It's possible that the Burnettes actually lived outside the city limits because they don't figure into the city directories from the 1930s. 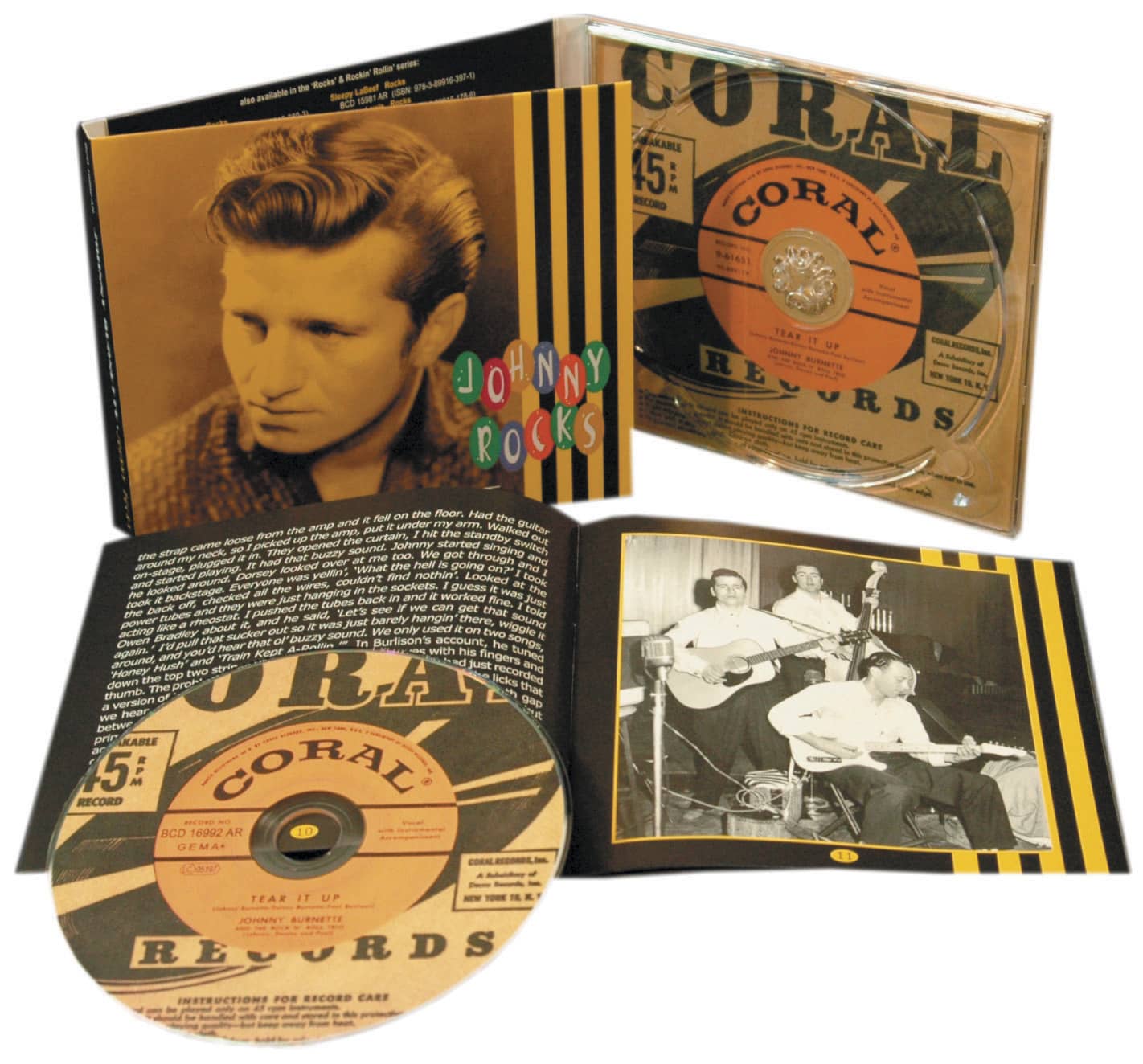 Dorsey Sr. gave Johnny and Dorsey a pair of Gene Autry guitars in 1939. In an unerring foretaste of things to come, they broke the guitars over each others' heads. "Dad went out and bought us two more guitars," Dorsey said later. "He said, 'Learn to play those guitars, you can be like those folks on the Grand Ole Opry.' We started playing parties, little dances, and weddings. We made little or no money, but we had a blast doing it." The Burnettes' hearts were in athletics. Johnny was a linebacker in his high school football team and a guard in their basketball team. "The football team was the lowest class football team in Memphis, but a determined one," Johnny said later. Johnny and Elvis' future bodyguard, Red West, engaged in several knock-down, drag-out conflicts on the football field. Dorsey and Johnny took up boxing on an amateur basis and Dorsey apparently reached the Golden Gloves championships. In 1946-1947, though, Dorsey's career was derailed by a stint in the state training school. He and two others were apprehended and his accomplices went to jail, although Dorsey never told anyone what he'd done. He left school in 1949 and began working joe-jobs to help out the family. Johnny left Blessed Sacrament parochial school in 1948, and went to Catholic High.

Johnny's luck ran out early in life, but he seemed trouble-prone from the beginning. He and Dorsey built what they thought was an airplane and tried to fly it off the roof of the house. In 1950, Johnny was involved in a near-fatal accident. His family lived near a drive-in movie theater and he saw a hotrod car skid off the road during a rainstorm. He ran to help, but another car hit the wrecked car, and then a drunk driver plowed into the back of the pile-up, throwing Johnny in the air and knocking him down the road. His liver was ruptured and his ribs were broken, and he was given only a slim chance of pulling through. Recuperation took three months. Then, immediately after graduation in 1951, Johnny became a deckhand on the barges that sailed up and down the Mississippi. In Algiers, Louisiana, he saw a fellow deckhand lose his leg between the barge and the tugboat. Later that Fall, he cut a deal with a used car dealer to drive an Oldsmobile to Los Angeles, but found himself broke and alone on the west coast. He had to hitch rides and catch freight trains back home. One of the trains was involved in a wreck. Johnny arrived home on Thanksgiving morning, 1951.

At some point in the early Fifties, Johnny and Dorsey became more enthusiastic about music. "The git-tar became my life," Johnny said in a Liberty Records biography. "All I could play were the D, G, and C chords, but I never stopped playing them. A much older girl who played the git-tar well, lived right near me and I used to practise with her. I didn't care too much for school but I loved strumming that git-tar. All day long I was just pickin' and grinnin'." The Burnetts lived on Park Avenue, Memphis. Future white blues star Charlie Musselwhite lived nearby, and another neighbor, Al Vescovo, joined Johnny at Catholic High. Vescovo was an aspiring steel guitarist. "Our ninth grade assignment from Father Morgan was to do Edgar Allan Poe's 'The Raven,'" he remembered. "Johnny and I made it into a song, and we played and sang it. Father Morgan really loved it. And we'd go to Lauderdale Courts, hang out with Jimmy and Jesse Denson. Sit and play. Johnny was into Hank Williams, and I was into western swing. I loved Leon McAuliffe. I started hanging out with jazz musicians like Phineas Newborn. I'd go sit in with them on Sundays. I'd be the only white kid there. Johnny really wasn't that much of a musician. Dorsey neither. They didn't like the difficult stuff. I showed them some chords. I was really into studying music, and they weren't."

Johnny and Dorsey formed a duet and landed a show on KWDI in West Memphis, Arkansas. Dorsey told Sanford Brokaw that this was in the late 1940s. Johnny said later that his first appearance was at Millington Naval Base, north of Memphis, but Al Vescovo remembers that it wasn't at the naval base but at a honky tonk off-base. Johnny also remembered going to Nashville to try out for the Grand Ole Opry, only to be told by Hank Snow that it took thirty or forty years to make it.

Scotty Moore played guitar with the Burnettes on a few early gigs, but at this point in their lives the Burnettes seemed to inspire fear more than respect for their musical skills. They were tattooed and it was widely known that Dorsey had done time. In his autobiography, Scotty recalled one of the few times he took a paying gig with them. It was a joint called the Shadow Lawn, which, despite its pastoral name, was a knock-down, drag-out honky tonk in Laconia, Tennessee, about 30 miles from Memphis. "All hell broke loose," Scotty wrote. "Johnny and Dorsey were notorious fighters. They'd been banned from all the Cotton Carnivals. I don't know how many the two of them were fighting—a bunch of them. Dorsey got stuck in his thigh with a knife. I decided then, 'Well boys, I don't think we can book you again around here.'"

In 1949, Dorsey met another aspiring boxer, Paul Burlison, who also fooled with music. Burlison was born near Brownsville, Tennessee on February 4, 1929. "I loved the blues," he said later. "Cottonpatch blues. That's what I listened to. I'd go all the way across town to hear that - and I'd listen to the Opry every Saturday night 'til it went off the air. I never listened much to big bands or pop music." While still in school, Burlison built his own electric guitar by taping a telephone pick-up to his acoustic guitar. "I met Dorsey in the boxing ring," he said. "The Commercial Appeal, the newspaper in Memphis, used to sponsor the Memphis Golden Gloves and I was boxing for the city championship at Memphis City Auditorium. Dorsey was a novice. I'd already won the year before. He comes up and he says, 'you're Paul Burlison aren't you?' He said, 'I'm Dorsey Burnette and I play music and my brother Johnny plays music, and we ought to get together and play sometime. We exchanged phone numbers and everything, but I never did call him." Some two years later, around 1951, Burlison started working live gigs and radio shows with a hillbilly band led by a singer whose name he recalled as Shelby Follin, although the KWEM schedule lists him as Shelby Polin (Social Security records list a Shelby Follin born in Mississippi in 1915 who died in 1959, and no Shelby Polin, so it's likely that Burlison's memory is correct). Follin had a 15 minute spot on KWEM in West Memphis, Arkansas in a timeslot close to Howlin' Wolf (whose real name was also 'Burnett' without the second 'e'). "I played with Wolf on the radio," recalled Burlison. "He really liked the harmonica best and knew he could get beat on the guitar. He was working in the cotton fields near West Memphis and he came into KWEM every afternoon. There were two studios there and I'd be in one with Shelby. One afternoon I put some blues licks in one song and I saw Wolf looking through the glass and he smiled at me. When I got through he walked up and said he liked the way I played. Me and Smokey Joe Baugh played with Wolf that night and that went on for about three months. I even sat in with him and Willie Johnson at a club on 17th St."