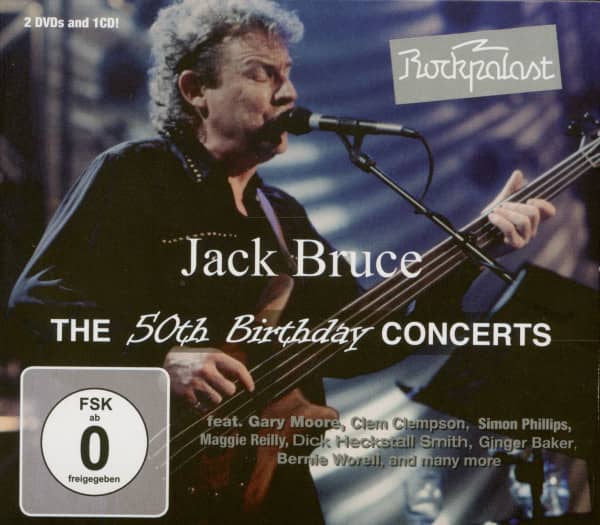 (MIG) 48 tracks, region code: 0
It was a late 50th birthday present. Born on May 14th 1943, John Symon Asher (AKA Jack Bruce) greeted his notable friends on stage on November 2nd and 3rd 1993 at the E-Werk in Cologne The Scottish bassist from Bishopbriggs had invited long time companions such as drummer Ginger Backer, saxophonist Dick Heckstall-Smith and guitarist Clem Clempson. The enthusiastic audience had the opportunity to congratulate him with an extraordinary celebration. In a unique session, Bruce and guests loke drummer Simon Phillips and pianist Bernie Worrell celebrated jazz, rock and blues highlights from the holy Cream days as well as songs which Jack had released on his solo records. From Willie Dixon’s classic “Spoonful” to the magical ballad “Ships in the Night” with singer Maggie Reilly, the interpretations are distinguished by a rare talent for improvisation and intensity. No one had ever experienced “Sunshine of Your Love” in such an opulent arrangement before: brass instruments, percussions and keyboards. In contrast to this was the intimate “Running Thru Our Hands” with pianist Gary Husband. In this spectrum the extraordinary talent of the multi-instrumentalist, composer and singer Jack Bruce, who brought his bass to the front row as a solo instrument, can be seen. This ability had made him stand out when he played in other bands with Alexis Korner, John Mayall and Manfred Mann at the beginning of the 60s, before forming Cream in 1966. He advanced to become the most important writer in this trio with songs like “I feel Free,” “Politician,” and “White Room,” which originated from the collaboration with lyricist Pete Brown. This is the first time “White Room” has been
released in this version.
The late guitarist Gary Moore also performed on one night, stepping in for Eric Clapton he was truly more than a substitute. The performance at the “Rocklife” concert with Ginger Baker resulted in the 1994 studio album “Around The Next Dream”. Other highlights from the birthday bash include the epic “Bird Alone” and “Theme For An Imaginary Western” from Jack Bruce’s first 1969 solo album “Songs for a Tailor.” This Cologne performance shows an impressive width of a remarkable career. The fantastic lineup underlines the meaning and the value of the two November 1993 evenings Jack Bruce presented. This box set includes songs which until now have been lying dormant in the WDR archive, adding alternative versions of some songs performed at the concerts.
The exuberant “Blues You Can’t Lose” as well as the acoustic “Rope Ladder to the Moon” are also to be seen here for the first time. This recording is a legacy of an extraordinary musician, who effortlessly transformed the world by not conforming to one genre and switching between jazz, rock, blues and classical music. He worked with elements of all genres in his music, performed with pianist Carla Bley, conductor Eberhard Schoener and with rock guitarist Leslie West. “The bass made my life easier; I love it,” said Bruce in a Rocklife interview. But now his instrument has fallen silent and another Cream reunion like that in 2005 is no longer possible. The composer, multi-instrumentalist and singer passed away on October 25, 2014 of cancer. His “Life on Earth” ended too soon, but for his fans the charismatic soloist will forever remain a phenomenon in the popular music scene. – Uli Kniep 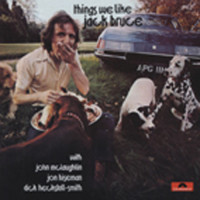 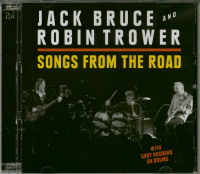 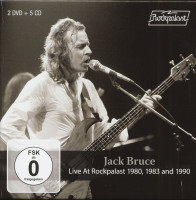