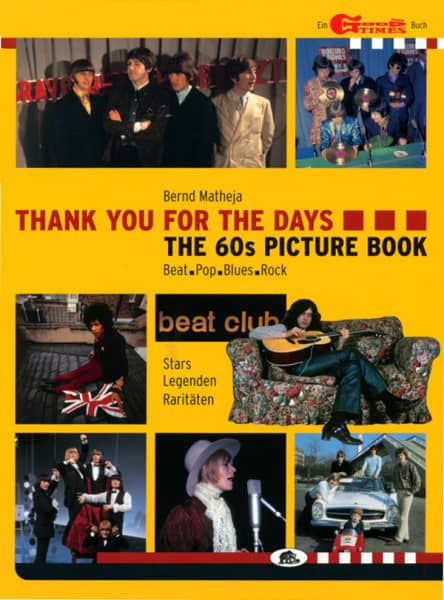 P Secure bonuspoints now
Description Review 5
Description
Thank You For The Days The Sixties were the most important decade in the development of pure... more
Close menu

Thank You For The Days

The Sixties were the most important decade in the development of pure pop music. New directions, new fads and trends, new sounds. And, most of all, new faces ...almost weekly. Many of those new faces are still remembered. There have been many books on Sixties pop heroes. Why another one?

The book is divided into seven chapters:

Still not convinced you need this book?

Here are some more names: World Of Oz, Procol Harum, Marbles, Marsha Hunt, Casuals, Raymond Froggatt, Showstoppers, Free, Rocking Ghosts, Tielman Brothers, Sam The Sham And The Pharaohs, The Young Idea, David &&, Jonathan, Grapefruit, Liverbirds, Traffic, Edgar Broughton Band, Blizzards, The Nice. Thank for the Days is the work of music archaeologist Bernd Matheja. Since his highly recommended book 1000 Nadelstiche (plus its CD companion series) and the multi-volume CD projects Pop In Germany and Smash! Boom! Bang! Mathejas name has become synonymous with formidably well-researched Sixties projects and incredible research. This time, Matheja would like to acknowledge the help of the music magazine Good Times. Many items were borrowed from their files, and this book would have been impossible without their help.

Review 5
Read, write and discuss reviews... more
Close menu
Customer evaluation for "Thank You For The Days ... - Bernd Matheja"
From: Dieter F. On: 30 May 2020

Write an evaluation
Evaluations will be activated after verification.
Weitere Artikel von Thank You For The Days ...
Graphische Träume: 800 film posters of German and international... Art-Nr.: BFB10022