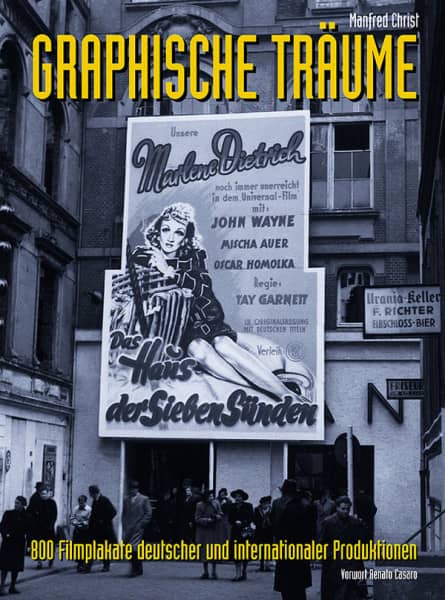 ......painters are true masters, and so in their way are movie poster designers. Graphic designers had to understand the public's taste, then make them go to see movies.

But the graphic designer’s art was always underrated because movies come and go so quickly. At best the designers were termed commercial graphic artists … odd job men for celluloid dreams.

It took quite a long time – as rising auction prices reveal – for designers to get the recognition they deserve for what they produced in the 1950s and 1960s. Posters are true masterpieces. Lettering, design, and photographs of the stars. That's what makes their work true works of art: a perfect synthesis of art and commerce.

An increasing number of people are interested in poster art, but who has enough money to get the originals and enough time to find them? For far too long too many of these posters were thrown away – very often by those who should have taken care of them. It's private collectors who try to save these cultural artefacts – and they’ll often give their last clean shirt for it.

The new book by Manfred Christ, one of the most important German collectors, gives us a look at the apogee of the movie star era. Those who are die-hard collectors and those who’re not will be captivated by the magic and fascination of the poster maker’s art.
Renato Casaro was one of the most famous film poster painters of the 1950s to 1970s and was responsible for posters for the Bud Spencer and Jean-Paul Belmondo films. This book is also very interesting for foreign countries, as it contains almost no texts, but is full of pictures of movie posters. A must for every cineaste!
FOREWORD
These were truly good times for film poster painters - those fat years 1950 to 1970. There was a wealth of films for a wealth of cinemas - each year at least 250-300 films of all kinds and colors came to the then urn the 6000 German movie theaters - often real palaces with large auditoriums and often over 1000 seats. Going to the cinema was an event - for every taste there was the right film in the program - film was (and still is) a mass medium.
At that time there was also a remarkable film production in the European countries, which was not inferior in its significance to American productions, and every film needed its poster, which conveyed the message to the people, stuck to the poster columns.
At that time it was customary to equip the same film with its own poster in each country. It wasn't the time when you had to find ideas for a poster - you had to transport all the film content on a small area, match the audience's taste and mentality to motivate as many people as possible to go to the cinema - a big responsibility and a job that looks much easier than it is.
I was still very young at that time and never had any other career wish than to paint film posters. By the way, my very first film poster was created for a German film: `Zwei blaue Augen' with Marianne Koch. I worked in Italy for the then very active Italian film industry. Neorealism, Rossellini, de Sica, Fellini revolutionized cinema and the taste of the public.
I was lucky to be able to enter an international market quite early with the poster order for the film 'The Bible'. This confronted me with the task of thoroughly studying the market situation, because the poster was used for a globally operating company, so it should correspond as closely as possible to every mentality. Germany has always been an important market, and so of course I also dealt with film posters created by German poster artists.
In Germany, as in my homeland Italy, really great masters worked, which were inspiration for me and awakened my young ambition: Litter, Rehak, Wendt in Germany, plus Ballester, Martinati and Capitani in Italy. They all belonged to the same generation - born into the most wonderful time that cinema had ever known, when you could create posters for the best films...
Renato Casaro Marbella